Cookies may have served as a bit of an incentive for about two dozen Langley kids to learn about municipal elections and cast their vote this week – but it wasn’t their only motivation.

Most of the kids participating were just anxious to learn, said Judi Vankevich – known locally as the Manners Lady – who teaches a variety of life skills courses, primarily to children.

Over the course of two days this week, she gathered 22 children together – ages six to 12. Some were from her neighbourhood, some from a local Christian school, several are home-school kids, and a few are family friends who all came together for a lesson in civic politics.

Without getting into any details about the individual Township of Langley candidates or their views on local issues, Vankevich explained to the elementary-aged students the importance of engaging in the electoral process.

It means more than just simply getting out and putting a tick on the ballot at the voting stations once you turn 18, she told the kids. It’s about deciding as an individual (or as family) who and what they support and getting out to help ensure those people are elected.

“It’s all about encouraging them to be part of the process,” Vankevich said, calling citizenship an important life skill that needs to be taught much earlier in life.

“This totally is important,” she said. “We live in a democracy. Democracy’s a gift… We are not training our young men and women to be members of a civil society.”

Usually, Vankevich teaches a longer course that includes a citizenship component. But several friends had been asking specifically about citizenship ahead of today’s election, so she opted to scale back her program and offer two informal lessons in her Brookswood homes this past Tuesday and Thursday.

“We need to get involved in our country and community, and our children and teens need to see that we care and are involved. We need to discuss the issues as we are driving to school or over the dinner table – to help our children become informed and engaged,” she elaborated.

“The results don’t matter, but getting them engaged does,” Vankevich said, anxious to also teach them that getting involved in a campaign at an early age can also be fun.

“This is a foundation of our civil society,” she said, anxious to have children use the power of the word to debate and speak their mind on issues, to ask questions, and to “truly get engaged.”

It was also about teaching that it’s okay to have different points of view, and that it’s healthy to engage in civil debate, she added.

Part of this week’s lessons included learning the difference between municipal, provincial, and federal elections. She also explained how people become candidates, and the importance for citizens to find out about all the candidates and to make sure they pick people who represent their values and interests.

“Go hear them speak, or look up their speeches on the internet,” she said of the candidates. “Study their websites and read the text of their speeches (not just the 10 second sound bites on TV.) Go to their Facebook page and also read their press releases and Twitter feeds. Look up what they stand for.”

She drew a parallel between casting a vote for someone and hiring a staff member.

“It’s election time! Voting for a candidate is like hiring a new employee. Each of us is like the CEO of a company – and we are about to hire the staff to run our community for the next few years. That hiring date is Saturday, Oct. 20. And, if we don’t get involved in the hiring of our civic leaders, someone else will do the choosing.”

Vankevich also emphasized to the kids that even at a young age they can get involved in campaigns, whether that’s going door-to-door to deliver flyers or attending public political forums.

At the end of her lesson, Vankevich gave each of the kids an actual ballot (specially developed for students) with all the local Township council candidate names on it and invited them to go behind the cardboard shield to cast their vote.

The votes were never tallied, but the kids walked away with a better understanding and appreciation for civic politics – and a Skor cookie. 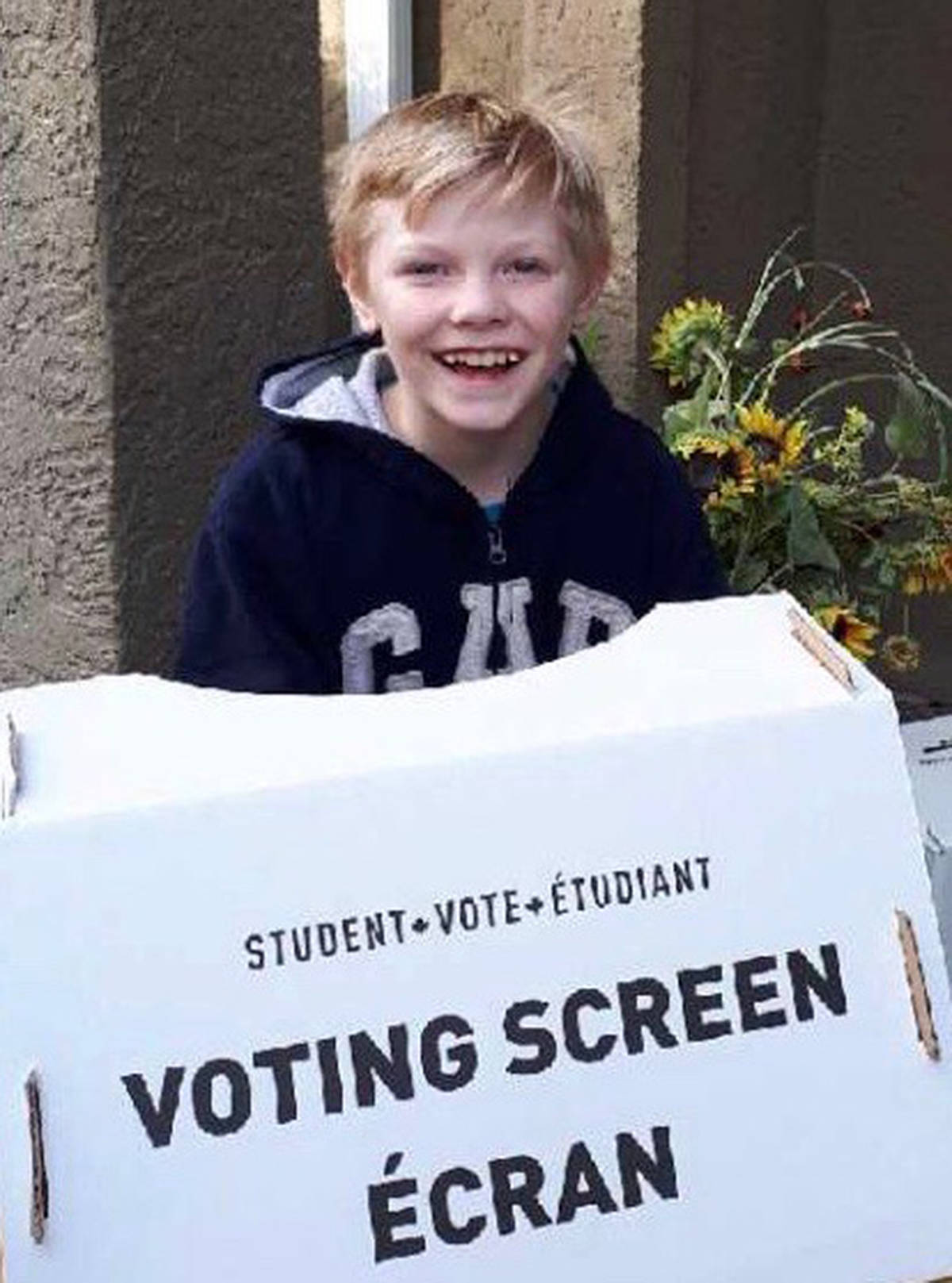 Ajay Teschier, eight, was all smiles after he voted in an impromptu mock election in Brookswood Thursday. (Special to the Langley Advance) 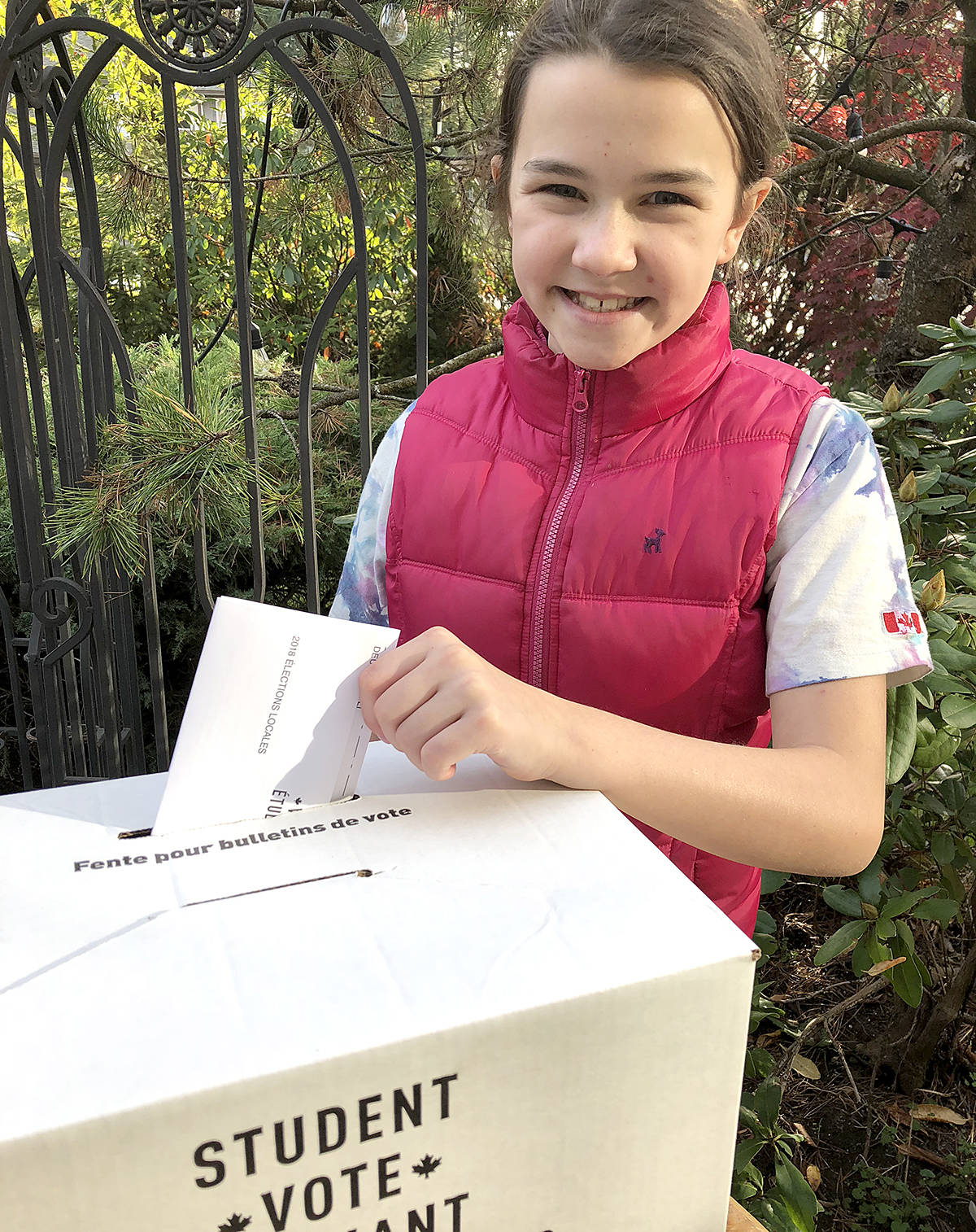 Brookswood’s Judi Vankevich offered a civics lesson to young kids she knew, then set up a fake voting station in her backyard. Among those participating in Thursday’s mock election was 10-year-old Sophie Bouchard. (Special to the Langley Advance)

ELECTION DAY: Here’s where to vote in Langley

VIDEO: Voting underway in the Langleys