A customer of the Langley City Scotiabank branch took a step inside and halted at the sight of a sizable crowd of people.

“We’re open, come on in,” Lesly Tayles said, directing him to a teller.

Tayles, Scotiabank senior vice-president of the B.C. and Yukon region, was on hand for the recent opening of the new branch, located at 20151 Fraser Hwy.

Tayles said the site was chosen because that was “where our customers are moving.”

“We are proud to invest in Langley,” Tayles added.

Langley is one of the fastest growing communities in the B.C. market, she said.

The old branch in the Highland Plaza, which opened 50 years ago, was showing signs of age despite repeated renovations and updates, Burkinshaw said.

“There was only so much we could do.”

At the old branch, there were eight wickets, which Burkinshaw said made sense back when internet banking and ATMs were not around. But fewer are required in the current era, she explained, noting: “We were only using three or four wickets.”

There are fewer wickets and more space in the new place, with a large ‘team room’ for staff meetings.

There is a new position, ‘universal banker,’ which refers to a staffer who helps customers learn the features of the new facility.

It is also redefining banker hours, staying open as late at 8 p.m. on Thursdays and Fridays.

“It was quite a while before we found the perfect spot,” Lee said.

At the Wednesday, April 17, openig, long-time Scotiabank customer Vern Keller did the honours of snipping the ribbon.

A retired construction workers who gives his age as “81 and a half,” Keller said he’s been with the Scotiabank for almost 50 years – 15 in Langley.

“This is a neat building,” Keller said.“It’s bigger than it looks.”

Burkinshaw said the move to the new 4,000-square-foot financial facility was completed in February, but the official ceremony was set for April to give time for the dust to settle.

The old branch won several awards through the years since it first opened.

In 2014, it was ranked second among all Scotiabank branches within the North Coast and Fraser Valley District, based on several metrics, including friendly customer service. The district consisted of 27 branches.

It was also recognized as the top Scotiabank branch in the district, second in the entire province, and sixth among the 1,000 or so branches across Canada. 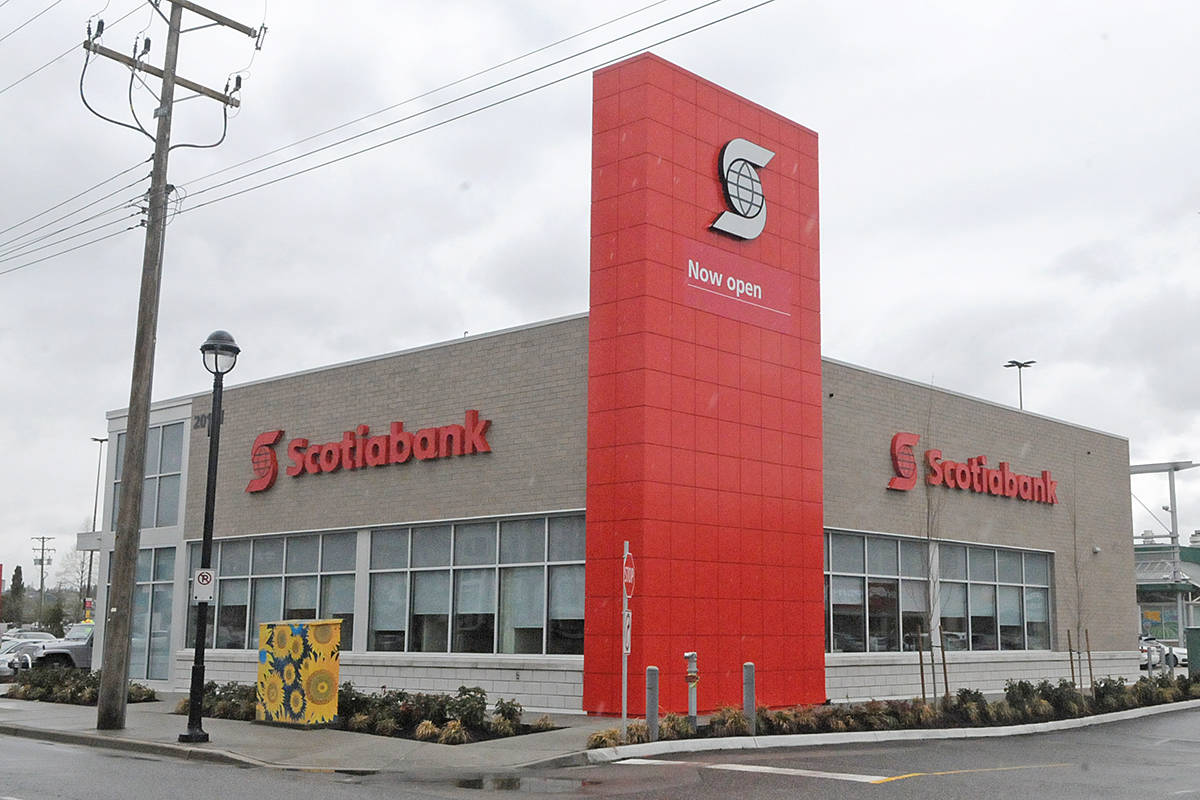