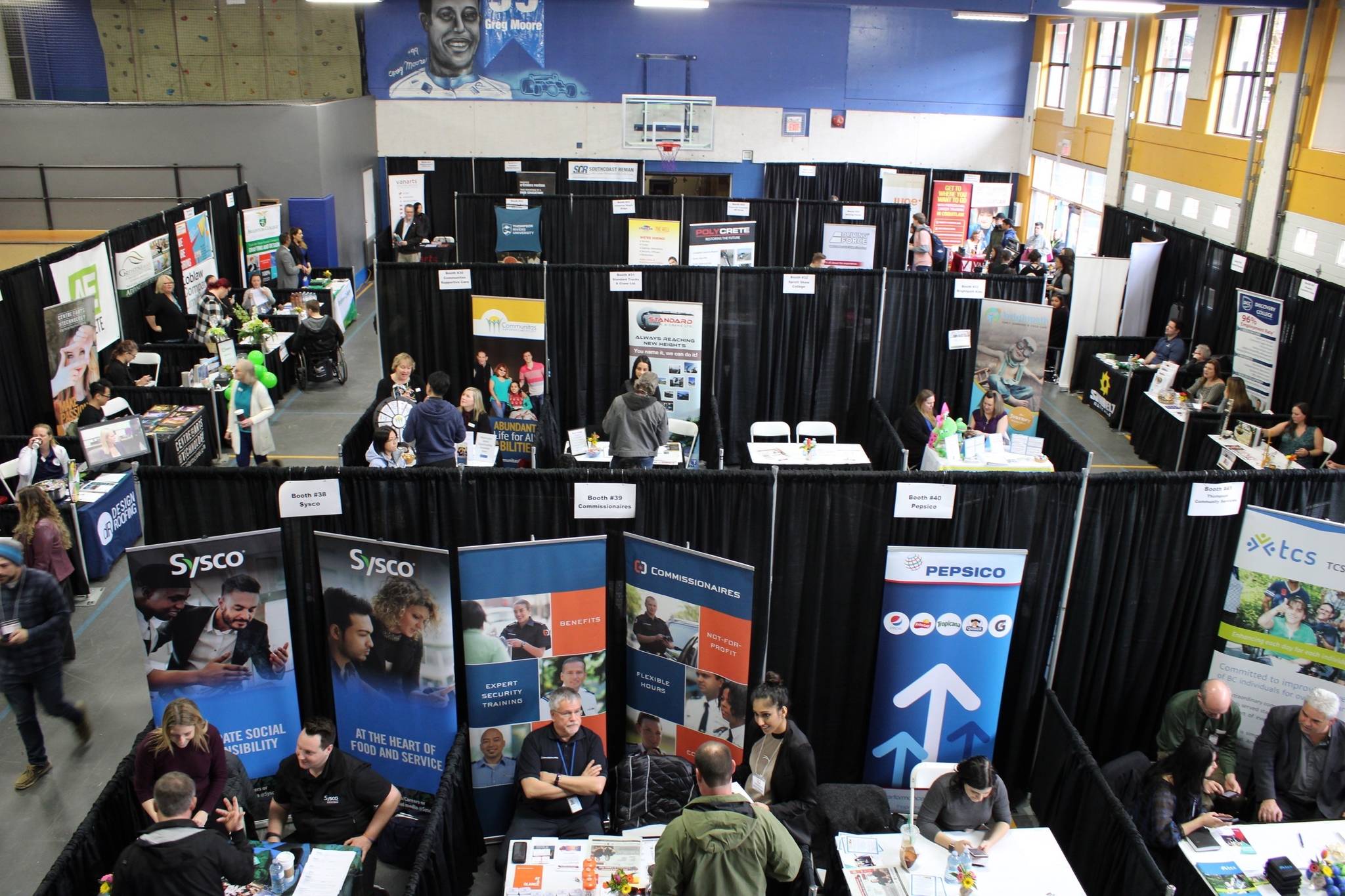 Stop by the Greg Moore Youth Centre from 11 a.m. to 4 p.m. to find your dream job (Photo by Kieran O’Connor/Black Press Media).

Thousands of job hunters are that much closer to landing employment after attending the inaugural Black Press Extreme Education and Career Fair in Maple Ridge on Thursday.

There were 67 companies and educational institutions that had booths at the popular fair.

Positions were being hired for in all sorts of industries including the financial sector, construction industry, automotive sector, cosmetics industry and more.

Sheri Jackson, events manager with Black Press Media, estimated that by about 1 p.m. close to one thousand people had walked through the doors.

Danielle Soleimani, a merchandising supervisor for Frito Lay careers and PepsiCo was at the fair looking for account merchandisers to deliver chips and merchandise to stores between between West Vancouver and Chilliwack.

She thinks career fairs are great because it gives companies time to engage with prospective candidates face-to-face.

“Sometimes there is a barrier when you are looking at applications online,” said Soleimani.

Key characteristics that she looks for with prospective employees are motivate individuals who are self disciplined, enthusiastic and outgoing.

Soleimani’s advice to those looking for work is to highlight on your résumé your ability to adapt to a leadership environment.

And, she says, when interviewing, the cliche about being yourself is very important.

“Because we like to hire folks for who they are and not what they think they should be,” she said.

Robert Dike, a Recruiter for Challenger Motor Freight Inc., a trucking company that specializes in long-haul freight across North America, was recruiting at the fair as well.

Challenger has more than 2,000 employees including 1,500 drivers at four main terminals: one in Dorval, Quebec; two in Ontario including the Cambridge terminal which is where the head office is located; and one in Abbotsford.

Dike enjoys career fairs because he gets the opportunity to explain what truck driving is and speak to people who are actually looking for jobs.

“The online is nice but sometimes people don’t find your website to be able to apply because they don’t type in the correct keywords to find you in the first place,” he said.

Dike said the most important qualities he looks for in a potential candidate is somebody who is willing to learn and also somebody who can balance the time spent away from home with their personal life.

He also thinks that candidates should do the proper research for the company that they are applying to work for.

And one of the best ways to do research, he said, is to call a person like himself and ask about the requirements of the job before spending time and money getting the proper qualifications.

“Once you’ve got your Class 1 there should be no reason why you’re unemployed. But you need to enjoy your job in order to be good at it,” he said.

Michelle Wetherill, the manager of human resources for the City of Maple Ridge, was at the fair looking for potential employees for a variety of roles.

Jobs with the city can range from working on services in the community like traffic lights, to young people who work with children and after school clubs, to compliance by-law officers, planners and inspectors.

However, Wetherill said, most of the new positions that are being created at the city are technical in nature.

“The numerous programs and applications that we run need technical people to support,” she said, like positions in marketing and communication, web design, programming, hardware and software servers, Freedom of Information and positions around data and the housing of data.

One area that the city is always looking to hire for are engineering technologists.

“That is an area province and city wide that is hard to fill,” she added.

Based on the success of success of this years event Jackson is positive Black Press Media will be holding another Extreme Education and Career Fair in the Maple Ridge community next year.

And based on the demand, in a bigger venue.

B.C.’s engineered wood leadership many years in the making