There’s always a lot of movement in Langley’s retail sectors.

It feels like every time I turn around, there are five or six new businesses that are preparing to or have recently opened, and sadly a few others that have closed. It’s probably not too much of an exaggeration. In fact, it’s likely more.

Anyway, a trip to downtown Langley City last week for the ceremonial launch of Discover Langley City allowed me to finally visit a cafe that I’ve been intending to explore for a few years.

If it’s not new, why do I bring this up now?

Well, because Red Velvet Cafe is not new to Langley, but it is relatively new to Langley City – and I finally had a chance to meet the entrepreneur behind it.

Daphne Polancic, who grew up in Cloverdale and settled in Langley back in 2000, first broke into the local retail market in back in 2008.

Fast forward a few years (2014 to be exact) and Polancic was looking for a new challenge. Her daughter was helping manage the clothing store, so she looked to expand her portfolio with the opening Red Velvet Cafe – still in the village, and in fact only two doors away.

Well, as she told me between serving up hors d’oeurves and desserts to the tourism crowd, when the lease on the Fort Langley restaurant neared its end she began casting around for a new location for her cafe.

She wanted to be in downtown Langley City.

“It felt like it was a better fit for me,” she said.

That’s when she picked the current location for Red Velvet – on Douglas Crescent, just east of 204th Street, and began an eight-month renovation that ended with her reopening in mid-October.

“It’s pretty much the same,” she said, noting the menu and staff never changed.

“For the most part, we’re a coffee, sandwich, and soup place,” she added.

She and her five employees keep the cafe going seven days a week.

Following suit, Polancic is planning to close up the Ddbooski in the village, and while keeping the online sales going, she’s hunting for another location in Langley City to relocate the clothing store.

The lease runs out on the Ddbooski location at the end of February.

Now, as it turns out, a drive through the village a week or so ago also brought a new shop to my attention.

Turns out, in talking with Polancic, that it was her former Red Velvet location.

And it’s soon going to be a new bistro cafe run by some familiar Fort Langley faces.

I’ve reached out to them, so stay tuned for more on The Rustic Gourmet, a Fort Langley catering company headed up by partners (in business and life) Simone Hurwitz and Enrico (Kiko) Campani, and their move into the restaurant sector.

While the catering operation appears to have been running since 2008, first in White Rock and now in Fort Langley, they’re preparing soon to venture into new territory with the introduction of the bistro at the corner of Mavis Avenue and River Road.

Speaking of what’s opening and closing in downtown Langley City, did anyone managed to get in during the short-lived run of Summer in Greece Souvlaki.

Located just east of 204th Street, just next door to Home Hardware, this restaurant appears to have disappeared as quickly and quietly as it arrived.

But, there’s paper on the windows, implying something new and exciting might be on its way.

On the subject of quick changes, did anyone notice that Peoples Drug Mart in Langley City Mall disappeared at some point, too.

Around since the summer of 2015, Peoples is now gone – might have to do with the glut of drug stores (almost one on every block in Langley’s retail cores). They’ve been popping up almost monthly around town during the past few years.

Actually, though, this change sounds more like a corporate decision made early last year for Peoples to call it quits after more than 40 years in the industry.

There were apparently 45 independent stores in B.C., and while they closed their retail presence, several of the same operators simply opting to keep going and simply fly a different retail pharmacy banner.

You might be acquainted with that flag, it’s already flying in Aldergrove, Walnut Grove, and Cloverdale, not to mention some 750 other sites across the country. 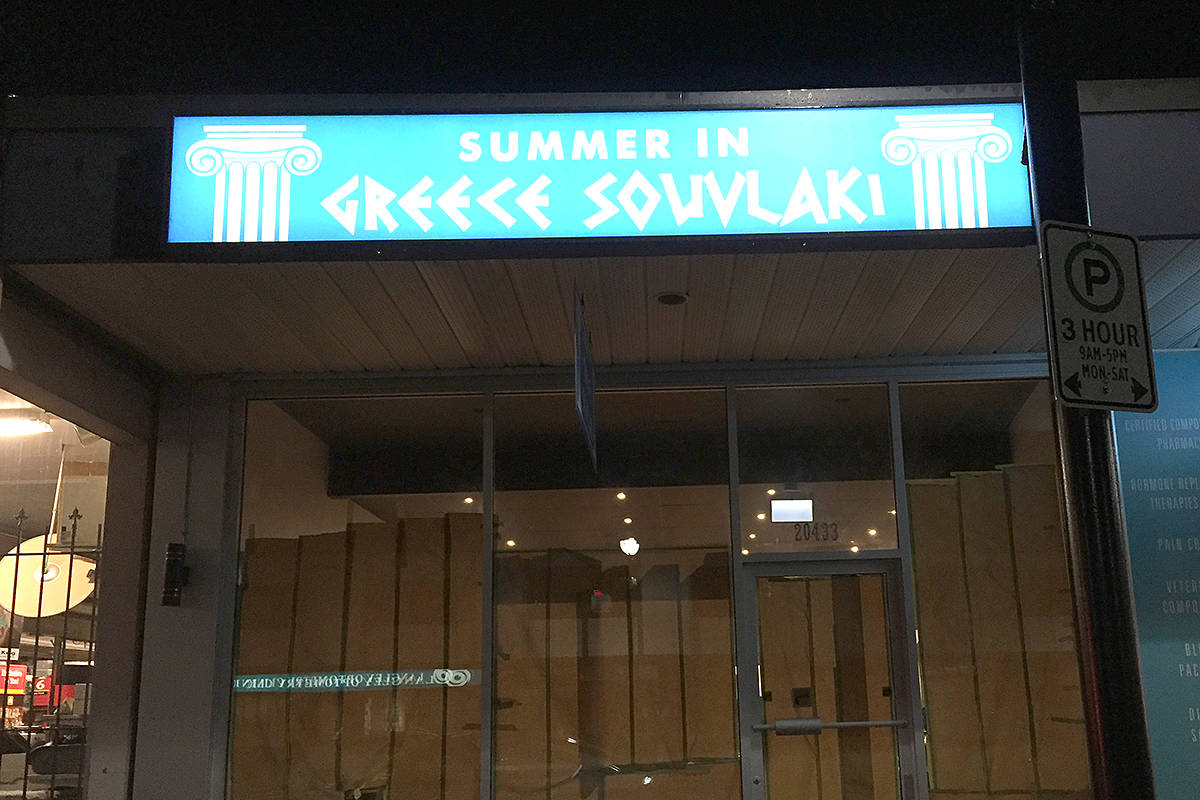 This Greek restaurant on Douglas Crescent in downtown Langley City was shortlived. But paper on the windows indicates something new may be coming. (Roxanne Hooper/Langley Advance) 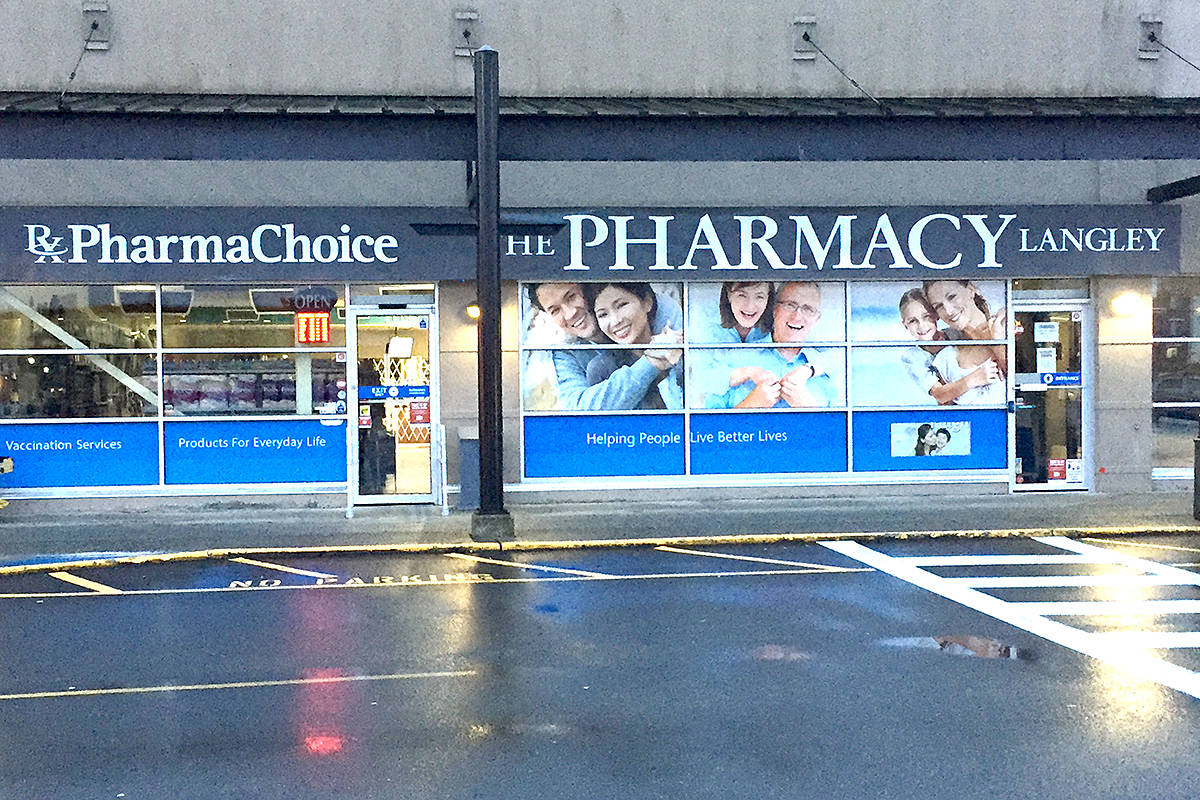 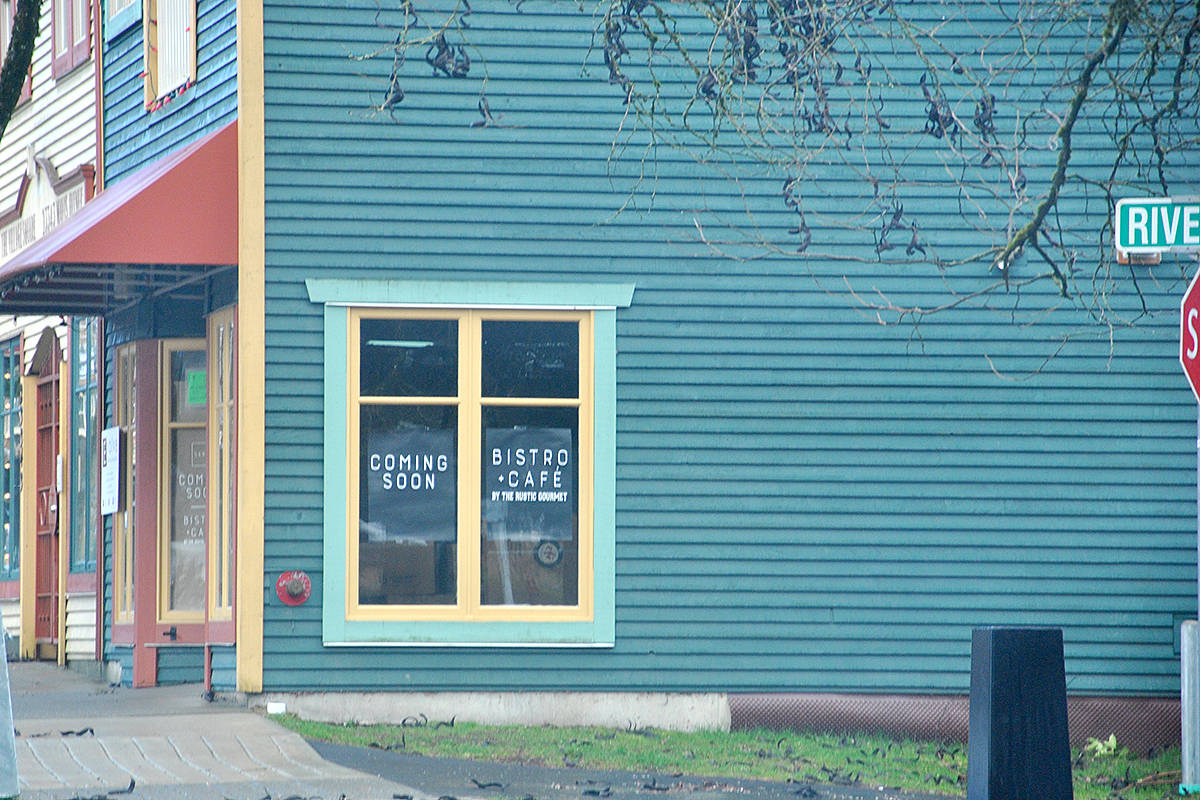 In the Fort Langley spot formerly occupied by Red Velvet Cafe, a couple who run The Rustic Gourmet catering is going to open their own bistro. (Roxanne Hooper/Langley Advance)