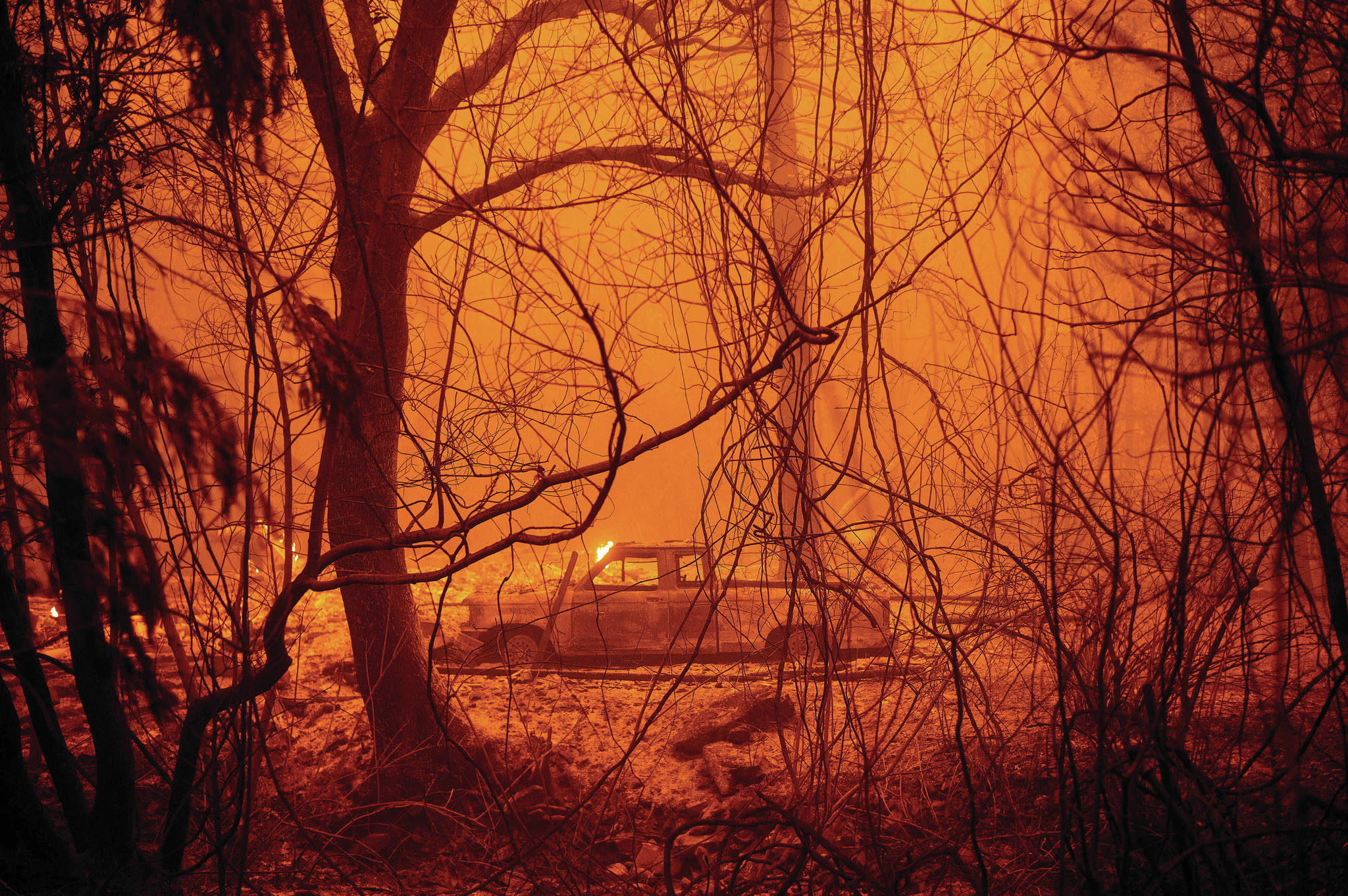 A scorched car rests in a clearing following the Bear Fire in Butte County, Calif., Wednesday, Sept. 9, 2020. The blaze, part of the lightning-sparked North Complex, expanded at a critical rate of spread as winds buffeted the region. (AP Photo/Noah Berger)

Hands up, everyone old enough to remember summers without a steady smoke haze over parts of the west coast.

Not some of the younger folks, though. They’ve grown up with smoke alerts here in Metro Vancouver.

You can find fire-related air quality alerts going back to the mid-1990s in parts of the Fraser Valley. Usually, those were linked to fires close by, like a 1995 fire in Boston Bar that poured haze into the upper Fraser Valley.

But now we get hazy skies every other year, it seems. And the fires are farther and farther away – eastern Washington, Oregon, the Interior of B.C., far beyond the coast.

I was an adult before I saw our skies turn orange in the middle of the day, and stick that way. Now I’ve seen it several more times, across multiple fire seasons.

We’re going to see it again.

When I was young, my family would sometimes head down across the border to a small southern Oregon town called Grants Pass. Not a significant place to the wider world, but my grandparents lived there, and my brother and I had a heck of a time roaming their back 40, turning over rocks and playing in the creek.

My grandparents moved on, and Grants Pass receded into memory.

This week, I found myself Googling the small town. Checking to see if it was still there.

As I write this column, it’s standing. There are fires to the north and south of Medford, the seat of the county directly to the east, and there are several fires to the south in California, just across the state line. But Grants Pass is there, for now.

Parts of the United States, from California through Oregon and into Washington State, are being wiped off the map this year.

What to us is a few days of bad air quality is the destruction of homes, stores, town halls, post offices, libraries, and in some cases, entire communities.

Maybe, if we’re very lucky, there won’t be a fire that does that much damage this year, despite the unprecedented firestorm that’s engulfed the entire west coast of the U.S.

We know that next time, it could be us. It could be Osoyoos, or 100 Mile House, or Hope. We could see a big interface fire get into a major interior city like Prince George or Kamloops, or tear through a park or ravine in Metro Vancouver.

Fire has always been here. But thanks to the climate crisis, we’re now living in the age of fire.

It’s not going to get better, at least not on a human time scale.

These fires are fueled by the climate crisis. Anything we do right now won’t help us, but it might help future generations. I guess we’ll see if we can think ahead that far and act, or if it’s fire forever.