It took 25 people in 1990 to grab the attention of officials from Rotary International, an organization of professionals, mandated to advance “peace and goodwill” around the world.

Back in those days, “we met in a little room up above the Hourglass [what is now Bob’s Bar ‘N’ Grill] with blueberry muffins and coffee,” charter member Brian Thomasson reminisced.

There were five women in the club, charter member Angie McDougall explained.

“We were the first of the Langley clubs to have women at all,” she said proudly.

It was in 1989, just a year before the Aldergrove group’s inception, that Rotary’s council on legislation voted to admit women into its clubs worldwide.

Since then, Aldergrove Rotarians have met Friday mornings at 7 a.m. at White Spot (formerly Carson’s Restaurant) to enjoy breakfast and brainstorm new ways to benefit their community.

At the Rotary’s latest meeting Friday, the group celebrated three decades of friendship and service.

“This club has done so much good for the community of Aldergrove,” said charter member and former treasurer Vic Peters.

“Aldergrove has got to be one of the best places to live,” Thomasson lauded.

Fulton – a retired livestock feed-industry manager – retold a vivid memory from his years as a local Rotarian.

In 2017, Fulton and others from the club travelled to Nepal and witnessed the fruits of their labour in remote communities that previously lacked clean water.

“We actually got to visit some of the people we were benefitting with our donations by giving them fresh water,” Fulton continued.

“The villagers came to us and that night threw a party for us. It was also my 25th wedding anniversary. I’ll never forget.”

Aldergrove Rotary Club has raised a total of $45,000 over the past 12 years to support construction of water systems in some of Nepal’s most remote villages.

Though with the many successes of the club, there were also some flops, charter member Lee Sawatzky mentioned during the meeting.

“Remember that one time we tried to sell lawn chairs as a fundraiser for the fireworks down at the high school?” Sawatzky, also a lawyer, said.

“I don’t think a single chair was rented,” he chuckled among a chorus of others.

Regardless, “many of these guys and gals have become my friends,” Sawatzky said.

“I still get birthday calls from Brian. Every year. Without fail,” he said.

Nearing the end of the meeting, charter member and treasurer Gus Hartl Jr. pulled forth a wooden box the club uses as a donation receptacle.

As coins or cash are dropped in the “happy/sads” box, members share what they’re grateful for, or struggling with.

To the surprise of others in the club Hartl announced it was his dad – Gus Sr. – who had built the box by-hand.

“I can’t believe it’s still here,” Hartl said, tracing his hands over shapes carved into the side of the container.

“It’s one of my treasures.”

Hartl Jr., also CEO of the Aldergrove Credit Union, maintained that Aldergrove Rotary “is way better now than it was 30 years ago.”

“And that is a testament to our work in Aldergrove.”

Rotary, founded in 1905, has over 35,000 clubs currently operating in communities worldwide. 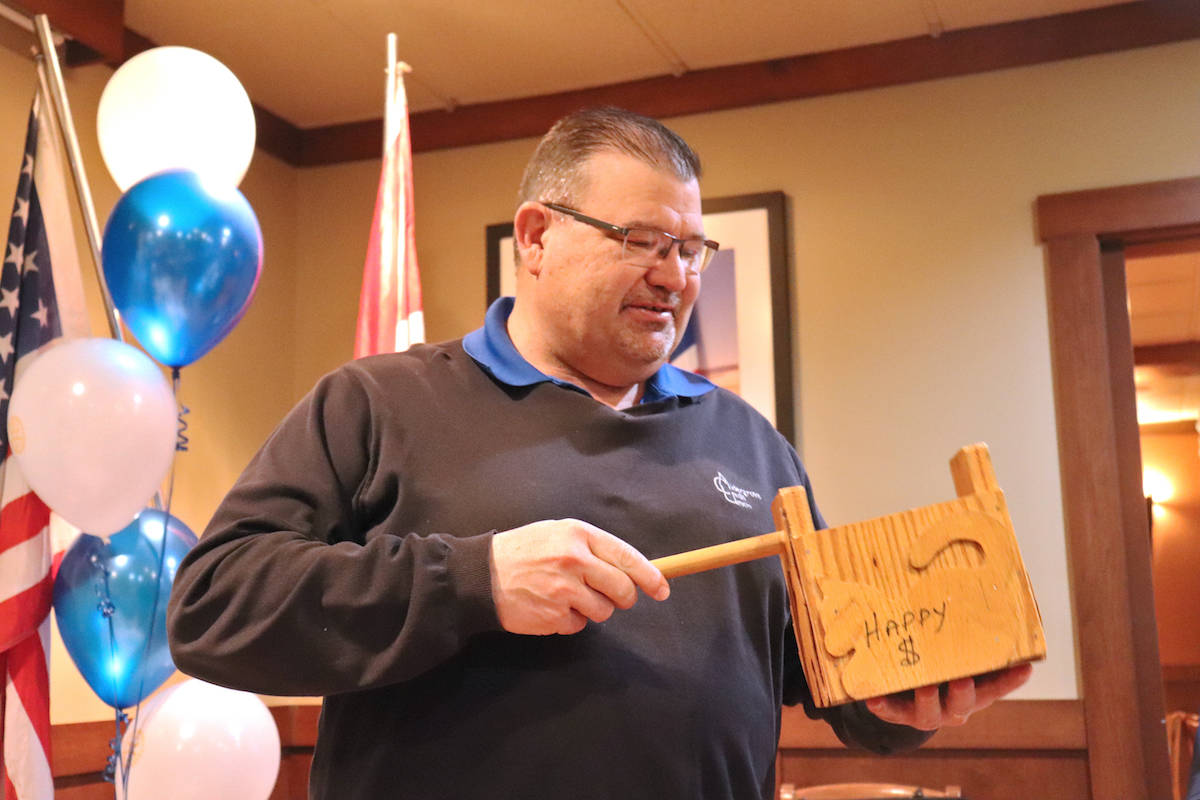 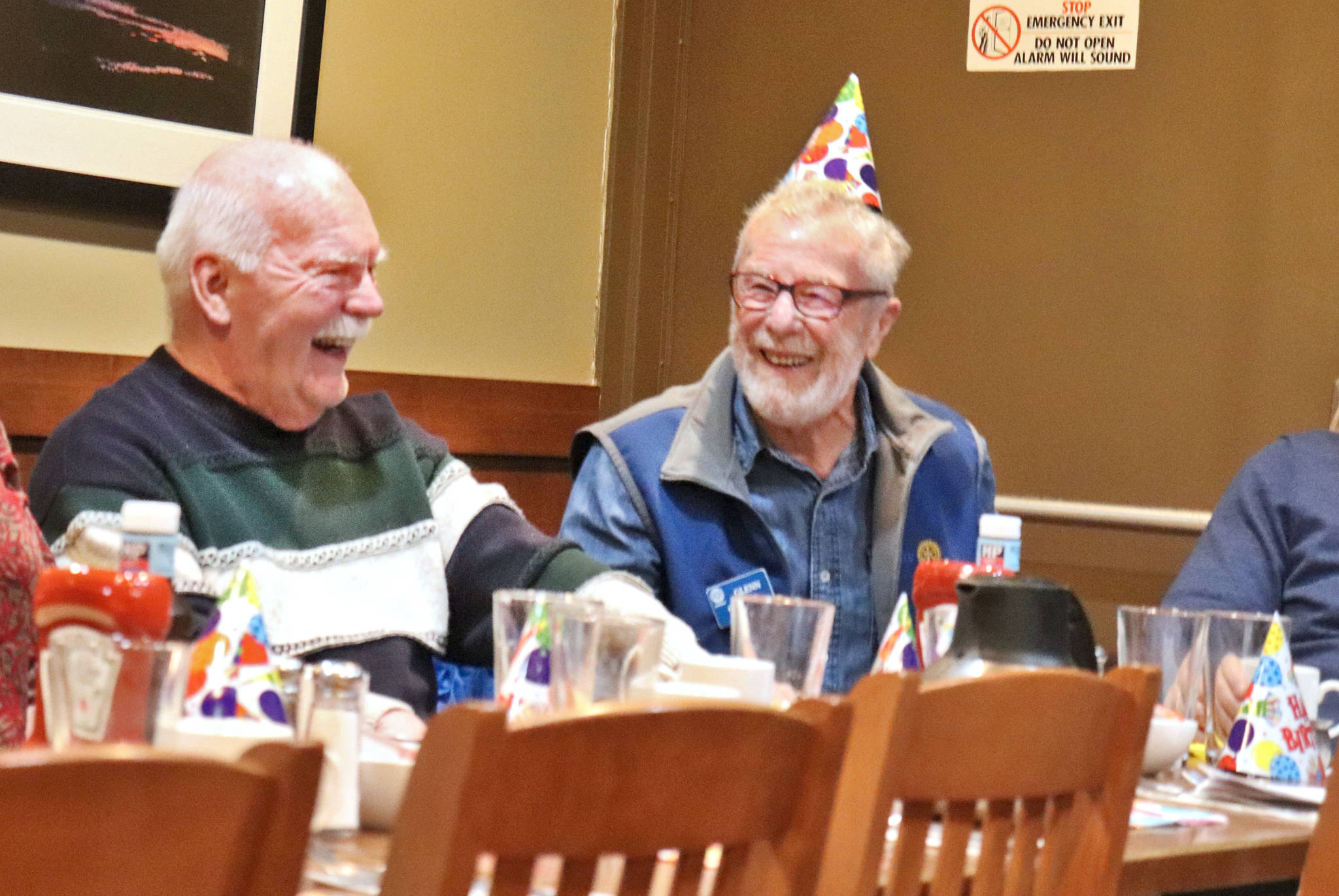 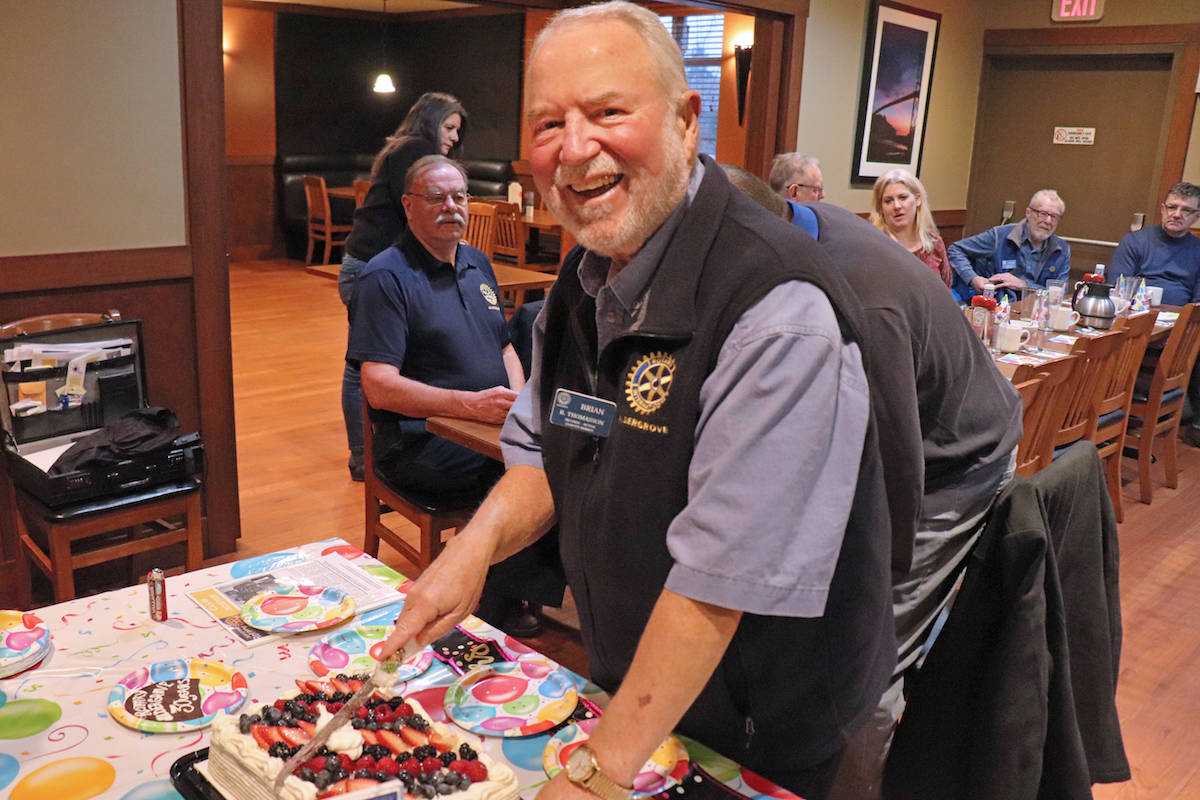