After 29 years fighting fires as a member of the Township of Langley fire department, Capt. Morley Sagert retired at the end of shift on Sept. 30, and said he is looking forward to the time he’ll now have to spend with his wife, Sandra, and his two boys.

In 2006, 15 years after starting his paid-call career in Fort Langley, Sagert was one of the first career suppression firefighters hired by the department – earning his captain’s rank the following year.

Sagert said there is much he will miss about working in the fire department.

“The [people] who I had the privilege to work with on a daily basis throughout my career,” for one, he said.

“The banter around the dinner table, before, during, and at shift changes,” he added to the elements of crew-life that he will most miss.

“So many of life’s problems that we solved over morning coffee, with an equal amount that we probably created.”

When asked for good memories of his career, he didn’t have to go too far back: “It would have to be this past birthday, after training with the guys from Hall #2, we had a medical call in Fort Langley,” related Sagert, 60.

“When we cleared and were heading back to Walnut Grove, for some reason we detoured to Hall #2,” he added.

“I trusted that my operator, Dave, had reason to stop in, so I went with it, and as I was walking into the hall Matt [another of his crew] and my son Kyle [who is a paid-call member of the Fort Langley firehall] were heading out with a birthday cake, as the rest of the Engine 8 and Hall 2 members were singing Happy Birthday. It totally caught me off guard.”

During the course of his time as a career officer in the department, he led fire crews out of all four staffed firehalls – saying he preferred Hall #4 in Willoughby – for its variety and volume of calls.

“Responding to someone who is having their worst day ever, and they are depending on us to come and solve whatever issue they have, and having the ability to solve their problem,” Sagert said, explaining what he’s appreciated and enjoyed about working in the fire service.

There have been many challenges and experiences that arose from the variety of events he helped solve.

“The fact (is) that no two calls were ever exactly the same,” he said. “They may have had similarities but were never alike.”

The Township fire department recently issued a call for career firefighters, and Sagert has advice for those coming up in the fire service.

“Be like a sponge, absorb as much as you can,” he offered.

“It will be overwhelming at times. but do your best to take it all in. Don’t be afraid to make mistakes during training, because it’s expected and mistakes usually only happen once.

“Learn from your mistakes, ask questions, and if you feel as though your crew is pushing you, it’s because they want you to excel. And don’t get caught up in the politics as a probie. Lastly be safe and have fun.”

Sagert said retirement will see him rack up more miles on his road bike, create functional pieces as a woodworker, and continue to work on a 1964 Falcon he bought in 2016.

Morley and Sandra will also be taking the opportunity offered by retirement to travel – Italy and Newfoundland being on their bucket list.

– Jhim Burwell is the Township of Langley fire department historian. 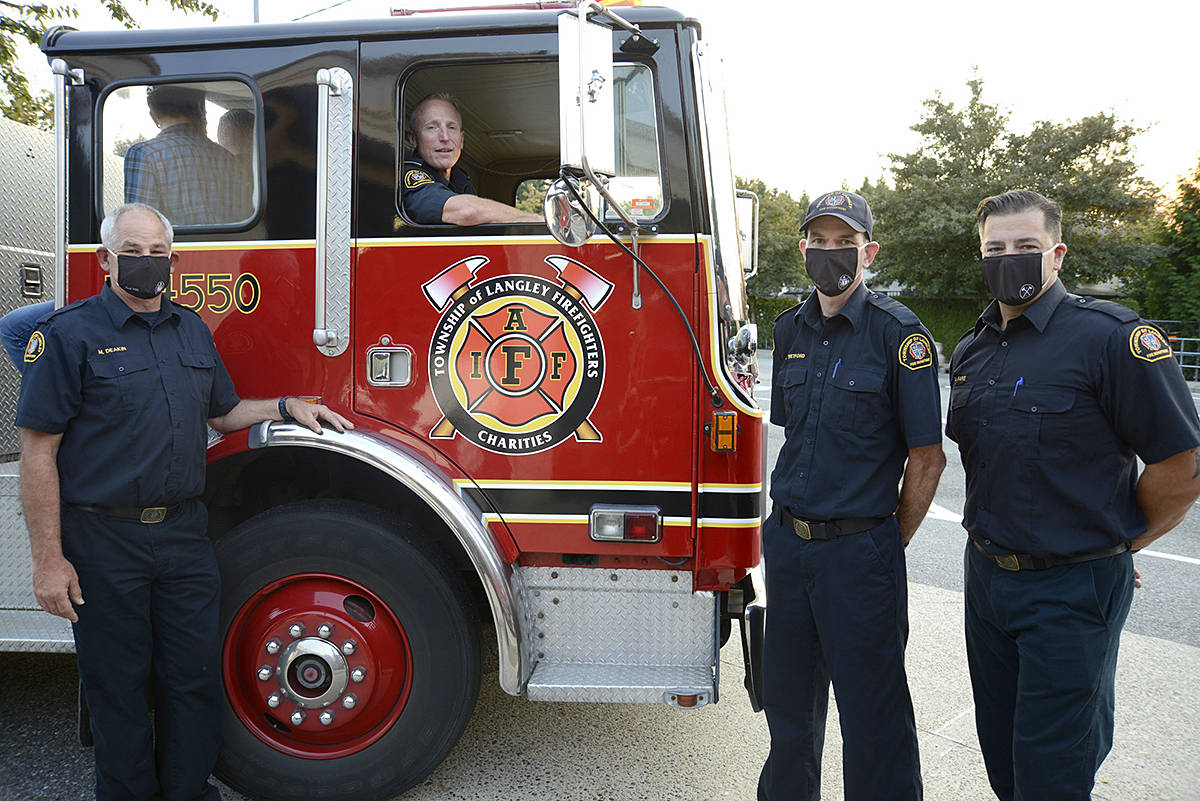 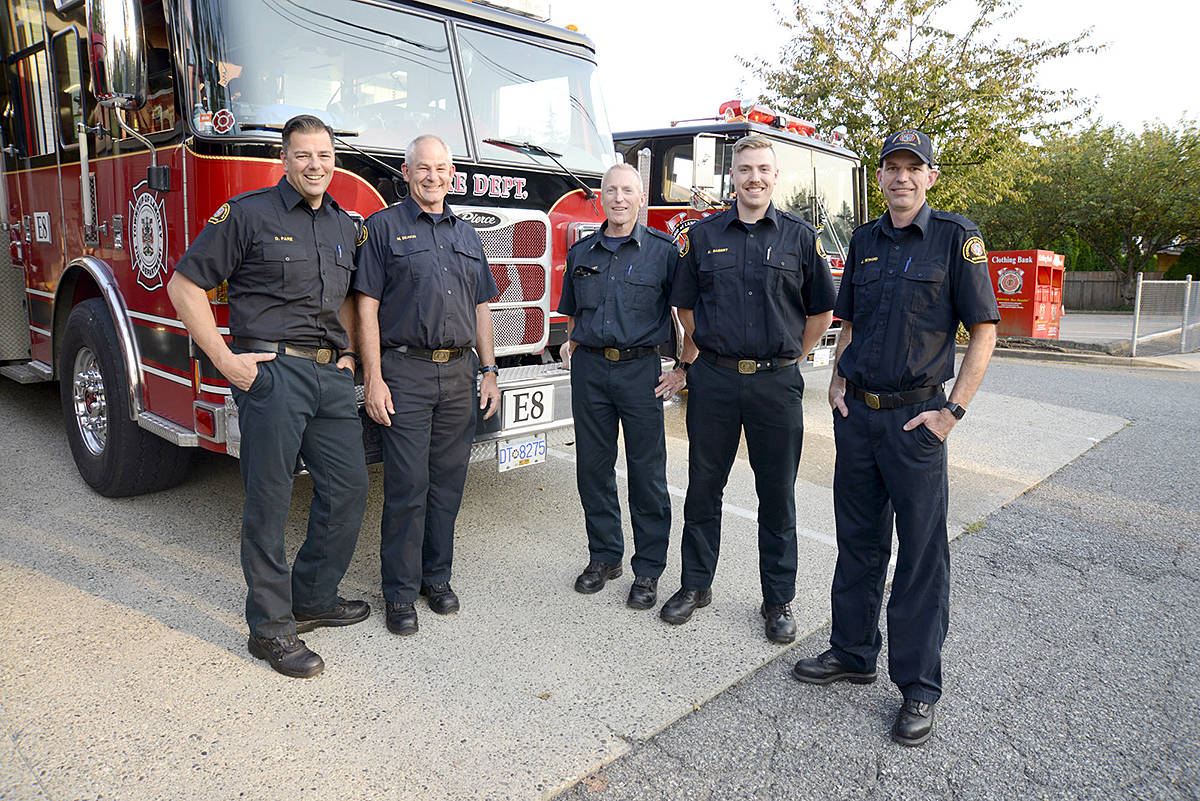 Captain Morley Sagert (centre) and the crew he spent his retirement shift on Sept. 30 with, and his son Kyle (to Morley’s left) who is a paid-call member of TLFD at firehall #2 in Fort Langley. (Jhim Burwell/Special to Langley Advance Times) 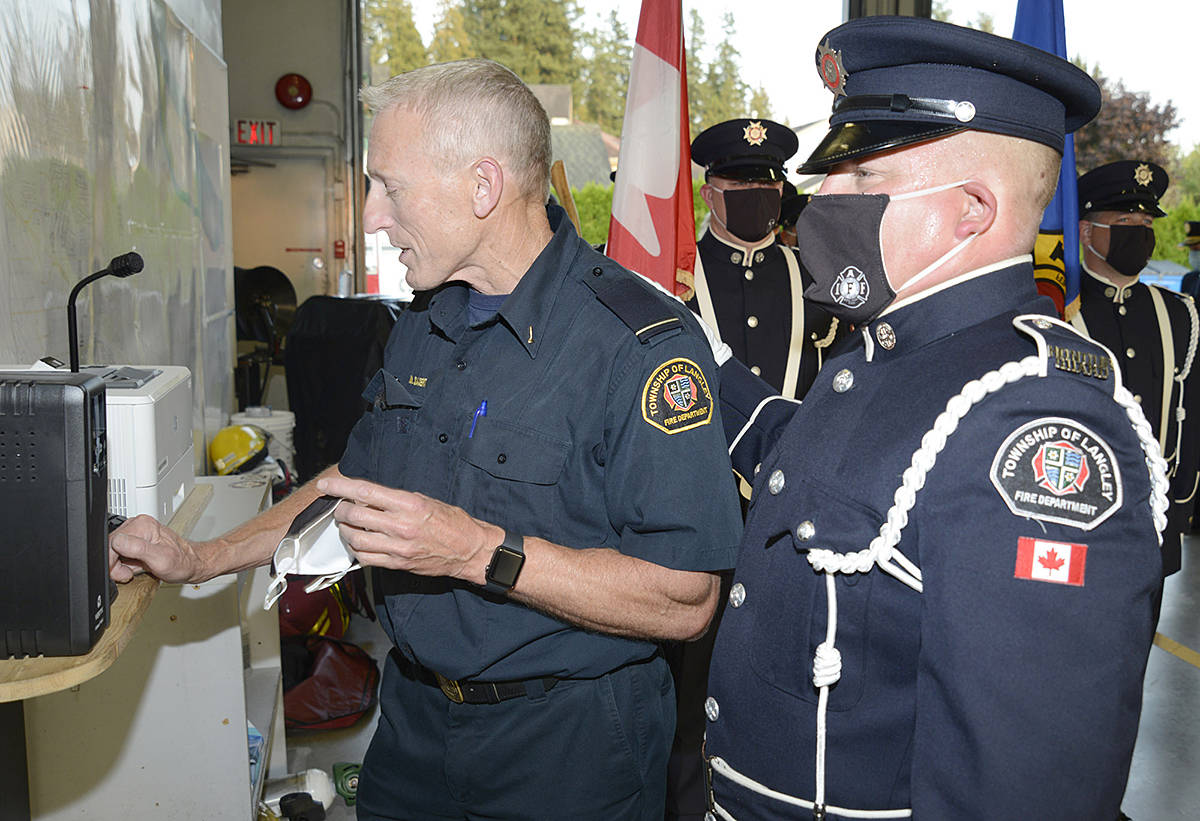