With so many seniors like her grandmother confined to care homes during the pandemic, Sonja Olsen, manager of the Brookswood Starbucks at 200th Street and 40th Avenue, thought it would be nice to have people send cards to seniors to show support over the holidays.

“The idea came about when we were discussing our holiday period planning.,” Olsen recalled.

“There was talk about adopting a senior, and my grandma actually lives in an assisted-living home in Burnaby and I just thought, ‘Well what if I just wanted to adopt my own grandma?’”

As it turned out, a lot of other people thought it was a great idea, too.

As a result, seniors at several care homes will getting a pleasant surprise this holiday season in the form of holiday messages on cards – many, many cards.

“This is so important to me because my grandma is such an inspiration to me and knowing this Christmas season there’s a chance that a) I might not see her, and b) that she has to spend an incredible amount of time alone breaks my heart,” Olsen said.

“So to me, this started as something small, thinking, how can I give back to my family? But now it’s all these other families who want to contribute too.”

On the first day, Wednesday, Nov. 25, Sonja set out 60 blank cards in the store with a sign by the front door that said “Write a holiday message to a senior and we’ll drop them off.”

“It was going to be something that was really small because I didn’t think this was going to gain this much traction,” Olsen said.

“But on the second day, I kept having to restock the cards. Then, all of a sudden, last week sometime, I got three separate phone calls. Two were from two elementary school teachers in the area who said they were in such awe of what we were doing. Now they’re going to get their students to do some artwork and also draw some handmade cards.”

There are heartfelt message in the cards that pack a whallop, Olsen discovered.

“I’ve read through so many of them and some will actually bring you to tears,” she described.

“There’s a tremendous amount of ‘You are not alone.’ And there are so many people who have left their phone numbers for seniors so they have someone to talk to. ‘If you’re lonely call me. I want to hear about your life.’”

Now store partners have decided that they also want to start collecting gifts for seniors. Starting next week (Monday, Dec. 7), the store will have a drop-off box for anyone who wants to drop off a gift for a senior.

The store has also started collecting food for the food bank.

“I’m at the point where I’m collecting so much holiday joy that I’m just trying to figure out how to spread it,” a delighted Olsen said. 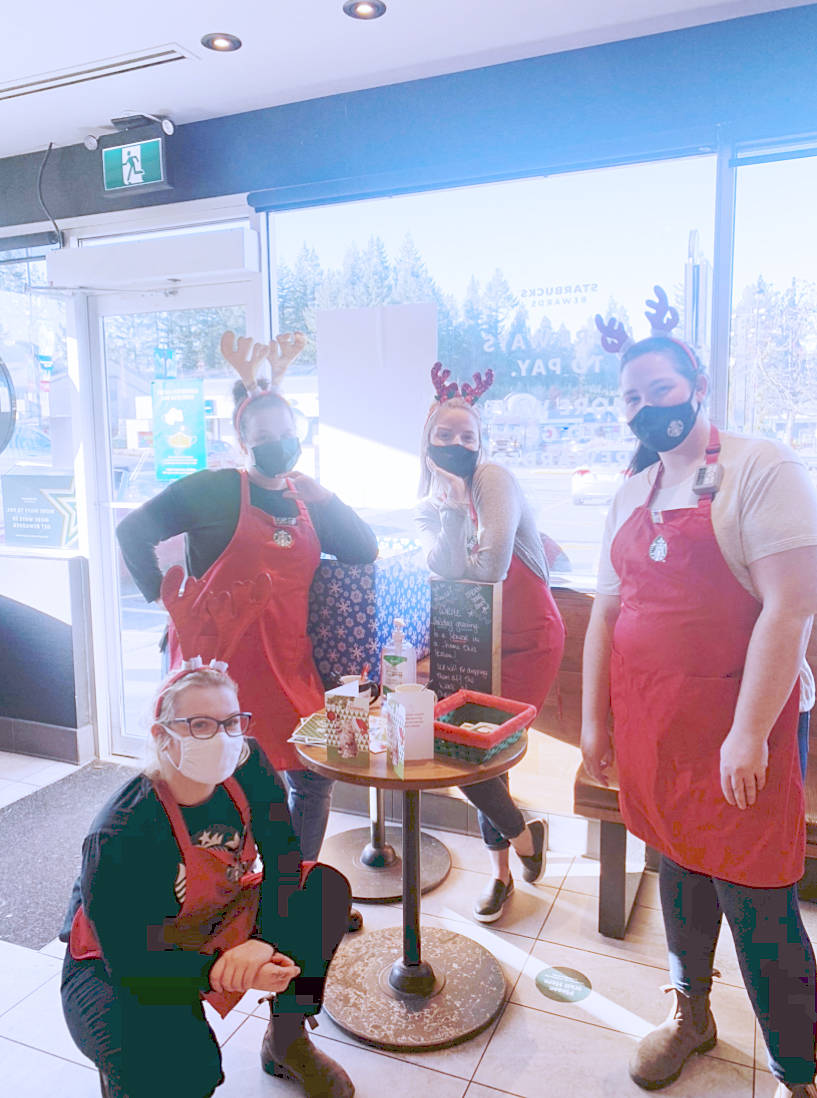 Staff at the Brookswood Starbucks at 200 Street and 40th Avenue, Samantha Robblin (kneeling) Sheryl Burk (L) Sonja Olsen (centre) and Sharla Thompson (R) posed Wednesday, Dec. 2, 2020, with the cards they were encouraging people to fill out for seniors isolated in care homes during the pandemic (Special to Langley Advance Times)