A Clayton woman says she was assaulted at this location on the Willoughby Greenway when another woman (who claimed she had COVID-19) coughed in the Clayton woman’s face. (Photo Submitted) 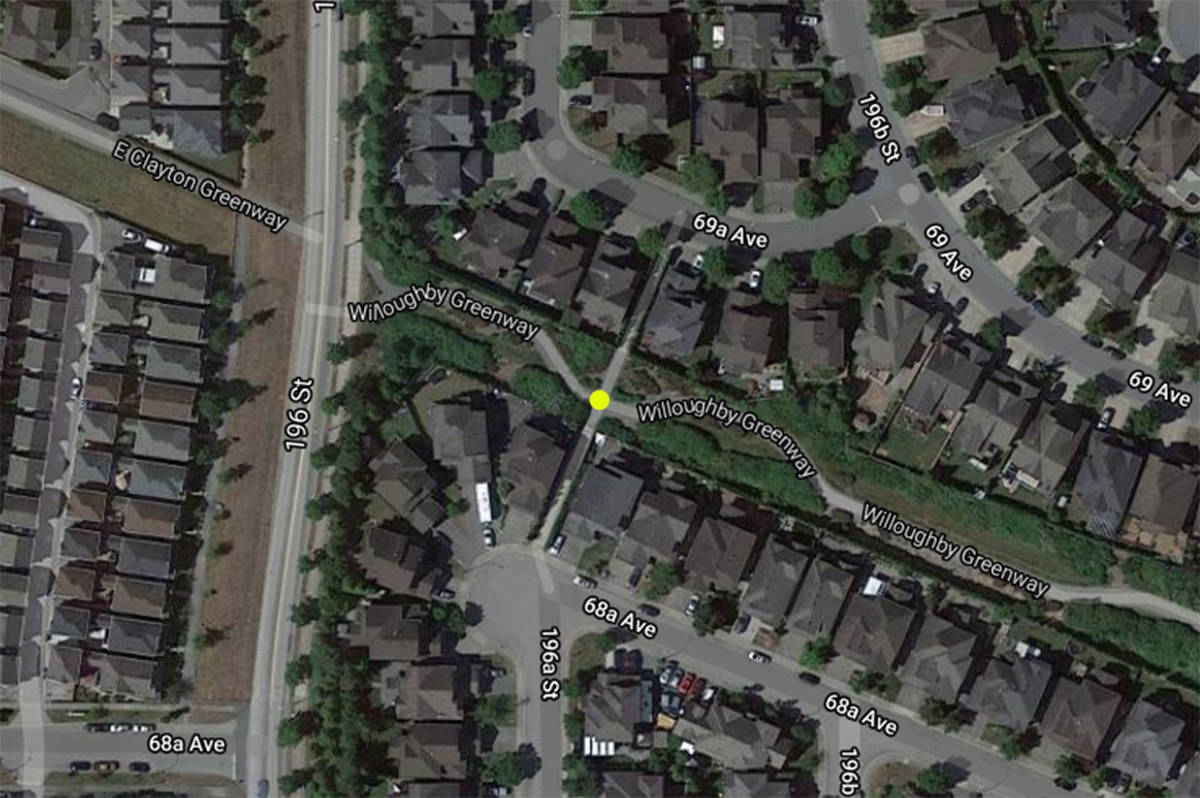 A Clayton woman says she was assaulted at this location (yellow dot) on the Willoughby Greenway when another woman, claiming she had COVID-19, coughed in her face. (Image via Google Maps)

Wadman posted a message to Facebook March 31 to warn people after a woman coughed in Wadman’s face following a verbal confrontation. That woman told Wadman she had COVID-19.

Wadman had just crossed 196 Street from the E. Clayton Greenway to the Willoughby Greenway, just north of 68A Avenue, when a woman in a black coat came up to her.

“I was just standing there for a moment,” Wadman told the Cloverdale Reporter. “And this lady walked within one foot of me.”

That’s when Wadman said she reminded the woman about the current social-distancing protocols that are in place.

“I said, ‘You realize we are supposed to be six feet apart?’” That’s when Wadman backed up and stepped into a bush to create some separation between the two.

Wadman said she repeated herself and the woman began to get irate.

“She yelled, ‘What? Do you think you and your dog are the only ones on this grass?’ Then she walked away and put her cigarette out on the cement.”

Wadman replied that she was only telling the woman this to safeguard them both.

Then Wadman turned away.

The woman — who Wadman describes as blonde and in her late 20s — then came right up to Wadman, startling her.

“She coughed right in my face,” Wadman explained. “Then she laughed and said, ‘I’ve had the coronavirus for two weeks.”

Wadman said she went numb. She stood there as the other woman walked off. Wadman said she doesn’t remember walking home that night. “I was really distraught.”

When Wadman got home, she washed all her clothes and showered. She said she lingered in the shower for a long time, crying, still “in total shock.”

Wadman was still shaking from the experience when she posted the incident on Facebook later that night.

“Please beware of this individual. She is seriously crazy!” she wrote on the Clayton Heights Community Page. “(I) never thought a person would ever do such a terrible, terrible thing.”

She said she created the Facebook post to warn others. She wants to prevent someone else from suffering the same turmoil she’s been through for the past 24 hours — and possibly for the next two weeks.

After urging from various commenters, Wadman decided to call the police, but without the woman’s name, a picture, or witnesses, the police said they don’t have much to go on.

“They said there was not much they could do without evidence. But they said they’d drive the area to try to find (the woman).”

Corporal Elenore Sturko, media relations officer for the Surrey RCMP, said the Mounties might charge someone with assault if they had COVID-19 and they coughed in someone’s face, but that every incident they deal with is always on a case-by-case basis.

“We determine if an incident meets the threshold of assault in each circumstance.”

Sturko said coughing in someone’s face, just like other forms of assault, is never black and white.

“There is no overarching answer as to whether or not a specific incident constitutes assault,” she said. “But (Wadman) did the right thing by calling the police.”

And in Hamilton, police charged a teenager after she allegedly faked a COVID-19 diagnosis. The 18-year-old woman worked at McDonald’s and was trying to get out of her shift. The restaurant was subsequently shut down for several days, deep cleaned, and the staff was sent home to self-isolate for two weeks.

Wadman would like to see the woman who did this to her charged, but she has no way of finding her. Wadman now hopes someone in the area has security camera footage of the woman walking that night with her golden retriever puppy.

If someone does have footage, she’s asking that they send her a message on Facebook.

For Wadman, the next two weeks will consist of self-isolation and reflection.

“I’m taking this seriously,” she said. “Thank goodness my daughter bought me groceries and walked my dog.”