Cloverdale’s Kwantlen Polytechnic University (KPU) Tech campus prides itself on being on the cutting edge of trades and technology.

But if you visit the farrier barn at the far end of campus, you’ll find students learning a trade that has changed little in more than 100 years.

When the Cloverdale Reporter visited the barn on Thursday (Jan. 4), Farrier Program Instructor Gerard Laverty was introducing new students to a craft that hasn’t changed since he apprenticed in his youth in Ireland.

At @KwantlenU #Cloverdale campus today, learning what it takes to be a farrier. pic.twitter.com/E6Yy0ttRom

Laverty said the motivation to become a farrier remains the same throughout the decades. Most of the students, he said, grew up with horses, and see becoming a farrier as a way to continue working with them.

In class, students study equine anatomy, physiology, disease and therapeutic farriering. In the barn, they learn what might be the most important aspects of the work: good communication, horsemanship and technical skills.

“As much as possible, we’ll shoe these horses as if they were client’s horses out in the field,” said Laverty, gesturing to the horses around the barn. “It’s real-world learning for the students.”

The farrier program has been at KPU since the college was formed in 1981. Over the decades, it has evolved into a nine-month program taken in three-month semesters. “Even then, we expect you’re going to spend two to three years in the field before you actually start your own business,” said Laverty.

Rowan Treulieb, 23, knows this. Even though she’s in her second semester of the program, she already has an apprenticeship set up with a farrier on Vancouver Island, where she grew up.

Farriers don’t have a formal apprenticeship program like electricians or welders, but Treulieb will still spend her time learning on the job, following the established farrier around and taking on small tasks before diving into her own career.

“I was looking for a career and I wanted to do something physical and work with animals and work outdoors — and be self-employed, was a big one,” Treulib said. “This kind of met all the criteria for it.”

Treulieb and Filiatrault have worked on Holy Cheroot before, as he’s been in the barn a few times over the course of the program. The horses the students work on come in from local ranchers and riders to be reshod every six weeks.

Holy Cheroot was getting both his front hooves and his hind hooves shod — the front by Filiatrault and the hind by Treulieb — requiring them to pull of his old shoes, trim his hooves, fit the new shoes and then nail them on.

“It’s great in a career,” she continued. “You never hit the end where you’re the best of the best.”

“Probably more female farriers [train here] than at all the other schools combined,” said Laverty. “Part of it has to do with the horse industry here, there are a lot of women involved with horses and a lot of women shoeing horses.”

A rise of women farriers has been one of the few aspects of the trade that has changed over the years. Laverty admitted that he is worried that more change has not come along.

“It’s one of the trades that has been effected very little by technology, and that kinda worries me a bit,” said Laverty, explaining that if there’s no gradual change, an abrupt change might be in the works.

In the future, “maybe it’ll be 3D printers,” said Laverty. “But right now we’re teaching our students exactly the same skill set that … would have been taught 100 years ago.”

In the stall beside Treulieb and Filiatrault, student Taylor James Pervan is practicing the time-worn art.

Kneeling beside the horse and holding up her hind foot, Pervan presses a glowing shoe to the hoof. Smoke billows away from it, spreading the acrid scent of burnt hair and hot metal through the barn.

Removing the still-hot shoe, he checks the blackened image seared onto the hoof, making sure the shoe is the right fit.

It is. After cooling the shoe in a barrel of water, Pervan returns to nail the shoe onto her hoof. He watches as she gingerly holds her foot in the air, then places it on the rubber mat covering the ground.

For Pervan, who worked as a welder before joining the KPU program, the art is a perfect match between his love of steel and his appreciation for horses, which he discovered when working as a “cowboy” on a 16,000 acre ranch in Clinton.

“You need to figure out a way to communicate with them,” Pervan said about working with horses, echoing one of Laverty’s key teachings.

“It’s just learning to communicate with them,” he continued, “learning how to work with them, but not desensitize them.” 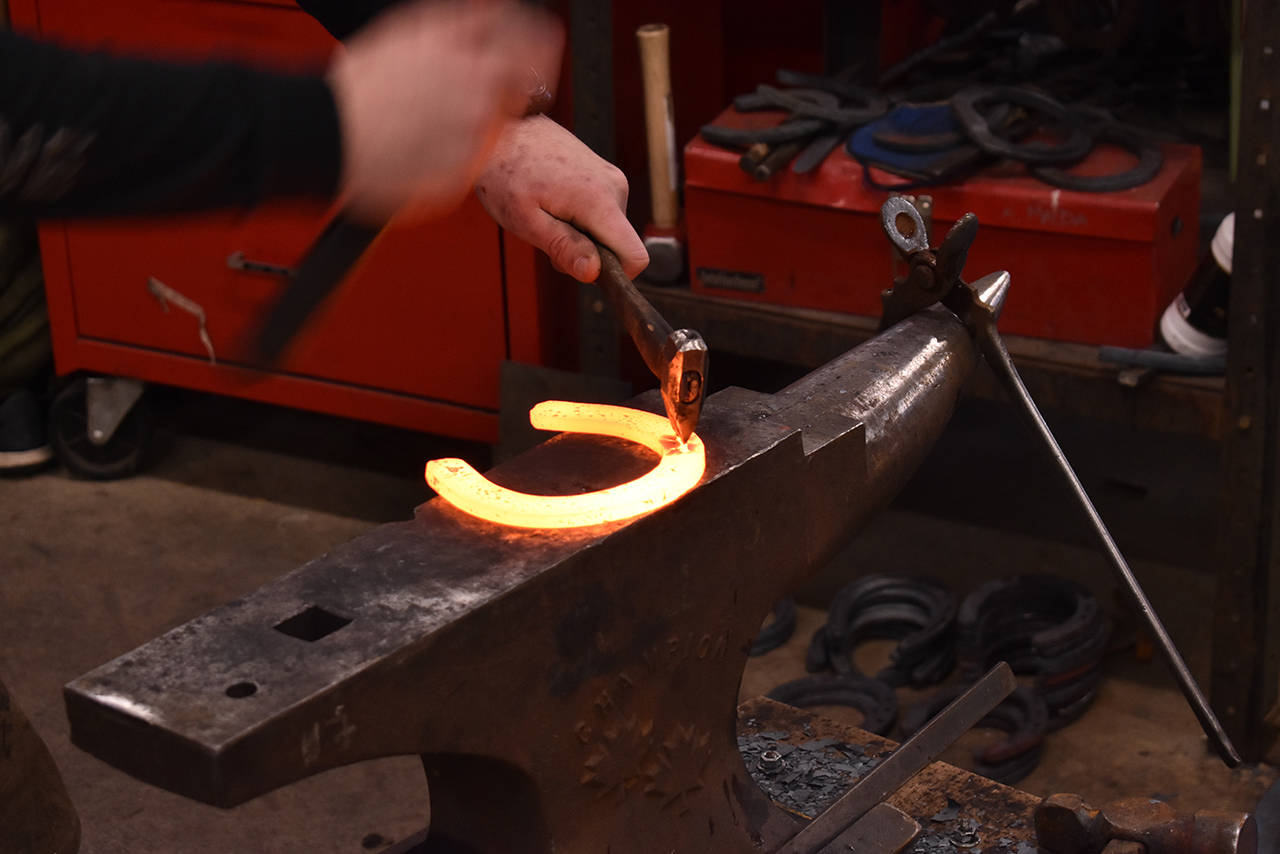 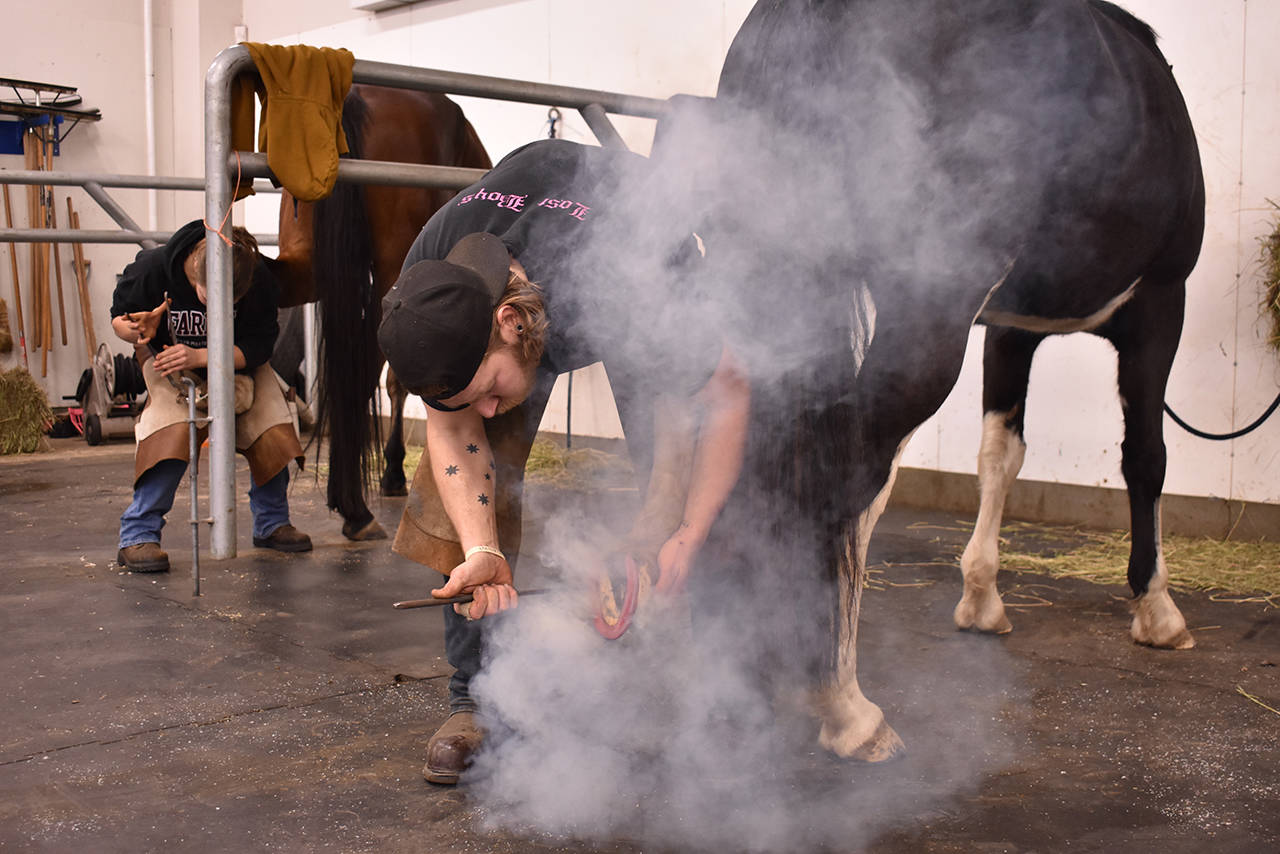 Farrier student TJ Pervan presses a hot shoe to the hoof of the horse he is working on. This will create a burned mark, so he can see if the shoe will fit properly. (Grace Kennedy photo) 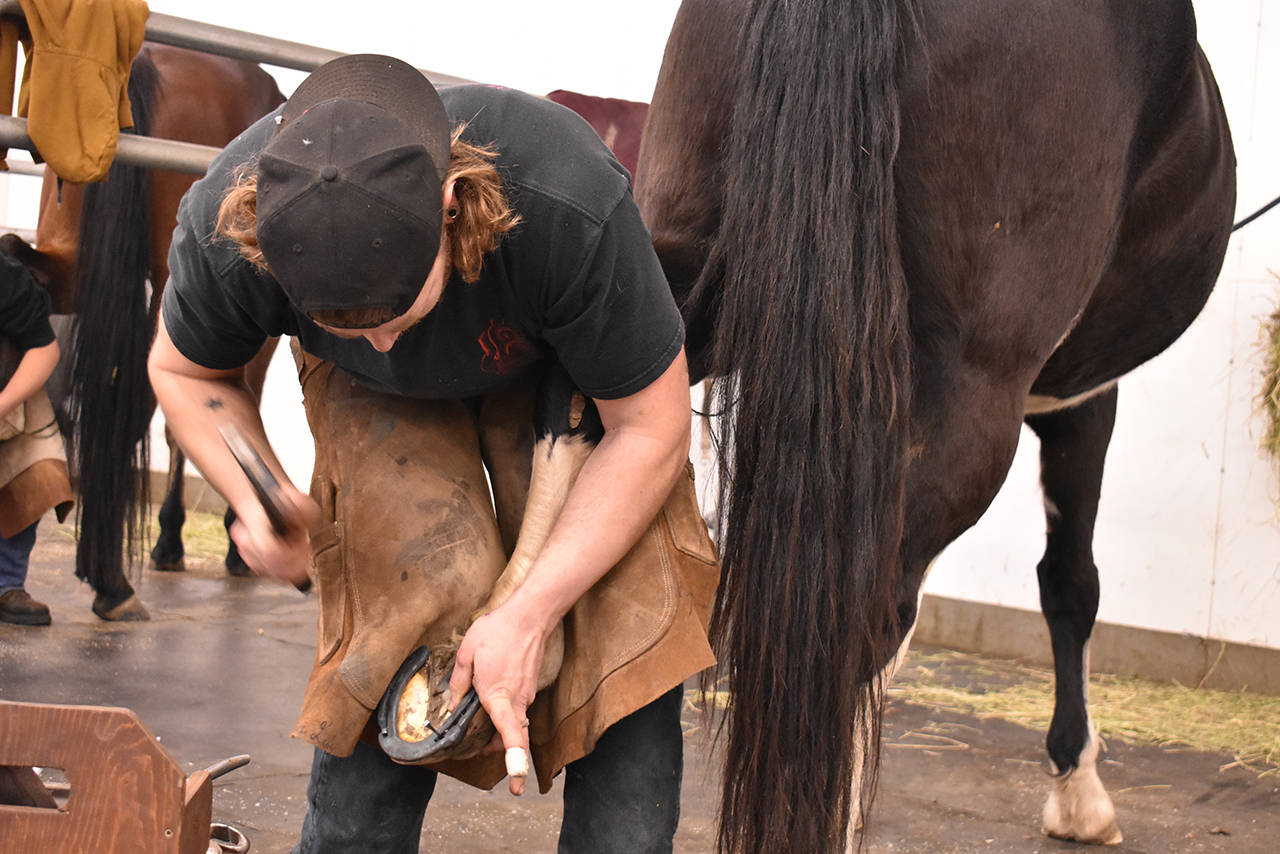 Farrier student TJ Pervan nails a shoe onto the horse’s hoof. Pervan actually reused a shoe that was already on the horse, as it had minimal wear in the six weeks since the horse was last shod. (Grace Kennedy photo) 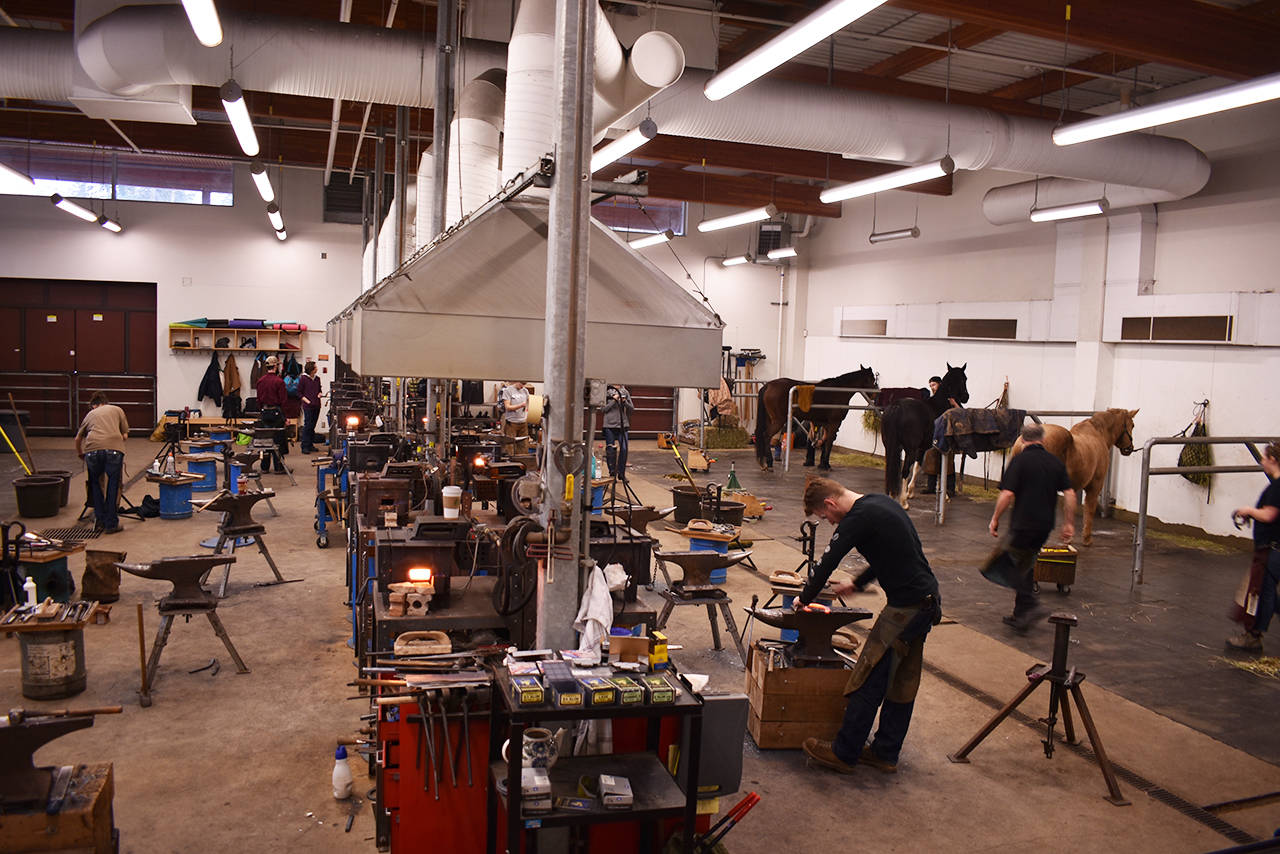 An ongoing struggle with poverty

VIDEO: A tale of two kitties