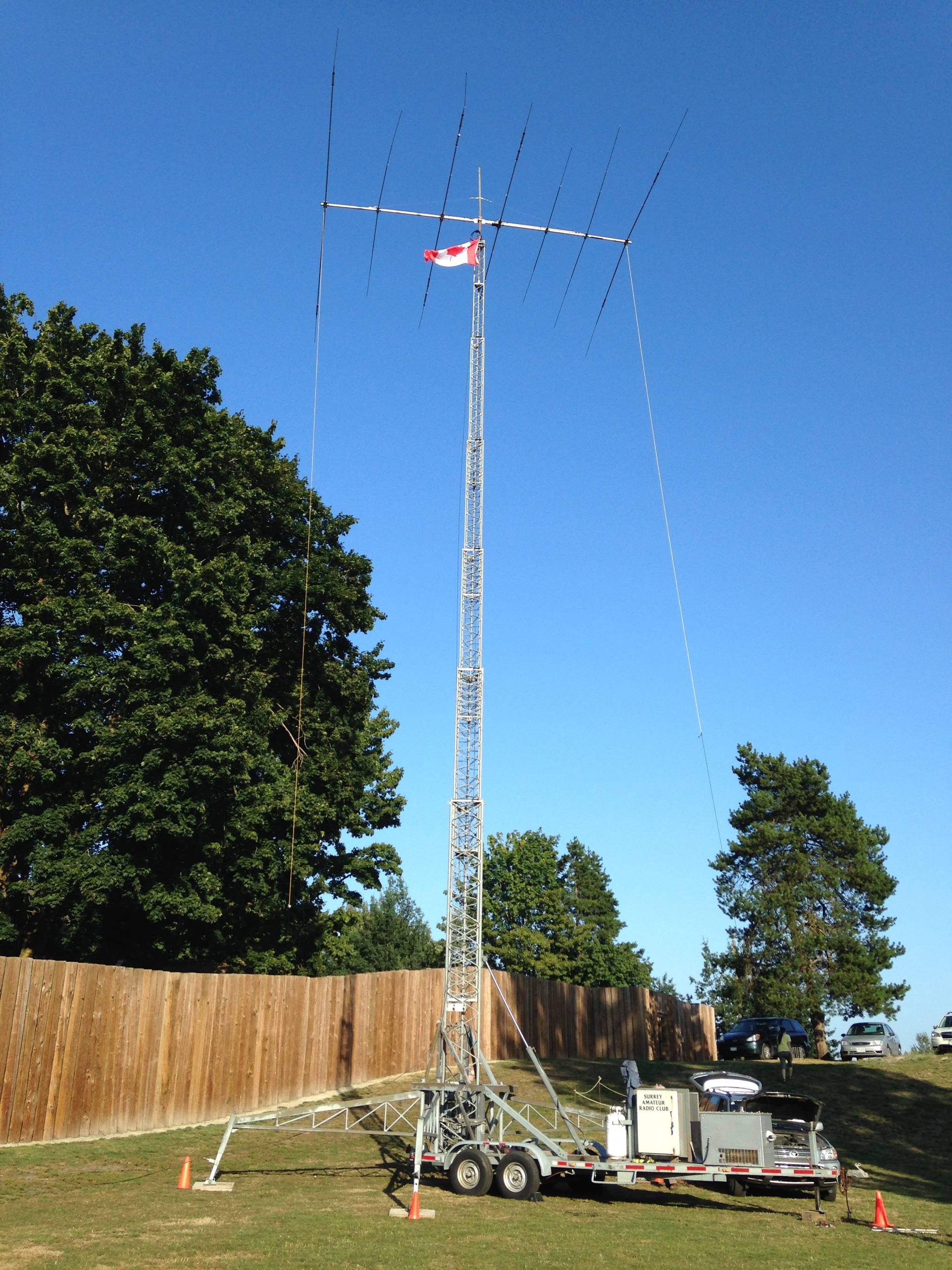 A broadcast tower sitting in the orchard of the Fort Langley National Historic Site (FLNHS) helped make history earlier this summer – for the very first time, amateur radio sent out a call from the Parks Canada location.

For the entire 2019 year, amateur radio groups have been invited to set up in parks all across the country to send broadcasts around the world and make contact with other operators.

The initiative, Canadian National Parks On the Air, is the brainchild of a small group of Ham radio operators from Halifax that wanted to help spread the country’s beauty and get people connecting.

With the support of Radio Amateurs of Canada (RAC) and Parks Canada, the communications experiment launched in January of this year.

Surrey Amateur Radio Communications (SARC) supplied the broadcast tower currently set up at FLNHS. Operators made their first official broadcasts at the site on July 12 and 13, broadcasting at 100 watts.

Marcy Lui, a member of the Coquitlam club and Surrey Emergency Program’s amateur radio, said people can stop by again to witness the broadcast and learn what amateur radio is all about.

“It’s all federally regulated – we have received no payment and everyone is a volunteer who passed a written exam and has been assigned their own unique call sign,” Lui said.

There are currently 50,000 registered amateur radio club members and operators in Canada. For the Parks Canada initiative, volunteers put out the call so “chasers” all across the globe can receive and respond.

“Chasers,” those who respond to Lui, or any other operator’s broadcast, are awarded a point for each contact they make. A friendly competition is underway throughout the year, which is all being logged and tracked on www.cnpota.ca.

So far, Lui said they have received responses from operators as far as South America, making for an exciting renascence classical connections in a time where communications are typically made within the blink of an eye.

“Amateur radio is changing – analog is moving more into digital. It is exciting to people to reach satellites and bounce signals off the moon,” Lui explained.

As part of the emergency response program, Lui said she and a team of volunteers readies broadcasts in-case of severe emergencies like a massive earthquake. If the internet and cell phone signals go down, Liu says amateur radio will be there to put out a call.

For now, these Canada-wide experiments are taking place intermittently throughout the rest of the year. People can visit FLNHS on Saturday, Aug. 10 and Wednesday, Aug. 15 to see the operators go live.

“They’ll be two people on site,” Liu explained. “One operating the radio and the other to answer questions and show of everything works.”

Amateur radio will be broadcasting from 10 a.m. to 3 p.m. on both days.

Lui’s personalized call sign, by the way, is Victor-Echo-7-Juliet-Tango. She said that will be her assigned Canadian amateur radio name for the rest of her life.

ONE DAY AT A TIME: Recovering homeless addict shares paintings and more

COMMITTED: to family, kindness, and each other