Organizers are predicting thousands will attend the first in-person Remembrance Day at the Fort Langley cenotaph since the COVID pandemic.

“There’s nothing better than being there and seeing 6,000 people show up,” Schildhorn told the Langley Advance Times.

It happened in 2019, when a Remembrance Day record of 6,500 was set – up significantly from the previous year, when attendance was estimated at 5,000.

Numbers dropped in 2020 and 2021, when the services were livestreamed, and attendance was restricted.

It represented a rolling back of a steady growth trend for the annual Fort Langley event that began with its revival more than 20 years ago.

On Nov. 11, 1999, Second World War veteran Gord Gillard walked into the Fort Gallery – at that time located across the street from the cemetery. He was upset that there was nothing happening at one of the community’s first cenotaphs, which stood next to a veterans’ section in the village cemetery.

He spoke with Brenda Alberts, who joined him for an impromptu service of two at 11 a.m. that day.

Alberts promised Gillard there would be a proper service the following year — and there was (Alberts and Gillard have since passed away). 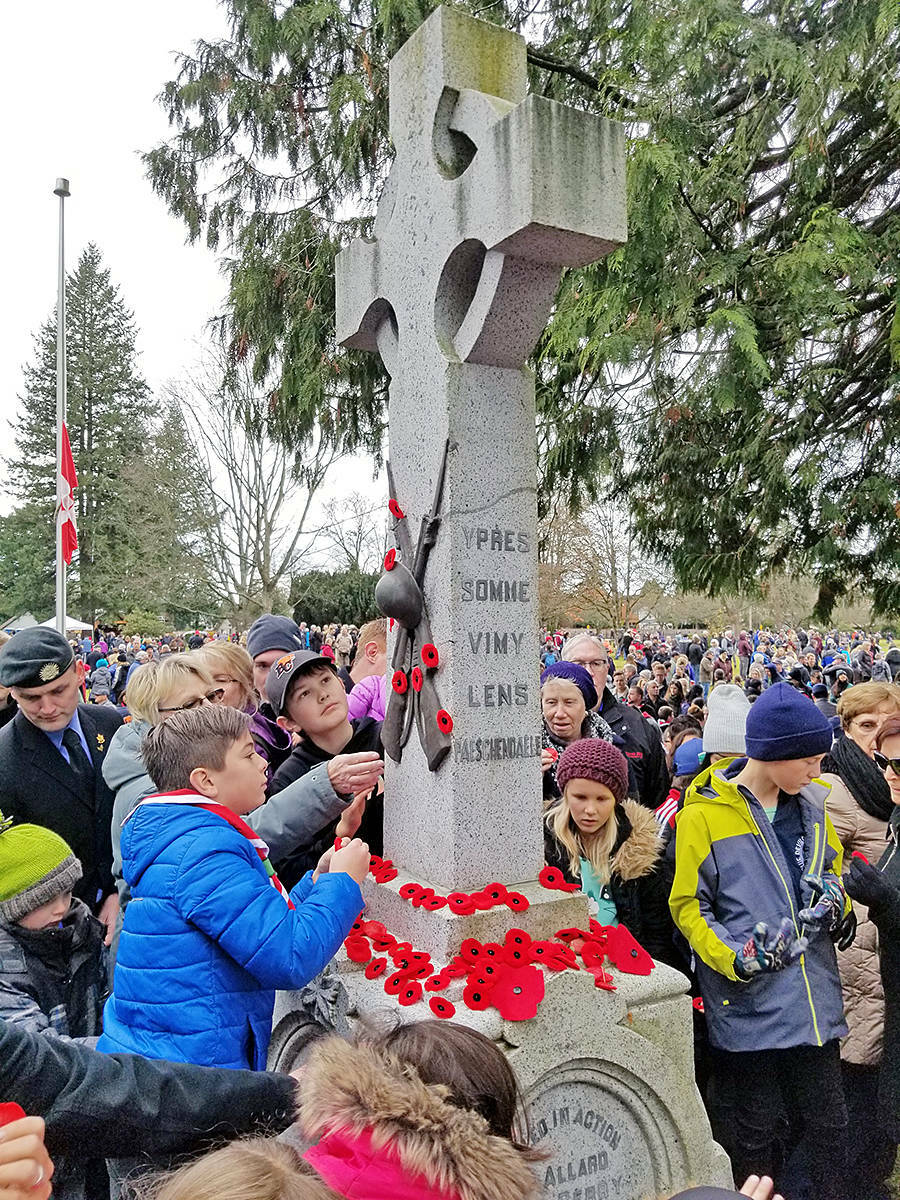 Organizers expect a big turnout, on the order of the record-setting 2019 Remembrance Day at the Fort Langley cemetery, now that CIVID restrictions have been lifted. (Langley Advance Times file)

It will be led by a piper and a colour party, followed by veterans, active members of the armed forces, members of the clergy, RCMP, Armed Forces cadets, firefighters, elected officials, Kwantlen elders, and members of the scouting and guiding movements.

They will make their way toward the cenotaph, following the gravel and grassed roadways in the cemetery’s boundaries, passing by the graves of close to 300 veterans buried in the cemetery. People already assembled near the cenotaph will be able to view the procession as it approaches the site.

“It’s a complete return, I would say [to pre-COVID times].” Schildhorn told the Langley Advance Times.

Proceedings will be broadcast on www.FortLangleyRemembers.com and on https://www.facebook.com/fortlangleyremembrance/ starting at 10:15 a.m., Nov. 11.

“There’s always [going to be] a livestreaming component,” he predicted.

Reserved parking is available for veterans, the elderly, and those with disabilities at St. Andrew’s Church, next to the cemetery at 9025 Glover Rd..

In preparation for this year’s Remembrance Day service, organizers have made a public appeal for photos, short videos, and stories from veterans and their families.

Send them to info@fortlangleyremembers.com with subject line: “Remembrance Day 2023.”