Walnut Grove grade 12 student, Kevin Kim, has been given the amazing opportunity to photograph and film the PyeongChang 2018 Olympics! Be sure to wish him well on this awesome adventure. https://t.co/6vDqxELLDi #Proud35 #Think35 pic.twitter.com/OMJ4w6Xhen

Kevin Kim is skipping class at Walnut Grove Secondary, and his school district couldn’t be prouder.

The Grade 12 student flew out Feb. 15 for the Olympics in PyeongChang, South Korea.

His all-expense paid trip is actually a gig. He’s creating a multimedia presentation on behalf of an international firm that is a Games sponsor.

Kim was born in Korea and has lived in Canada since he was seven years old, first in PEI. The family has lived in Langley since Kevin was 10.

The unique gig allows Kevin to put his passion for film to work.

“Film is something I got into around Grade 9. I fell in love with it. I loved watching movies and being able to make them myself felt amazing. I like to daydream and film has allowed me to visualize them and show it to my family and friends. Photography is something I picked up recently because I enjoy using the camera in general, and it’s been another fun unique experience. I like film/photography over other art forms because I like to actually get up and move around.”

Kevin will be sending dispatches from the Games to the Langley Advance to give people here a glimpse of the Games through a young person’s eyes.

“The video is just something I thought was neat. The surroundings is one of the biggest tourist attractions in Korea and is also very near where the president of South Korea resides,” he explained about his video clip.

Kevin is following in the footsteps of his father, Jung Woo Kim who travels Asia creating advertising for the same global firm that asked Kevin to do this project.

“I was inspired by my dad,” Kevin said.

Kevin, who has a sideline doing wedding videos, is in Korea for about 12 days. The family was able to extend his stay and purchased a fare so his mom, Kyung Ok Lee, could travel with him. They are also able to fit in visits with family while in Korea.

“I’m looking forward to being at the Olympics of course, I’ve never actually been at one before, but I’m also excited to see my family again and experience the culture that I’ve missed out on for the past four years,” he said.

His days are booked up with travel and video work but first he must overcome the inevitable curse that strikes most long distance travellers – jet lag – after a 13-hour flight to get to Korea. 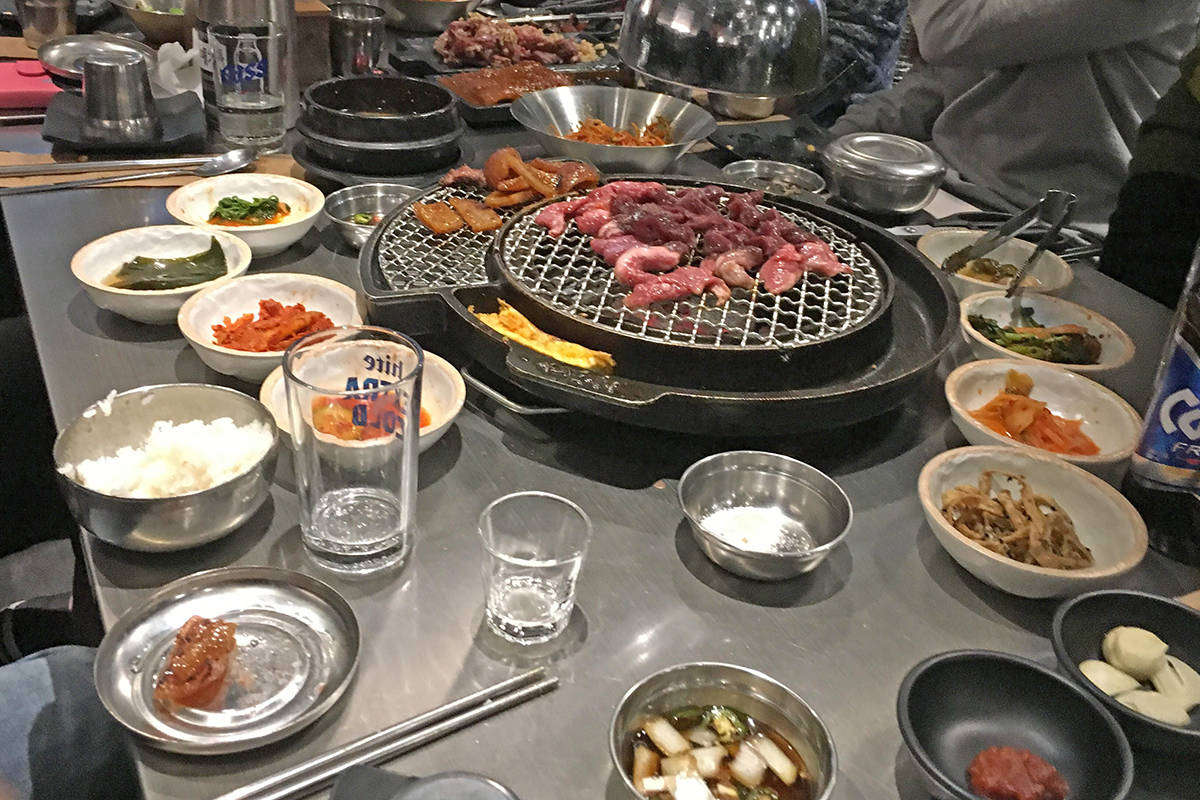 Kevin Kim was able to enjoy a barbecue meal with family soon after arriving in Korea. (Kevin Kim photo)