When Back To The Future recently made a return to movie theatres, Willoughby resident Felipe Baird took his sons Andre, 7, and Christian, 4, to share one of his favourite films.

They had a blast.

So when Baird heard it would be possible to have a picture taken with an exact copy of the car from the movie, it didn’t require much explaining.

On Sunday, June 21, Baird, his sons, and wife Martha, posed for a Father’s Day portrait with a duplicate of the movie’s iconic DeLorean, outside the Toy Traders store at 19880 Langley Bypass.

“I’m a big fan of the film,” Baird told the Langley Advance Times.

When asked what he thought of the film, Andre made a show of thinking it over carefully, then smiled.

Dozens waited in line for a chance to have their pictures taken.

No one was allowed to sit inside the car, which boasted an interior that matched the inside of the original, right down to a time travel date display, set to June 21.

Toy Traders owner owner Matthew Purdy explained the Father’s Day event had both the time-travelling DeLorean as well as the “dream truck” belonging to Marty McFly, the character played by B.C. actor Michael J. Fox in the movie trilogy.

Purdy said the line-up was marked off to maintain social distancing, with a maximum of 16 families at any given time.

“Any more than that, they waited in their cars,” Purdy said.

Both vehicles were provided courtesy of Chilliwack-based British Columbia Delorean, a company that offers rentals of “screen-accurate” versions of well-known rides like the car and truck from Back To The Future, as well as the SUVs from Jurassic Park and the Pontiac Trans Am from the “Smokey and the Bandit” films.

Brandon Mindel from the company chatted with visitors, dressed as Marty McFly.

To build an exact copy of the time-travelling stainless steel car,” first you’ve got to find a Delorean,” Mindel explained.

Only about 6,000 are known to exist, he estimated.

Then, you have to find someone who knows how to convert it.

“We actually had ours built by a professional down in Florida,” Mindel said.

“He’s a former NASA engineer and he did part-time work at Universal Studios.”

READ MORE: VIDEO: Why Baby Yoda was never making it home for Christmas

Turnout was estimated at close to 800 people for the event, which ran all afternoon. 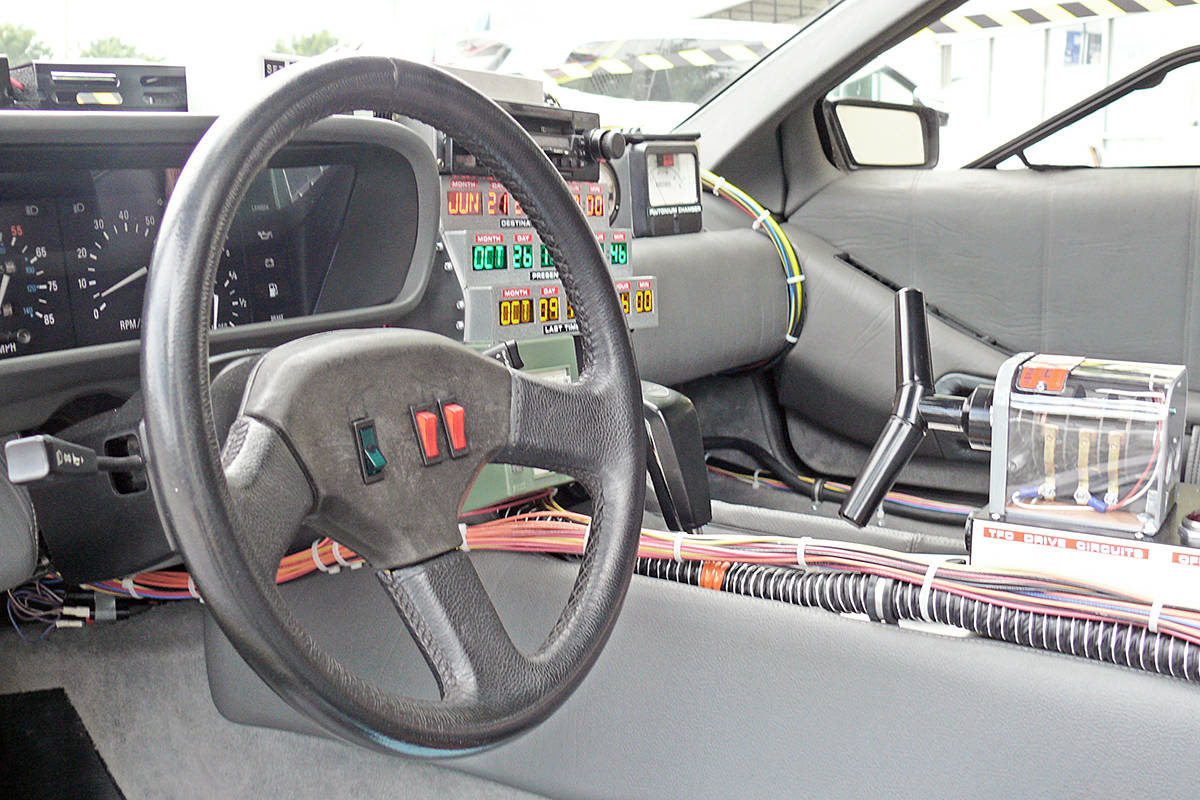 For Father’s Day, Sunday, June 21, 2020, Dads could have their pics taken with the iconic DeLorean time travelling car from the Back To the Future movies outside the Toy Traders store on the Langley Bypass. Inside the DeLorean was the same array of switches and wiring seen in the original. (Dan Ferguson/Langley Advance Times)