After beating stage 4 ovarian cancer for the second time in two-and-a-half-years, Annabel Fisher made a pivotal decision.

If the cancer came back, she would not pursue treatment.

Instead, she would spend what time she had left on Earth doing the things she loves with the people who mean the most to her.

The Fort Langley resident made that resolution this past January, when doctors declared her NED (no evidence of disease) after she went through six gruelling months of chemotherapy and other treatments.

In May, she and her husband, Michael Saunders, decided to cross off bucket-list item number 1, and booked a flight to the UK to take a trip down memory lane and visit the village where Fisher grew up.

In June, just before leaving for the vacation, she found out the cancer had once again returned.

“I made the commitment that if the cancer recurred, I would not pursue chemo because it wasn’t worth living in that way,” Fisher said in a video blog posted on YouTube on Aug. 20.

“… When I was in the UK, it became really clear to me that although all of the treatments that I had had given me extra life, what had been happening over the last three years was that I had been trying not to die. And I appreciate that that was unconscious, but rather than embracing the life I did have left, I was trying not to die.”

Fisher, who is just 47 years old, has been documenting her cancer journey on Facebook since she was first diagnosed in August of 2015. At that time, the disease had spread to 10 of her organs, and she was told it was unlikely she would survive.

She was surprised by the outpouring of love and support she received from her social media community, so she continued to share her stories of triumph and loss over the next two years.

Now, with likely only weeks left to live, Fisher wants to leave behind an online legacy of inspiring videos for people to watch after she’s gone.

By showcasing what she’s doing with her last few days — such as travelling to Nepal, where she met her husband 25 years ago — she hopes that others will be reminded to make the most out of their own lives.

“I’d like to demonstrate what grabbing life with both hands means, and making your one life count, everyday,” Fisher said.

“I would like to share as much as I can for what I have left in my life. And thank you, I’m just filled with gratitude that this is how I live my life now, making my one life count, in gratitude.”

Fisher’s last wish is to spend her final days with her parents, husband, oldest friends, and beloved cat, Midnight, in her hometown in the UK.

Thanks to supporters in Langley, that dream is coming true.

Her friends have created a GoFundMe page to raise $5,000 to cover the costs of transporting Midnight from her home in Fort Langley to Fisher’s parent’s home in Cornwall.

The eight-year-old feline requires a specially made crate, a pet passport, shots, special chip, and pages of documentation, all of which will cost the family about $3,000. The remainder of the funds raised will cover any unexpected costs that may arise, such as vet bills.

Midnight will be picked up in Fort Langley on Monday, Sept. 10 and transported to Vancouver International Airport for the night. The next day, she will fly to Heathrow Airport in London, and will then be transported to Cornwall. Fisher and Saunders leave Vancouver on Sept. 13.

“Annabel’s days are limited and finances should be the farthest thought in her mind,” wrote her friend Rachel O-Rourke, who launched the GoFundMe campaign.

“I hope that even if you haven’t been blessed to know this amazing woman, you can be moved by her story. We can all learn from her journey and her desire to grab life with both hands. We can learn from her heart: her last request that we make our one life count, every damn day.”

Organizer Sofia Reis plans to install a giant banner outside the home that reads, “Grab life with both hands.”

“Annabel is very inspiring,” Reis said. “She’s a happy person, she’s very generous. I feel like she’s been giving a lot to her community.”

“I know that (Fisher’s family) has had a rough few years trying to fight this disease, and it’s tapped them out completely, and that’s why I want to do everything I can to try to help her get home,” added Deb Amia, another close friend.

“She’s dying and she’s thinking about how can she help other people, and that just tells you — that’s the Annabel I know.”

For more information on the fundraiser, visit www.gofundme.com/live-like-Annabel.

Fisher’s videos can be viewed on her YouTube page “Annabel Fisher.” 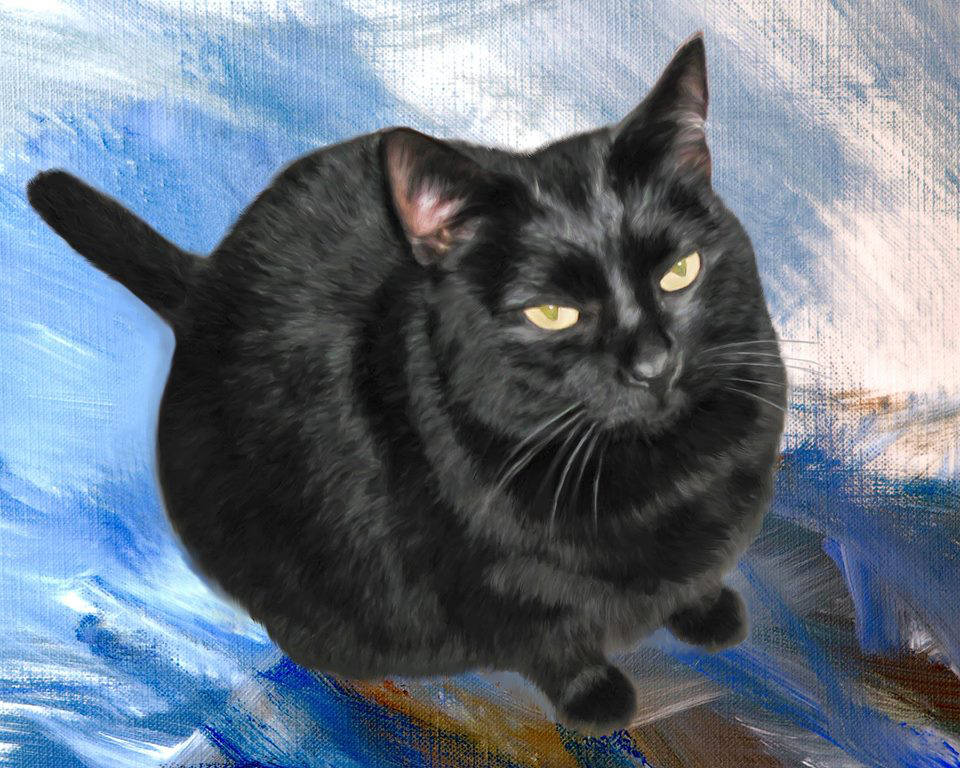 Annabel Fisher’s friends want to raise $5,000 to help transport Midnight, Fisher’s beloved cat, to the UK to be with her in her final days. Fisher has been given just a few weeks to live as she battles ovarian cancer for the third time in three years. Facebook photo

Annabel Fisher is hoping her story of cancer will inspire other to “grab life with both hands.” Facebook photo