The number of cancer patients transported by the Volunteer Cancer Drivers Society (VCDS) in the Lower Mainland has increased substantially, going from an average of 300 trips a month in 2016 to more than 500 last year.

Figures released by the VCDS following their Annual General Meeting (AGM) in March show that the volunteer drivers made a total of 6,300 trips to and from medical appointments last year, 1,100 of which were from the Langley/Abbotsford area.

The VCDS was created as an emergency replacement by former CKNW reporter George Garrett, Garth Pinton and the late John MacInnes after the Canadian Cancer Society (CCS) cancelled its Volunteer Driver Program 2015 as a cost-saving measure after almost a quarter-century.

When the CCS cancelled its volunteer drivers program, its press release said the decision was based on “factors such as similar government-funded driving programs, decreasing volunteers and ridership as well as increasing operating costs.”

Since its inception, the VCDS has grown to 148 drivers and seven dispatchers who provide service to Langley, Abbotsford, Surrey, White Rock, Maple Ridge, Port Coquitlam, Coquitlam, Port Moody, the North Shore, Delta and part of New Westminster (Service to other communities in the Lower Mainland is offered by the Freemason’s Cancer Car Program).

One of the drivers, Abbotsford resident Pauline Buck, who also serves as the organization’s volunteer Director of Communications, was elected to the VCDS 10-person Board of Directors for a 2-year term at the AGM.

“I’m glad that I can help provide cancer patients with some peace of mind by solving their transportation needs in this way,” Buck said.

“Modern medications and therapies are helping ensure a positive prognosis for many cancer patients, but their hope for a cure or period of remission often depends on their ability to actually get to the cancer treatments their oncologists have prescribed … for many, family and friends are not able to help.”

READ MORE: Appeal for cancer patient drivers gets rapid response in the Langleys

The VCDS is a registered charity, with funding coming from a variety of municipal and charitable sources.

Dispatchers work from home, and volunteers drive one to three times a week. Patients call the number, leave information with their address and time of appointment, and they get a call back within 24 hours with info on the driver.

Drivers are reimbursed 41 cents per kilometre. Some choose to donate a portion back.

Drivers must provide proof of insurance, a reference, their ICBC driving record, and pass a criminal record check.

To schedule a ride, once a patient has received their referral and knows the dates and times of upcoming appointments, they, a family member or a caregiver can call the dispatch office at 604-515-5400.

The caller will be greeted by an automated attendant and asked for their name, address, phone number and the date and location of their appointment.

They will be contacted via phone by their designated volunteer driver to introduce him/herself, confirm they appointment, and arrange a pickup time.

It’s a round-trip, the driver will wait at the appointment location and return the patient home immediately afterward.

The society offers free transportation to patients throughout diagnosis, treatment and follow-up care. A caregiver may accompany a patient and most drivers can accommodate walkers and wheelchairs.

For more information about VCDS, to volunteer, or to donate, visit www.volunteercancerdrivers.ca. 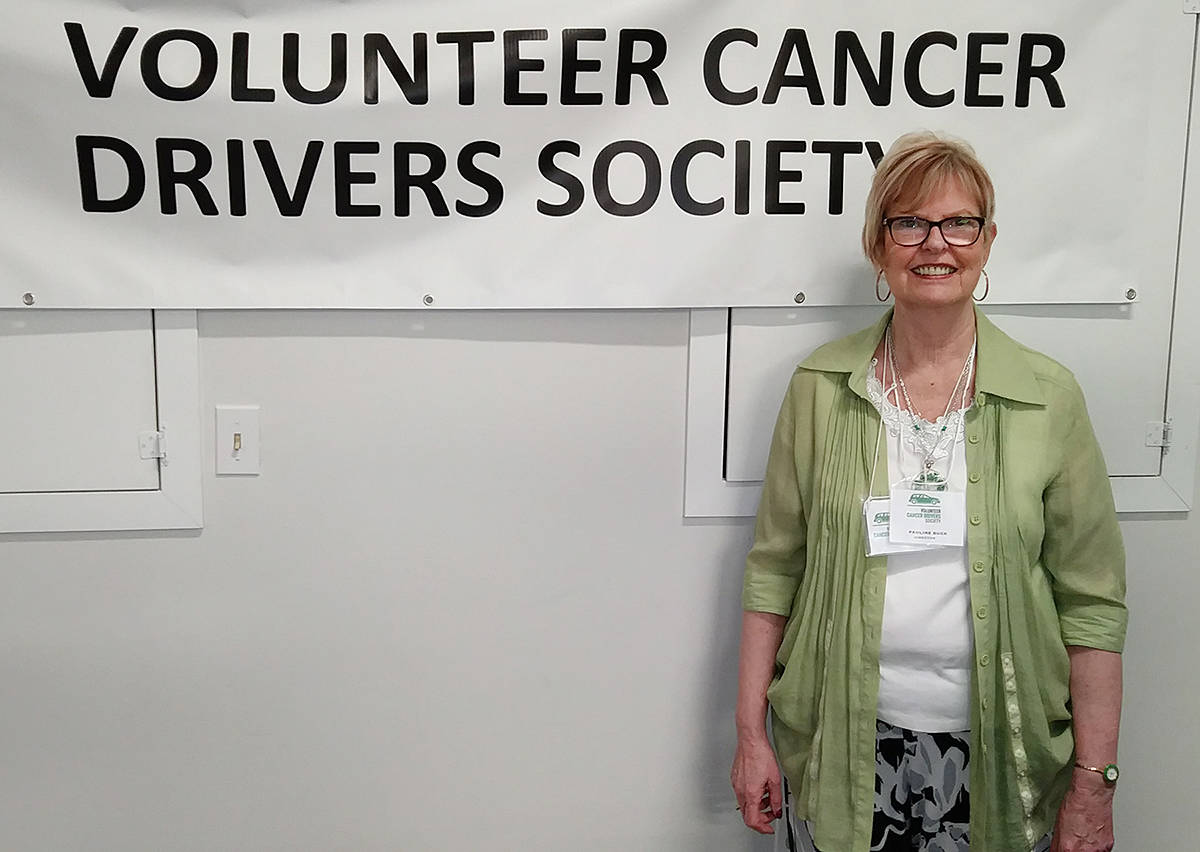 Pauline Buck has been appointed to the Volunteer Cancer Drivers Society board of directors. Supplied photo

VIDEO: Langley toddlers collect what the Easter bunny left behind