The Langley man who looked after the “Charlie’s Tree” veterans monument will get his own memorial.

It will be a bench in Langley’s Alex Hope park, where the late Dave Manson used to take his dog for walks.

The project was announced at a Saturday (Sept. 22) memorial service for Manson, who passed away in July.

Manson had told his family and friends that he didn’t want a memorial service, but they decided to go ahead anyway, said Barry Drews, a member of the 3rd Canadian Army Veterans (CAV) ROME unit, who worked with Manson on another veterans memorial, the Highway of Heroes.

“He was a very selfless man,” Drews said. (He was) “kind of the guy in the background, who wasn’t looking for kudos.”

Drews said Manson would shovel snow from a neighbour’s driveway without being asked.

“If he saw something needed to be done, he did it,” Drews said.

For more than 10 years, Manson looked after Charlie’s tree, the roadside memorial to Canada’s fallen soldiers on Highway 1 just west of 192 Avenue near the Langley-Surrey border.

Manson said he started driving from his Langley home to the site every two to three weeks to look after the tree because he got tired of seeing how neglected and overgrown the memorial had become.

Much of the tree was obstructed by overgrown bushes.

After getting permission from a local Royal Canadian Legion branch, Manson attacked the bushes with a “chopper” and went after the crab grass with a weed-eater.

Once the site was cleared, he estimated he spent about two hours on maintenance every visit, cutting grass, chopping down encroaching bushes, looking after the flags that fly on the site and other tasks.

Shortly before he passed away, Manson turned over responsibility for the site, along with all his tools, to a group of Air Force cadets.

Manson was also involved in other community projects to honour Canadian war veterans, providing hundreds of flags to line the walkways when a formal Remembrance Day service was held at the almost forgotten Murrayville cenotaph in Langley in 2017.

When a piper couldn’t be found to accompany the honour guard, Manson did the honours, leading the RCMP officers with recorded music.

Drews said Manson was involved when a portion of Highway 1 in Langley was designated the Highway of Heroes in 2011.

“It was Dave’s idea to put flags (on the memorial sign),” Drews said.

Manson also provided flags for the CAV Ride for the Fallen at the Afghanistan war memorial at the Derek Doubleday Arboretum in Langley.

“He was a great Canadian patriot,” Drews said.

Charlie’s tree takes its name from First World War pilot and flight instructor Charlie Perkins, who planted ivy around the base of a centuries-old Douglas fir tree on the family farm in 1919 to honour Canada’s fallen soldiers.

Perkins served as a Royal Flying Corp flight instructor in Ontario during the war.

In the 1960s, when the proposed route for the new Trans-Canada Highway would have run the freeway right over the tree, Perkins convinced then-highways minister Phil Gaglardi to bend the route around the memorial instead, resulting in a permanent eastbound curve in the road.

The tree, which developed a severe rot problem, was replaced after it fell in the summer of 2016.

The Friends of Old Canada Society, a Surrey-based registered non-profit replaced the fallen Douglas fir and installed a chest-high granite marker that says (in both official languages):

“The ivy planted at the base of a giant Douglas fir on this site was a memorial to North American WW1 Royal Flying Corp pilots. The pilots were trained in Canada and the United States by lifetime British Columbian Charlie Perkins, the man behind the memorial.”

The society found out about Manson’s efforts when a member saw him at work and pulled over on the highway to talk with him.

Anyone who wishes to contribute to the Dave Manson memorial bench is asked to contact organizer Dale Dryburgh by email at davemansonmemorial@gmail.com. 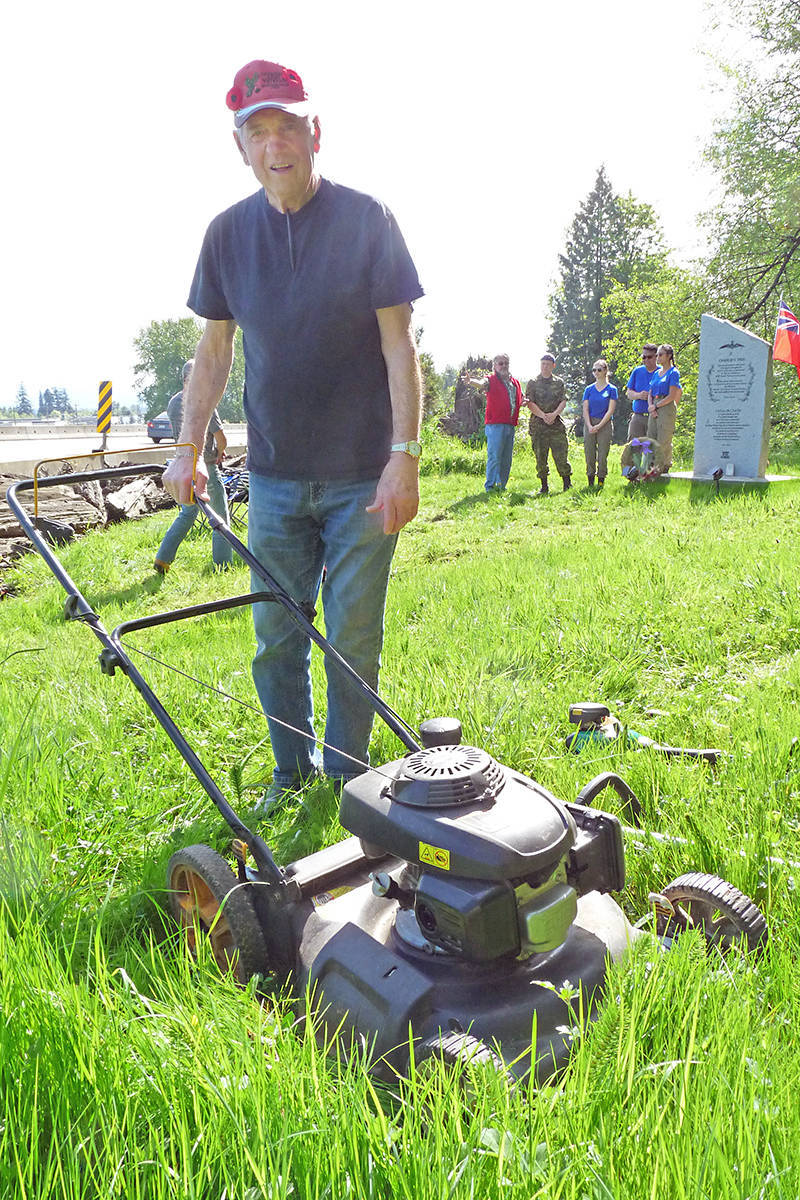 Shortly before he passed away, Manson handed over responsibility for Charlie’s tree to a group of Surrey air cadets. File photo

Looking Back: Dancing off with the win