When he is asked about his time as a soldier, Richard Jolly first talks about the year he spent in Victoria, and the year he served in Germany, before he gets to Croatia, and pauses.

The resident of Langley’s Brookswood neighbourhood served with the 2nd Battalion Princess Patricia’s Canadian Light Infantry (PPCLI) during the battle of Medak Pocket in Croatia in September of 1993, when the Canadians took on an opposing army that had been given orders to “ethnically cleanse” Croatia of all Serbs.

It isn’t something Jolly likes to dwell on.

“There’s a book about it,” he suggests, when asked to recount his experience.

There’s a documentary, too, he mentions.

Then-Master Cpl. Richard Jolly was one of the Canadians servings as United Nations peacekeepers near the town of Medak.

When Croatian soldiers pushed the Serbians back, it created the so-called “Medak Pocket,” a Croatian-controlled territory populated by Serbian people.

It was a brutal, religious war, Jolly recalled.

Jolly was in charge of combart support stores, what he terms “beans and bullets,” transporting supplies where they were needed.

Some of those supplies were body bags.

An online summary of The Ghost of Medak Pocket by author Carol Off describes how the Canadian peacekeepers in Croatia “engaged the forces of ethnic cleansing in a deadly firefight and drove them from the area under United Nations protection.”

It is considered one of the most severe battles Canadian troops have fought since the Korean War.

Off reported the Croatian army wiped out entire Serbian villages, and when the Canadians searched for survivors, they found none.

Other accounts estimate as many as 100 Serb civilians were killed by Croatian forces, and many more were seriously wounded.

Many of the victims victims were women and elderly people.

Jolly came back from the Medak pocket with bad dreams, Post Traumatic Stress Disorder and damaged eardrums that require him to wear hearing aids.

He thinks it was likely the force of the artillery fire that did it.

“I came back and it [my hearing] was gone,” he told the Langley Advance Times.

He believes his struggle with PTSD after Croatia is what ended his first marriage.

Some of the other soldiers from the Croatian battle “aren’t doing so well,” he added.

Some ended up homeless, and others have committed suicide.

Jolly reports he is doing a lot better now, learning how to manage his PTSD with counselling, and is now on good terms with his ex.

He went back to school to upgrade his skills and now handles purchasing helicopter parts as a materials specialist for a Langley-based aerospace company.

He lives with Linda Thomas, who Jolly describes with admiration as a “strong woman” who helps him keep his ghosts at bay.

And when the nightmares come back, as they do some nights, his dog, Daisy, a Chihuahua cross, will snuggle up next to him to provide her own kind of support.

“She crawls up onto my neck,” he said.

For all that he has gone through, Jolly is proud of being a soldier for Canada.

“It was an honour to serve,” he said.

That goes for his friends from the service, as well, he added.

“We would do it again, if called up.”

Jolly was a kid growing up in Aldergrove when he signed up.

He was out and about with a buddy one day, he recalls.

“I just happened to be walking past the recruiting centre,” Jolly said.

When Jolly went inside, the recruiter made a case for signing up that sounded attractive.

Jolly keeps his service medals in a display case next to the medals his grandfather, Albert Jolly, was awarded for his service in World War 2.

He was unable to attend in 2002, when then-Governor-General Adrienne Clarkson bestowed the Commander-in-Chief Unit Commendation on the 2nd Battalion Princess Patricia’s Canadian Light Infantry for the Croatian combat.

“Your actions were nothing less than heroic and yet your country didn’t recognize it at the time,” Clarkson told them.

Usually, Jolly attends the Fort Langley Remembrance Day ceremony every year on Nov. 11 with a friend from his days as an infantry solider in the Canadian Armed Forces.

But this year, with the restrictions imposed by the COVID-19 pandemic, Jolly expects he will be watching the Fort Langley service online. 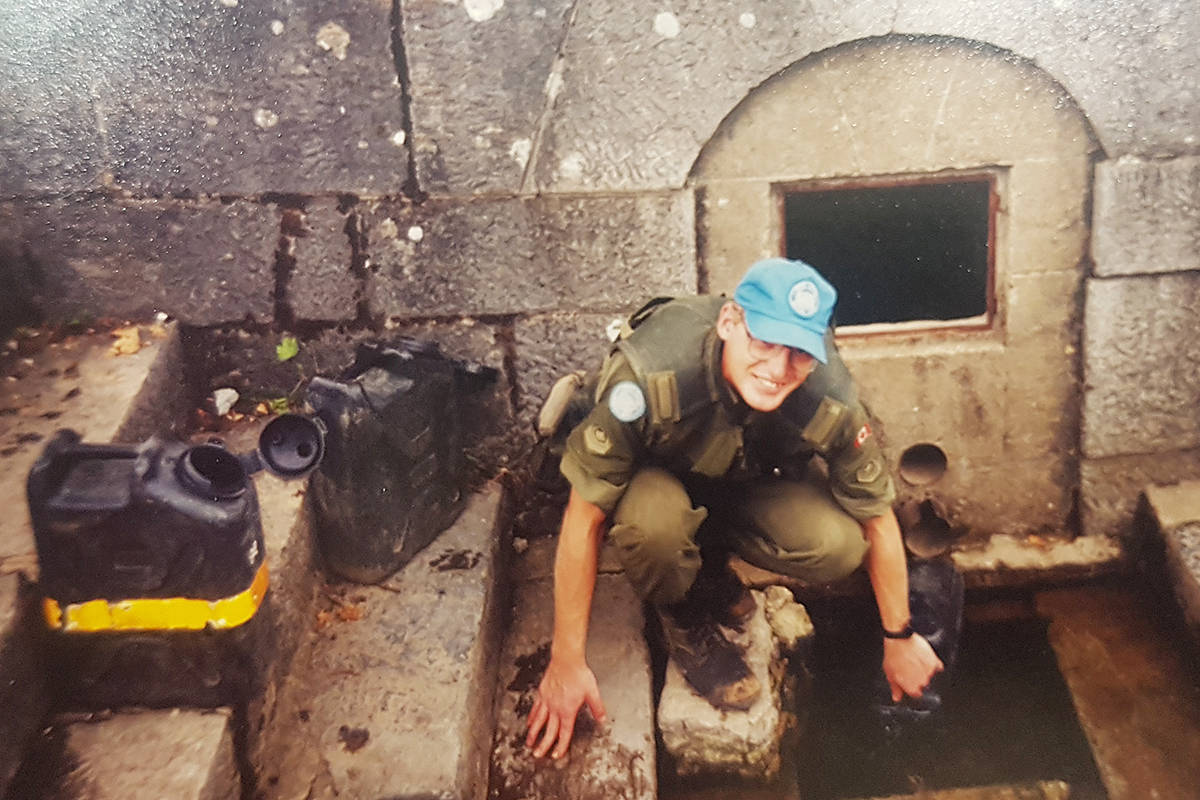 A young Master Cpl. Richard Jolly fills water jugs at a location outside Medak, Croatia in 1993. He and other members of Princess Patricia’s Canadian Light Infantry (PPCLI) second battalion would battle a Croatian army bent on the ‘ethnic cleansing’ of Serbs. (Courtesy Richard Jolly)

REMEMBRANCE DAY: Poppies available but in different ways around Langley