Violet was amusing herself the way a little sister will, annoying her older brother Thaddeus by pursuing him through the living room, hallway, kitchen and dining room areas of their Langley City home.

Ten-year-old Thaddeus tried to shake off two-year-old Violet, spinning his lightweight wheelchair around corners in a bid to elude Violet.

But the feisty Violet was just as fast in her smaller wheelchair and followed close behind, squealing with delight.

While the impromptu race was underway, younger brothers Jimmy and Darcy sat at the dining room table and played games on a tablet while Frankie, the youngest, watched from his high chair.

Their mom, Candice Welch enforced a speed limit to prevent accidents and removed the occasional plush toy when it became wedged under Violet’s chair.

It was an ordinary afternoon for her family, made possible in part by the support of the Variety Children’s Charity, that funds leg and back braces and the lightweight wheelchairs that Thaddeus and Violet both require.

After Thaddeus, now 10, was first diagnosed with genetic central core myopathy, a condition that causes muscle weakness, his family reached out to the charity for the orthotics and other supplies he needs.

“We knew about them from the telethon,” Candice said.

When Violet, who is now two, was first diagnosed with myopathy, Variety also provided her with various orthotics including braces, standing frames and mobility aids.

Basic health care only provides limited coverage for many of the items the two children require, Candice said.

She estimated the cost of orthotics for Thaddeus at about $6,000 a year, that need to be replaced every year as he outgrows them.

As well, the ultralight wheelchairs like the type Thaddeus and his sister use, cost about $3,000 and are not covered by basic medical, which only pays for bare-bones wheelchairs and requires patients to cover the cost of extras like swivel wheels.

Variety’s assistance helps both kids to have an active life.

These days, the math-loving Thaddeus plays wheelchair basketball and sledge hockey, where he is often the youngest player

He started when he was six, playing against older competitors.

“I was supposed to be eight,” Thaddeus said.

Violet needs very little help maneuvering, but sometimes well-meaning strangers will try to intervene when they see her scooting through a shopping mall or down a sidewalk, Candice says.

“Not many people have seen a child her age in a chair.”

Candice said her daughter always likes to go full-tilt in her chair and will sometimes stop by running into things like walls, and furniture, and people.

This weekend, Variety will hold its biggest fundraising event of the year, the 53rd annual Show of Hearts telethon.

It will air live on Global BC on Sunday from 9:30 a.m. to 5:30 p.m. from the Molson Canadian theatre at the Hard Rock casino.

“With your help, Variety is able to make the impossible, possible for so many children,” she said.

Donations to the Show of Hearts can be made by calling toll free at 310-KIDS and online at variety.bc.ca or by texting “KIDS” to 45678 to make an automatic $20 contribution.

Viewers can also register now to have their own fundraising page to connect with friends, families and co-workers in support of Variety.

For over 50 years, Variety has distributed more than $30 million in funding to families and organizations in communities across the province. 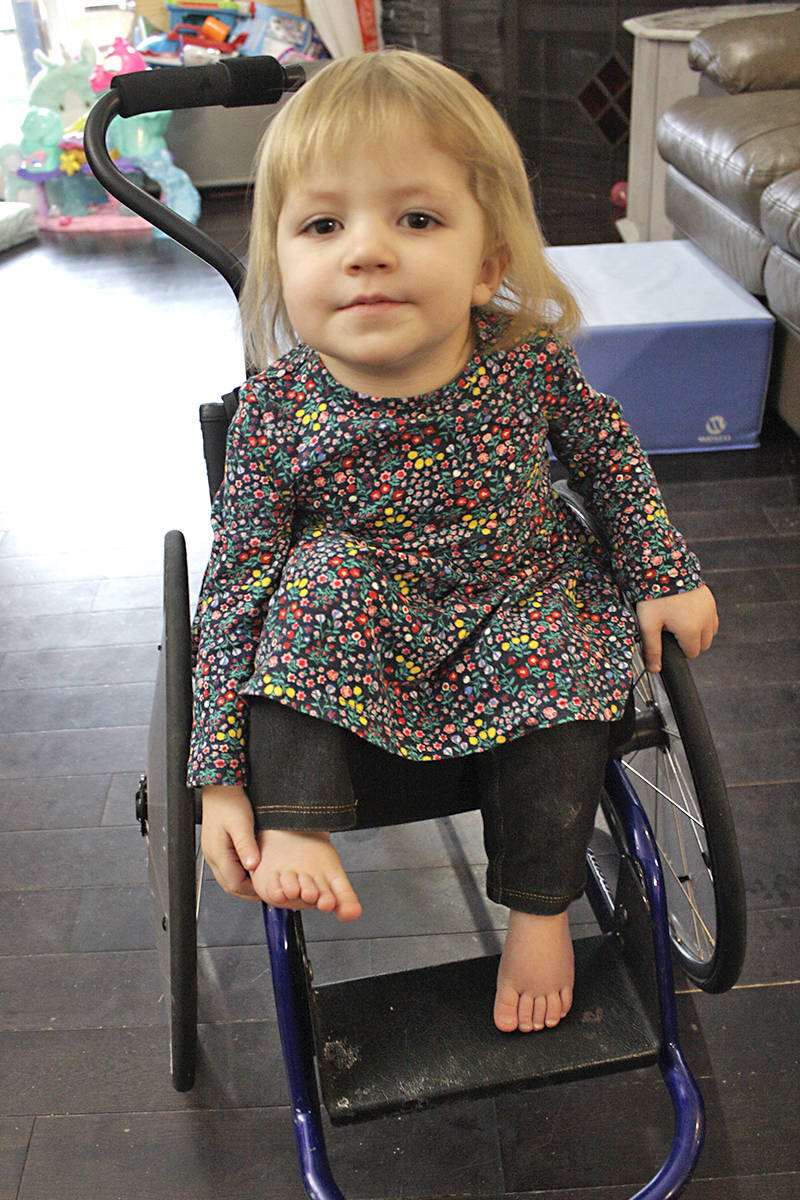 Two-year-old Violet sometimes unnerves well-meaning strangers by the way she can throw herself around in her chair. Black Press Media photo

VIDEO: Cold start to Year of the Pig in Langley