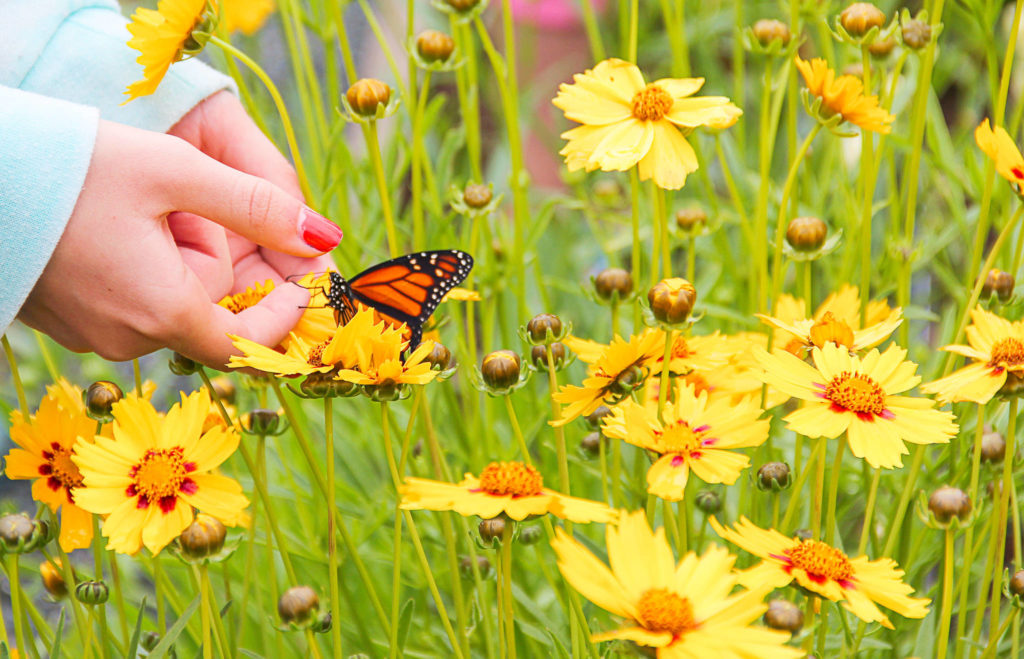 With the gardens at Krause Berry Farms always expanding, the butterflies are tending to stick around longer than ever after the annual fundraising release. (Special to the Langley Advance)

Aldergrove’s Harry Hunt was a regular, amid the crowds of hundreds who attended the annual butterfly release at Krause Berry Farms.

But after the loss of his wife Betty, the event took on special meaning for the community advocate.

One year, he took home more than a camera full of breathtaking photos, but a butterfly that he quickly released into a garden he and his wife Betty had nurtured and cherished together for so many years.

After that, he spoke with family and friends about that butterfly, moved by the fact that it stuck around the garden for many days.

It was something special that meant so much to him, and would have meant the world to his wife, Hunt shared. Admittedly, it also helped him in saying goodbye to his love.

“That butterfly was special to him, and he carried that experience around with him,” said Langley Hospice Society’s Shannon Todd Booth.

While most don’t purchase and take a butterfly home with them, they do chose to release a butterfly at the farm. It’s a way of remembering a loved one who has passed, while also helping the host charities raise a bit of money.

The release gives everyone present a chance to admire one of nature’s beautiful creatures, and at the same time to tap into those feelings of grief and remember a loved one fondly, Todd Booth explained, noting that many current and former bereaving clients attend as a tribute.

“I think it provides different things for different people… whether they chose to release a butterfly or not, many take a little private time to grieve… it has been impactful for many to have this way to celebrate and remember loved ones,” she elaborated.

For the fourth year running, the local hospice is partnering with Langley Care Society to host the butterfly release and fundraiser on Saturday, July 8.

So far, they have orders for more than 400 butterflies. That’s up from 350 released last year and the largest number yet.

This year, because monarch butterflies are apparently hard to find, they will be releasing painted ladies.

“It’s become a truly unique way to engage people in a conversation about who we are and what we do in the community,” Todd Booth said, calling the event a fund an awareness raiser.

Last year’s event raised more than $3,000, which was shared between hospice and Langley Lodge. This year, they’re adding a 50/50 draw they hope will generate a bit more money for the causes.

The event also includes children’s crafts, facepainting, and other entertainment.

Sandee Krause, co-owner of the farm, admits this is one of the more significant events for both her, and her husband Alf, each year.

Alf needed hospice 20 years ago, “and they were there for him when he lost his first wife to breast cancer,” Sandee explained.

“We feel very privileged to host this meaningful event each year, as a way to say thank you to them for being there to support him, we support them.”

It is “amazing” to watch all these people release the butterflies then follow them around the garden as they freely land on flowers and bushes.

Sandee said the event gives “an incredible feeling of beauty, love, and peace… It’s so beautiful to watch.”

There are lots of people, lots of activity, “and yet as they release their butterfly they are completely in their own world of private thoughts – ranging from celebrating a recent engagement or anniversary, to remembering someone very dear to them,” Sandee said, recalling the first time she released a butterfly in memory of someone special to her.

“I opened my envelope and my butterfly flew out and stayed with me… I didn’t want to leave the garden until it flew away and every time that I tried to move it stayed near me and followed me. It was just such a special feeling, eventually it did fly away and there was beauty – as well as peace – in that flight.”