Many in the western world take clean water for granted.

We simply turn on a faucet, and it’s there for drinking and cleaning dishes.

In many developing countries, clean water is scarce, a priceless commodity.

That’s the impetus behind Revive Washing owner David Moerman’s willingness to sacrifice a share of his company’s profit margin to help provide clean water to people in Cambodia.

Based out of Moerman’s home in Surrey’s Clayton Heights neighbourhood, Revive Washing washes homes in Langley, Surrey, and White Rock (cleaning windows, gutters, and siding), and sponsors projects to bring clean drinking water to people across the world who don’t have it.

In late November, he took a trip to Cambodia see the water projects in person.

“These people have never had clean drinking water,” Moerman said. “They are going to a swamp to pick up water that they’re all getting sick from.”

Moerman met a family — a mom and five girls — who had never had clean water, until their hand-dug well was constructed.

“It was really cool to see,” Moerman said. “Our company sponsored two hand-dug water wells. It’s confirming why I’m wanting to do what I’m doing. I didn’t start a business just to make money. I wanted to be profitable but also do good.”

The family was extremely grateful for the well.

“It was a language barrier so it was a bit tricky, but she is a shop owner, and she sold some food and small goods at the front of her property,” Moerman shared. “She’s using the well to wash all her fruit now. She washed a papaya for me. They’re really nice people.”

Every year HOPE International Development Agency donors support between 50 to 65 initiatives in as many as 20 countries worldwide, many of which give people access to reliable supplies of clean water in their communities.

HOPE oversees the construction of the wells; Revive donates funds “from the top of our revenue,” Moerman noted, and does some marketing for the projects.

Three years ago, Moerman got involved with Charity Water a New York-based, non-profit organization with a goal of bringing clean and safe drinking water to people in developing countries.

He said in the washing business, the profit margins are reasonably high.

“There’s a little bit more meat on the bone that you can go and do something a little more charitable,” Moerman said.

He plans on continuing to fund wells in the future.

“This is my big rock for the next bunch of years,” Moerman said. “We did two water projects with last year’s money. This year we’re trying to do four. We want to keep growing.”

On New Year’s Eve, Moerman and Bryan Wolgram are hosting Party4aPurpose, a charity year-end bash at the SKY Hangar at Pitt Meadows Airport.

Admission is $40 per person, and it supports clean water projects in India, Nepal, and Cambodia through Charity Water.

A total of 663 million people don’t have have access to clean and safe drinking water, so 100 per cent of the funds from Party4aPurpose goes directly to building water wells in developing countries.

Last year’s party at the SKY Hangar, had a full house and sold over 400 tickets, which raised $9,075 to build a water well for a village in India. 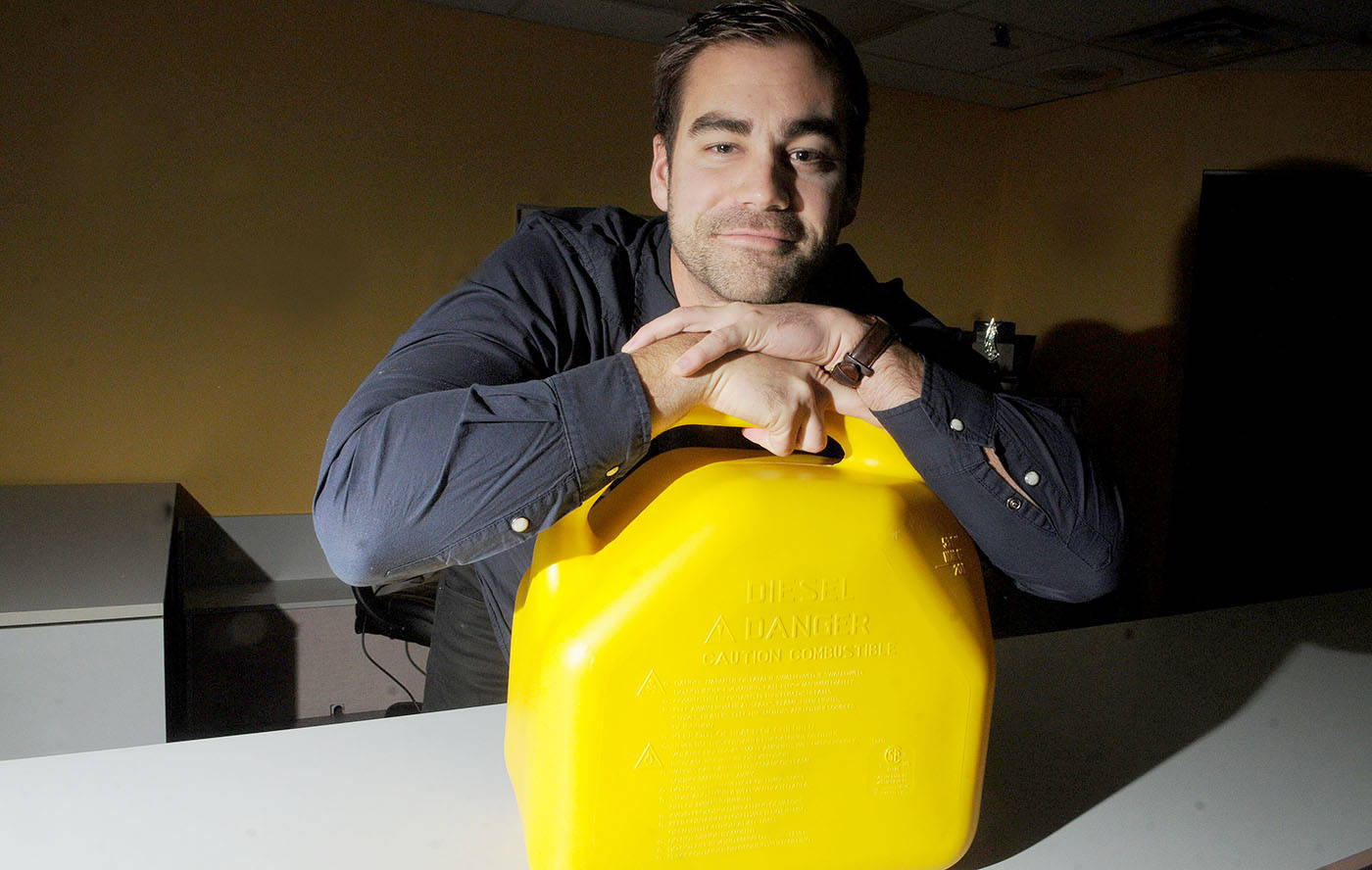 David Moerman, owner of Revive Washing, shows the containers that villagers use to carry water to their homes in developing countries. Troy Landreville Langley Times