Passing of a 75-year-old Willoughby woman has inspired a kindness movement that is now spreading beyond Langley’s borders.

Maureen (all the little kids in her world called her Moe Moe) Hargreaves passed away in August 2019, and within days a group was launched dubbed the Moe Moe Effect – a grassroots kindness initiative aimed at spreading thanks and appreciation to all.

There are now almost 250 people from all over the Lower Mainland and even other parts of B.C., Alberta, and back East, who are continuing Hargreave’s legacy of kindness and compassion.

The project aims to encapsulate Moe’s overwhelming propensity for compassion and giving, Morgan explained, recalling how her mother always reached out to help others.

Moe wasn’t wealthy – from a financial perspective – but was always giving to others in any way she could, Morgan recalled.

That was exemplified by her buying all her coworkers coffee every morning of her career. It was witnessed when she went shopping for school supplies for a family in need. It was seen when she picked up the tab when out for dinner with friends, to name a few examples. She donated to numerous charities. She volunteered her time. She’d buy tickets for any cause, and if she won a prize, she’s usually donate it back.

“It’s true. She was somebody who didn’t have a lot, but it meant so much to her to be able to do these little things… it was how she showed her love,” her daughter elaborated. “She had that kind heart… she was always there to support you in whatever you needed and you could ask her for anything. She’s be there in a second for you.”

Hargreaves demonstrated kindness in virtually every aspect of her life, and her daughter aspires to emulate mom with the Moe Moe Effect group that was started just after Moe’s celebration of life.

Fresh out of the gate, Morgan and her posse of three started performing a few random acts of kindness. Then, Morgan took to Facebook and encourage friends and family to jump on board. Many of them did.

But the kindness efforts didn’t end there.

With Mother’s Day approaching, and it being the first without mom by her side, Morgan refused to sit around and feel sad.

“That’s not what my mom would have wanted.”

Instead, Morgan put a huge bucket of tulips at the end of her driveway with a note encouraging any mother, mother-to-be, step-mother, puppy mother, etc. in the neighbourhood to help themselves.

The note indicated that while she and her family couldn’t celebrate with her mother in person anymore, “we can celebrate all the amazing mothers out there on this special day… take one flower to brighten your day and celebrate you.”

That was May. The next big milestone without her mother fast approached in July, when Moe would have celebrated her 76th birthday.

Morgan took a hand written note from her mother, excised the word “love” and blew up the image and had it emblazoned on a few sweatshirts for family. As Mom’s birthday approached, she wondered if others would want a sweatshirt or T-shirt with the “Love” message inscribed across it, as a fundraiser for the Heart & Stroke Foundation. She sold 60 and was able to donate more than $700 to the cause.

And again, with another huge grieving milestone approaching, the anniversary of Moe’s passing, the team decided to perform a day kindness – hoping to perform 75 acts of kindness, one for every year of her life.

“We invited our friends and family to join us, and they shared their stories that day. Over 110 acts of kindness were performed that weekend in my mom’s memory.”

Most recently, with Christmas approaching, Morgan began brainstorming ideas for the holidays during the last weeks of November.

They conceived of a 12 days of caring campaign that came to fruition in the form of gifts of thanks to some of the essential service workers in the community.

The undertaking included making some purchases from mom-and-pop/small business owners to show support for their struggles, delivering pizza to the paramedics, having children’s draw “thank yous” for the postal workers, giving gift cards and “Love” T-shirts to some of Langley’s teachers, taping chocolates to bins for some of the waste collection teams, dropping off coffee and donuts for a few local firefighters, offering other forms of acknowledgement for some of the grocery store workers who keep things going during the darkest days of lockdown, and expressing huge thanks to health-care workers who continue fighting to care for those stricken with the virus.

“It’s just about finding neat and interesting, but safe ways, to recognize them and say thanks for doing what they do,” Morgan said.

She added it’s not about spending loads of money but rather finding creative means to express appreciation.

“We just try to have fun with it,” Morgan said. “In a time when Christmas feels heavy because of the COVID pandemic… it just brings me so much joy and so much life.”

Morgan noted that it may be difficult – amid the pandemic – to perform some typical kindness efforts. For example, people can’t just run up to someone and give them a thank you hug. But the Moe-Moe Effect group is proving gratitude is still possible.

That’s why they’re already planning to repeat the day of kindness on Moe’s birthday again in 2021, and beyond, in her mother’s honour.

And Morgan continues to invite other like-minded people – through social media and cards handed out during their random acts of kindness – to be part of the uprising.

“We’re just a loving group that want to spread more kindness,” Morgan said. “It just warms my heart. This group and the Moe-Moe Effect hashtag and that kind of stuff has allowed me to find peace and joy and positivity in something that was very traumatic for me – and I know that’s what my mom would have wanted.”

In fact, Morgan insisted: “Mom would have definitely approved… this is a small way that we can honour her memory and bring a smile to our community!”

What are you doing to spread kindness? 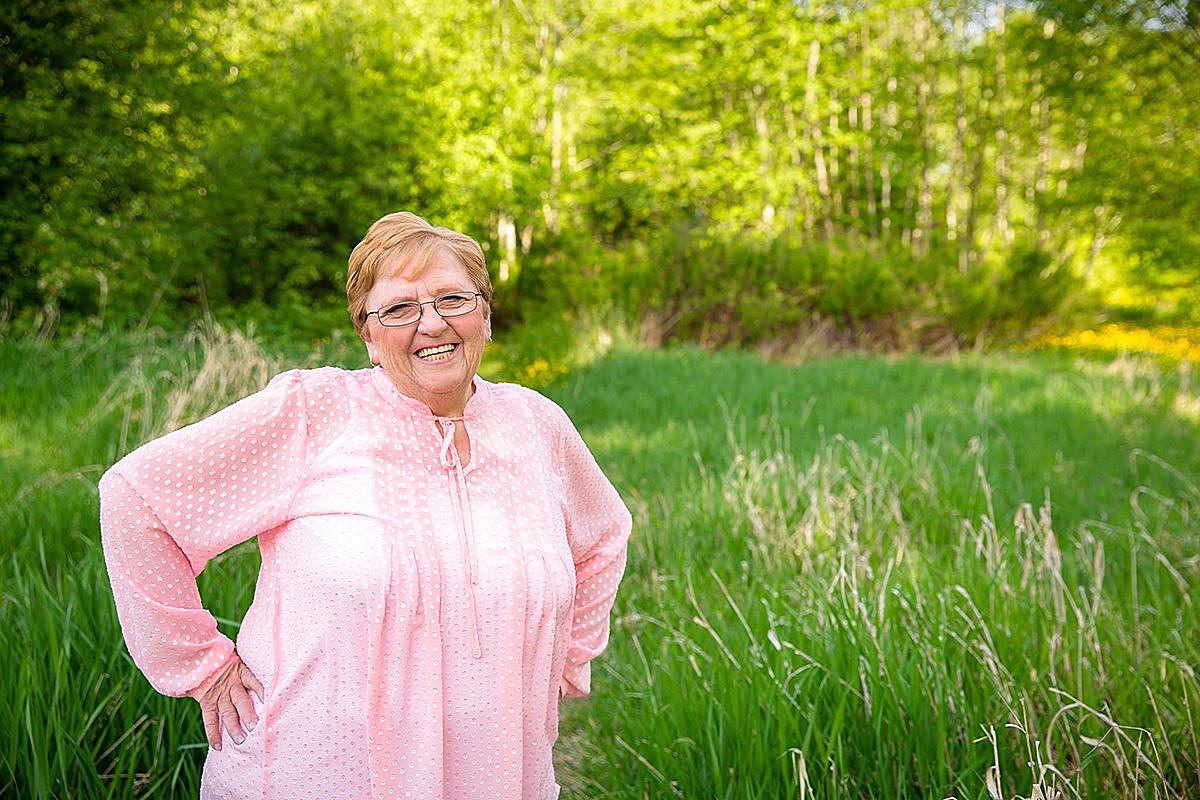 Maureen (Moe) Hargreaves passed away at the age of 75. The Langley woman is remembered by her daughter, and now a few hundred other people, for her generosity and willingness to do for others. Her daughter is spearheading a kindness initiative in her memory. (Special to Langley Advance Times) 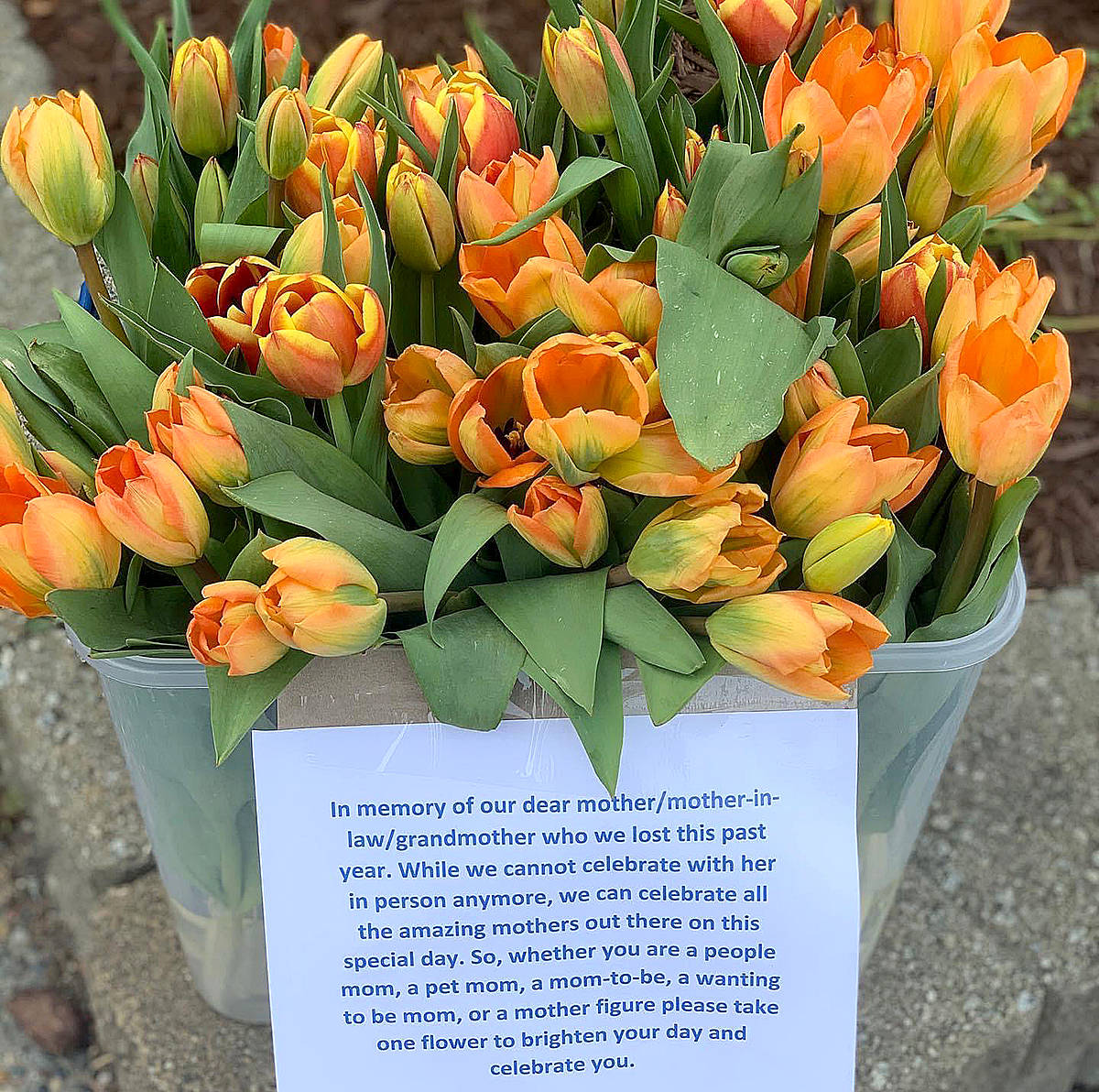 The Moe Moe Effect was kicked off last Mother’s Day with the giving of tulips to any and all mothers in Morgan Green’s neighbourhood. The initiative has continued to grow since then. (Special to Langley Advance Times) 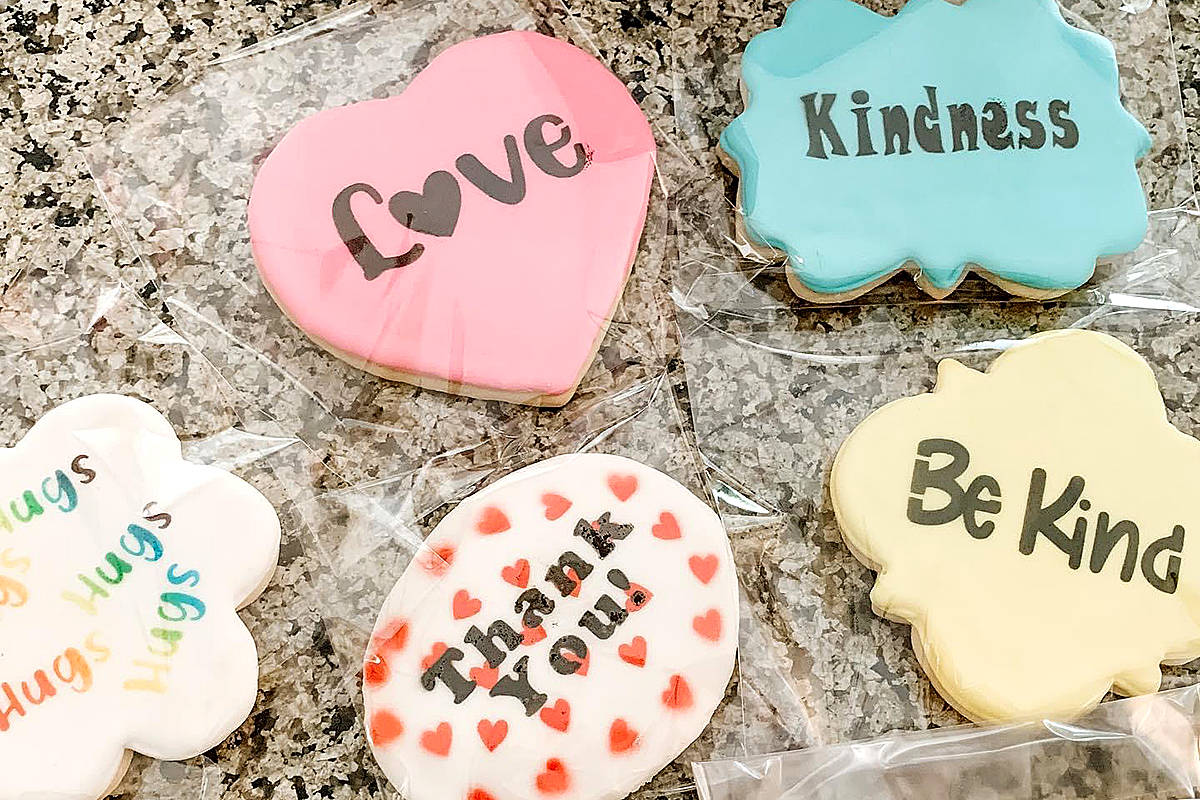 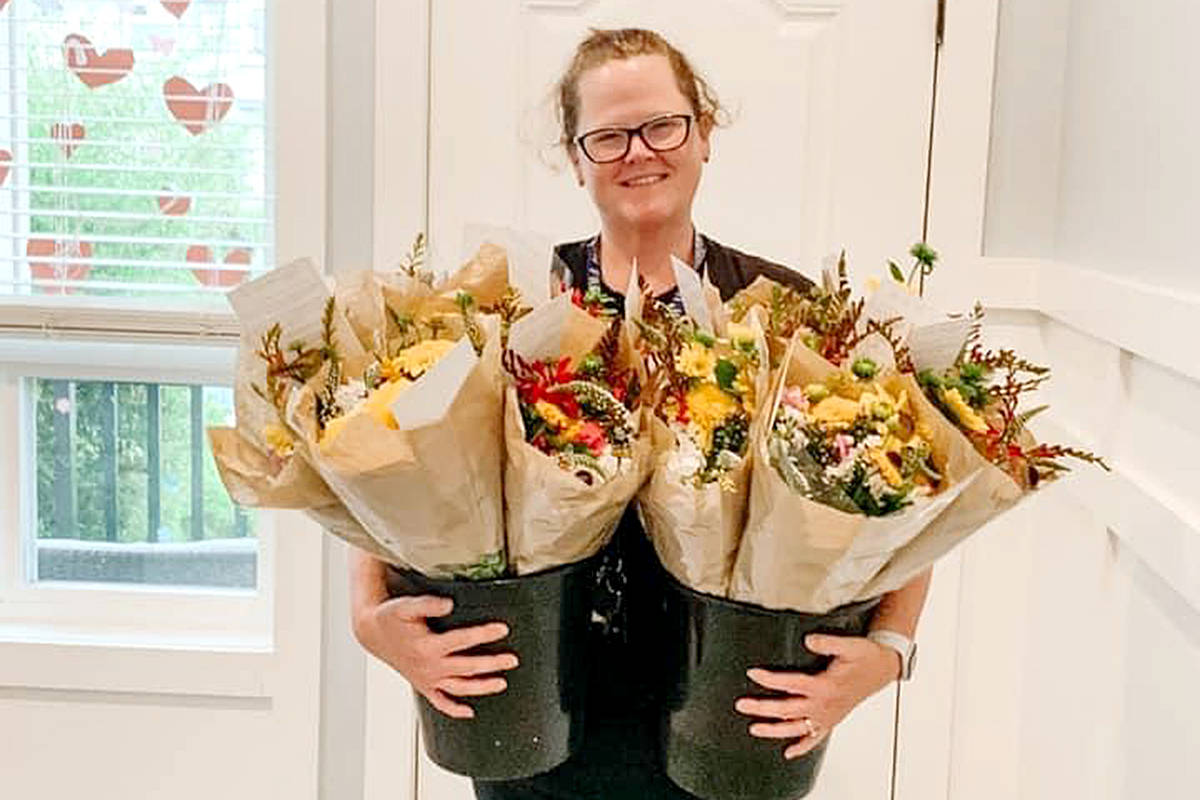 Morgan Green cashed in points, redeemed gift cards, and threw in some of her own money to buy flowers to randomly give away, all as part of the Moe Moe Effect. (Special to Langley Advance Times) 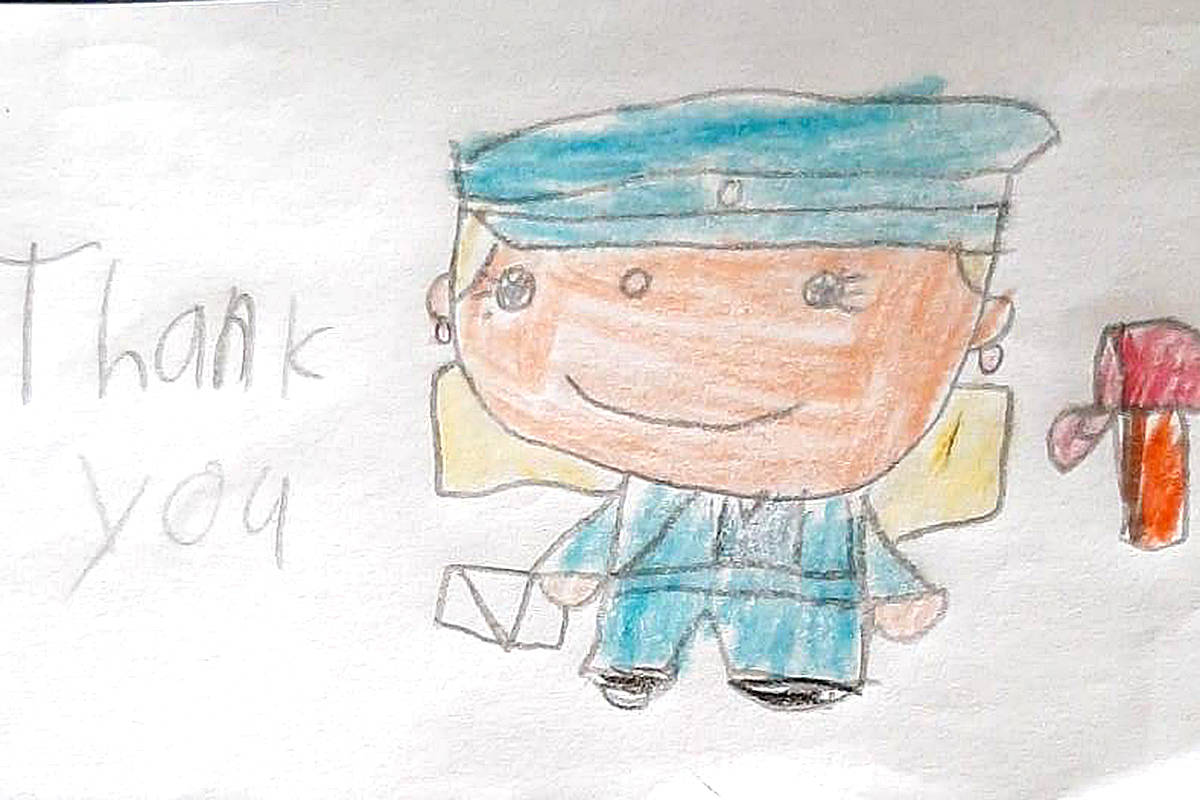 This Christmas, a few children were asked to draw thank you notes to the posties from Canada Post, as part of the Moe Moe Effect. (Special to Langley Advance Times) 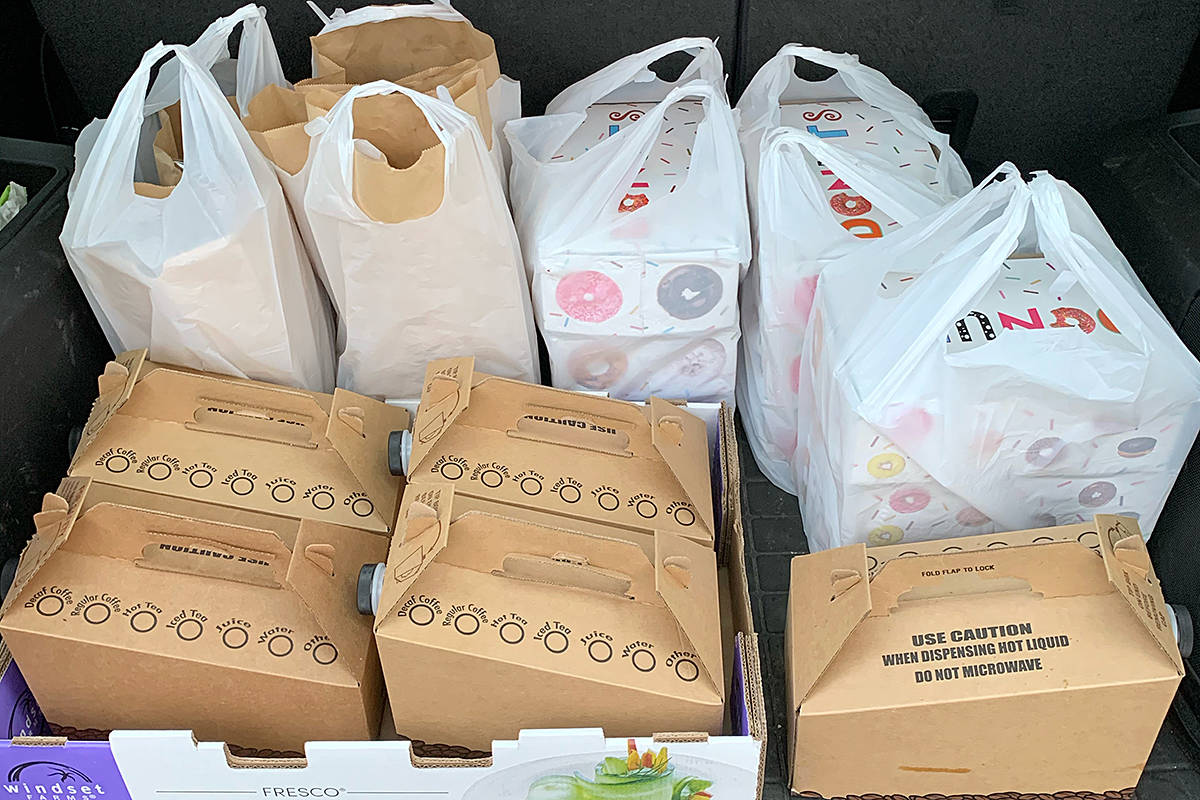 Bags of donuts and tubs of coffee were dropped off to local firefighters during the holiday season, as a form of thanks. It was part of the Moe Moe Effect – a grassroots kindness initiative started in Langley but spreading. (Special to Langley Advance Times) 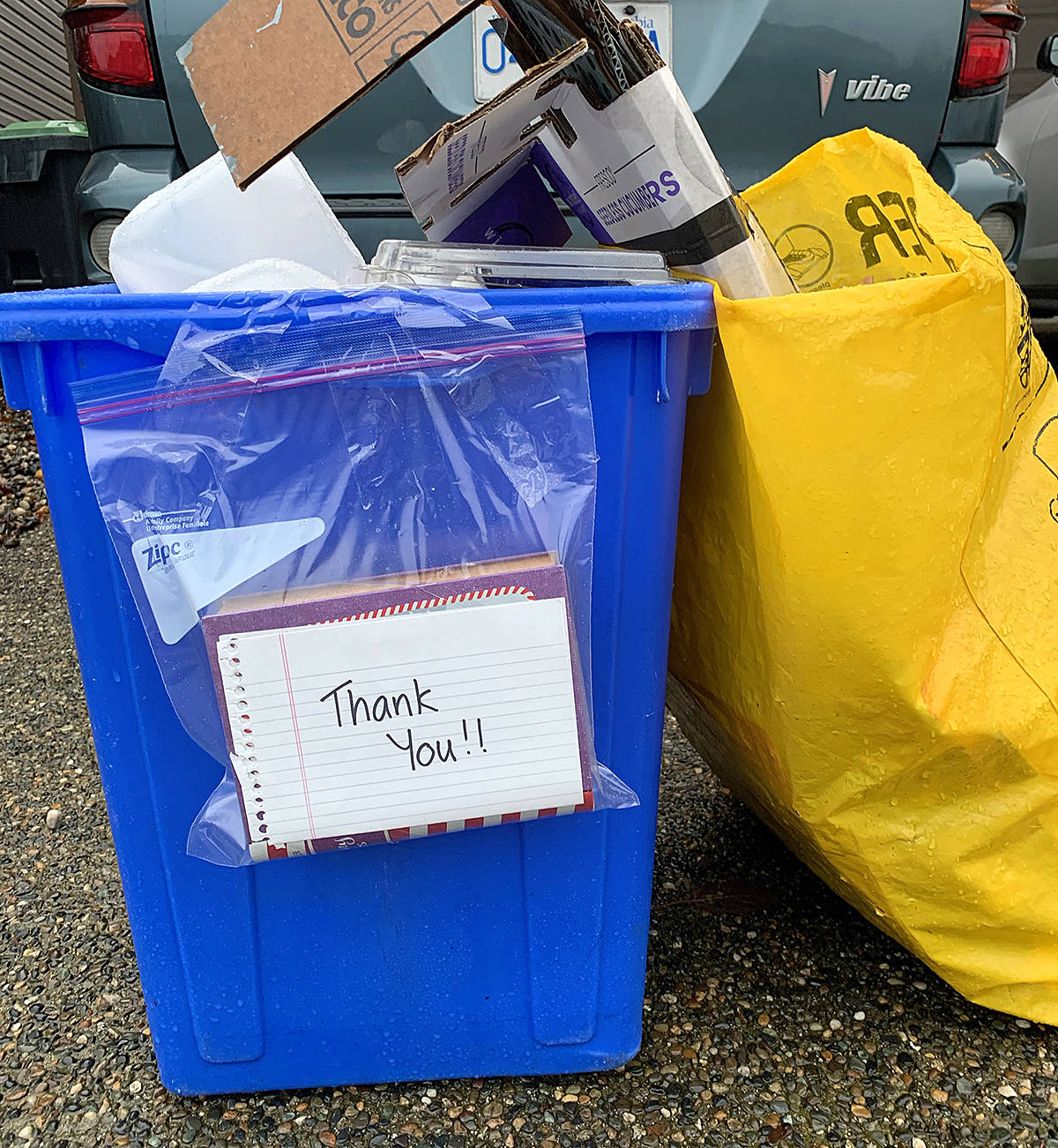 Tokens of thanks, including boxes of chocolates, were taped to bins that were put out to the curb. Enclosed was a thank you note to the waste collection teams for their efforts. It was part of the Moe Moe Effect. (Special to Langley Advance Times)