As a new 15-bed hospice in Langley comes closer to fruition, an event this past weekend helped buy a few of the extras that will help make it more like home.

The bills for construction – which is expected to start early in the new year – are covered. Now, the task at hand is fundraising to help furnish and outfit the new facilities, said Shannon Todd Booth, the hospice communicaitons and fund development manager.

“With funds in place to build a new 15-bed hospice residence, the Langley Hospice Society is looking to the community for support to help us meet our goal of raising the $1 million necessary to furnish and outfit the new hospice residence and truly make our new house a home for all who enter its doors,” she explained.

In addition to the $21,000 raised at the event, Saturday was also a time to recognize one of the larger contributions towards the residence.

“For more than 35 years the Langley Hospice has focused on the one thing none of us want to – the end of life. They provide emotional, social, and practical support to thousands of patients and their families each year,” Gabara told the audience of 100-plus.

“Without the hospice, their services, and hundreds of dedicated volunteers, many in our community would face this journey alone. We in this room have the ability, the power, to make sure this does not happen. We are extremely excited to be making this commitment to a project that will help so many,” she shared with the sell-out crowd.

This donation, plus other money raised at Saturday’s fundraiser, will make a “huge impact,” said hospice executive director Carissa Halley.

“It will enable us to truly make our new house a home for end-of-life patients and their families,” Halley said.

Saturday’s night also featured live entertainment, refreshments, and silent and live auctions, plus a tear-evoking speech by a Langley woman who was “significantly” touched by hospice this past year.

Two peas in the pod of life and death

Deborah Solski shared her hospice story with the crowd at Glass Half Full:

A few years ago, the love of my life was diagnosed with terminal cancer.

It shattered our lives and crushed our dreams of hand holding and wine sipping when we eventually retired to our cabin by the lake.

Walt’s chemo started, which included all the horrible side effects, with only the hope that his life maybe would be prolonged by a year or two.

A lifetime must now be measured in days, not years, by moments, not hours.

Every second now needed to be memorable.

Five months later, with Walt’s chemo just finished, I was diagnosed with cancer and my own chemo and radiation began.

Walter and I spent the next year and half as caregivers to each other as we battled major infections, medication rejection, constant needles, and vomit bags as part of our regular items to carry with us wherever we went.

Through it all, Walt and I were together, looking after each other through the tears, the pain, the days of false hope and the tearful moments of any positive results.

Whoever was less sick that day looked after the other and the next day the roles were likely reversed. We were like two peas in a pod of life and death.

As I was recovering from own my cancer complications, Walter was becoming worse and eventually he was totally homebound, unable to drive – no more fishing at the cabin (his favourite pastime), hooked up to pain-relieving medications, with injections given by myself every few hours.

Dr. Duncan, the hospice doctor, came to visit Walter, sometimes twice a week for more than an hour, talking to him about everything from his childhood and our beautiful grandchildren to his pain management and thoroughly explaining his death expectations.

Through it all, I was there, cleaning up the night time messes, rubbing his back while he cried, combing his hair when it started to fall out, telling him that he still looked as strong and handsome as the day I met him 37 years ago.

Eventually the day came that I broke down and could not do it anymore.

Dr. Duncan gently told me that it was time now; time to take Walter into hospice care.

She predicted only a few more days until Walt would no longer be by my side.

I was so sure she was wrong.

I was quite capable of looking after Walter myself, I needed to be with him, I didn’t want to miss out on any precious moments with him, I might miss something special, after all he was my life.

But I was so very, very tired and I guess it showed on my face.

I was promised that if Walt went into hospice I would get unending support from people who would look after my dying husband with the medical skills and exceptional compassion that he needed, and I could again become just the wife; we could sit side by side, content just to be near each other.

Walter went into hospice, and I gave up my caregiving responsibilities to the umbrella of love and support that I immediately felt upon entering the door of the hospice residence.

It was such a relief, I cried and cried until I had no more tears left.

Walter was treated like the man he used to be, respect and admiration was seen in the eyes of the hospice nursing staff as he told them that he used to be the manager of Willowbrook Mall; he used to be a pillar of the community. They knew that he was still that community pillar inside of his dying body.

Hospice became our special world, side by side, talking about the old days when our two now grown boys were young, our hearts were foolish, our road trips went anywhere and nowhere and when our biggest decision was who was going to clean the fish we caught (which was always Walt).

I was able to sit and talk to Walter as my loving husband, my soul mate, without the unsettling thoughts of body cleaning messes, feeding fights, medication measurements, and listening for breathing noises to make sure he was still alive.

Now I was able to just love Walter, like in the days of old, no responsibilities, just loving, laughing, reliving stories and even a little lying about what our future retirement plans would be when he got better.

The hospice staff were wonderful, they cared for my Walter as if he was their own husband, father, brother, like their own family member.

When Walt was having a difficult day, they would gently swoop in, tell me to have a cup of tea and when I came back in, Walter would be in fresh clothes, hair and beard combed slick, tucked in with clean sheets and soothing music playing from the TV mounted on the wall.

It was a spiritual experience that I will always be so grateful for and that allowed Walt’s last days to be as pain free and restful as possible.

I can’t count the number of days when one of the hospice volunteers would come into the room with cup of hot tea for me, sit beside Walter and talk to us; asking how our day was going, what the weather was like and what our lives had been like outside of the hospice room.

The love and support that I felt from the hospice volunteers and staff was so wonderful that I was moved beyond words.

Their positive words were exactly what Walter and I needed, even when Walt was no longer able to respond to their sympathetic words, I was thankful for their compassionate physical presence.

Walter stayed in Langley hospice for over two weeks, each day slowly deteriorating, needing more and more care as the days went by.

Everyday the hospice team, doctor, nurses, and volunteers stayed close to Walter making sure that he did not feel pain, cleaned him as his bodily functions slowly ceased to function and made sure that there was always a tray of food on his table even when he no longer could eat solid food.

They treated him with the dignity he deserved as the strong man he used to be.

I spent the days by Walter’s side, singing and playing the ukulele that he had bought me six months before for my birthday.

Our dog Moodle slept under Walt’s bed, and the days were filled with support and contentment that only comes when you know that you are surrounded by love and complete understanding.

It was my privilege to be singing and strumming the ukulele to the Beatles song Let it Be as Walter drew his last breath, and I will not forget seeing the tears in the eyes of the hospice nurses as they checked Walt’s vitals and told me that he had passed on.

I recognized that his death had impacted their lives, also.

In the short time that he had been there, Walt and I had become part of the hospice family.

I was honoured to be a part of that supportive family; I would not have gotten through it without the unconditional love and compassion I felt from everyone at the hospice residence.

My world has been shattered by the death of my soul mate of 37 years, yet I feel that the days I spent at hospice have somehow given me the closure and the strength that I will need to move forward with my life.

I thank all of the staff and volunteers of the Langley hospice residence for sharing their own personal stories, allowing me to feel so not alone through this life changing experience.

They had dedicated their own hearts to ensuring that Walter’s last days were filled with dignity, respect and self worth.

My husband passed on less than one year ago and my world has been transformed, but I never would have gotten through those two and a half weeks without the love and support of my hospice family.

Each of you will always have a place in my heart and a thankful hug from deep within my soul.

To those of you here at this event, please help the Langley Hospice Society as they look to the community for support for the new hospice residence.

It is so important to create a place for patients, family and loved ones as someone you love approaches the end of their life in a supportive, compassionate environment. 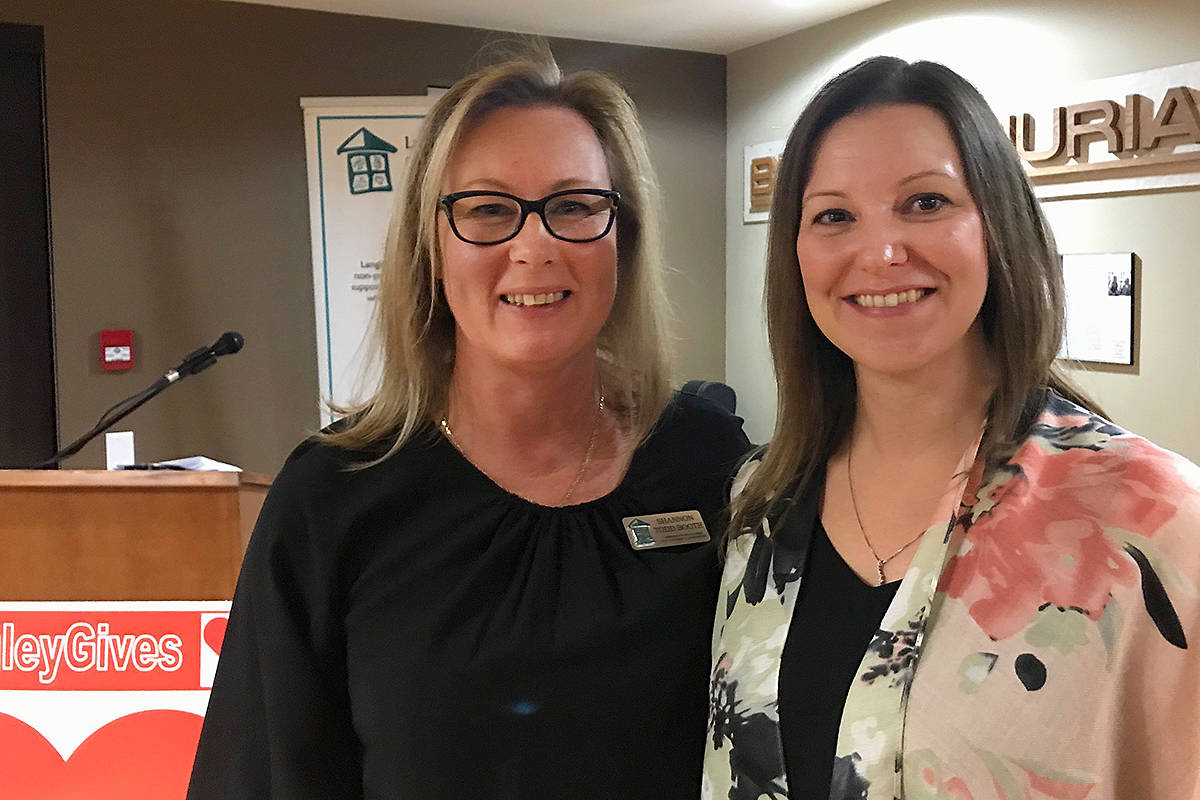 Hospice’s Shannon Todd Booth thanked Tanya Gabara of Gateway Casinos & Entertainment for the $25,000 gift she presented on behalf of Langley City’s own Cascades Casino. The presentation for the new hospice residence was made during Saturday’s second annual Glass Half Full fundraiser. (Lisa Farquharson/Langley Advance Times) 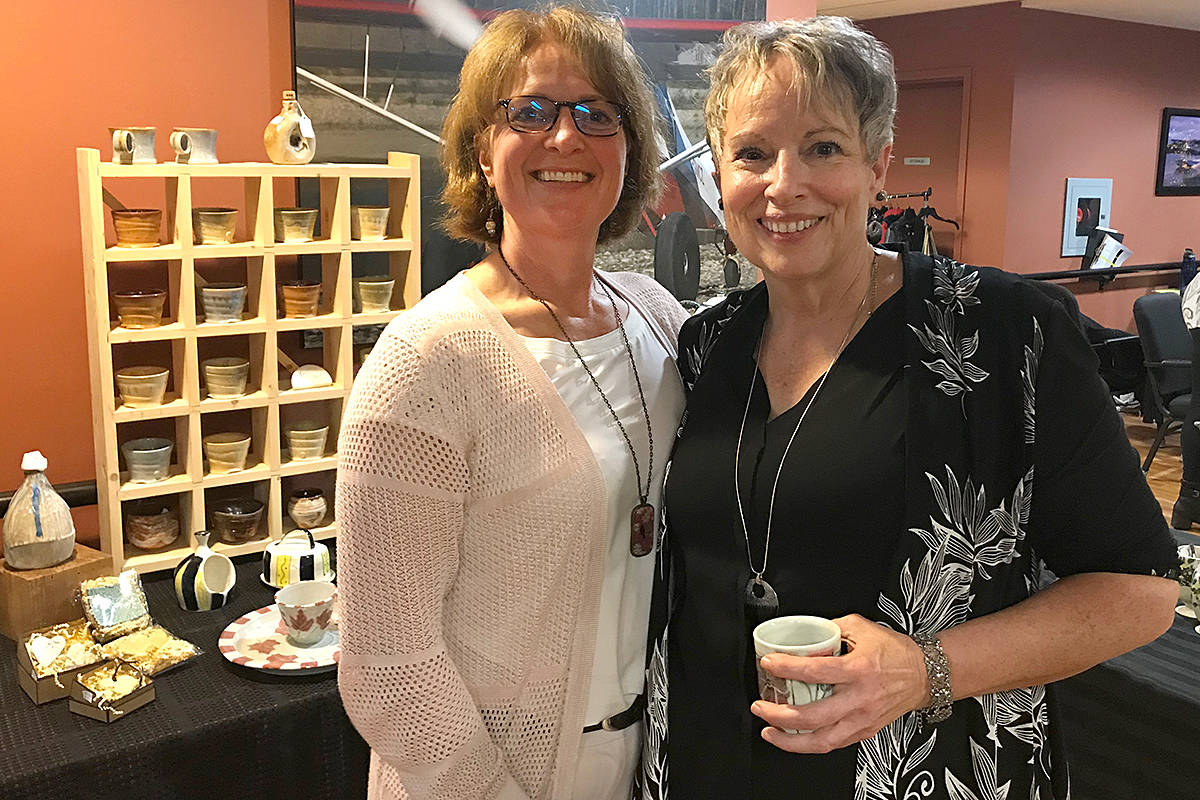 Deborah Solski shared her hospice experience, as she was there earlier this year for the passing of her husband of 37 years, Walter. (Lisa Farquharson/Langley Advance Times)

Thanks for Caring tea spotlights Christmas bureau work in community