Members of the Rotary Satellite Club of Langley Central Sunset came through with some much needed warm clothing just ahead of the most recent cold snap.

A recent club clothing drive generated some donations for those in need in Langley, said the club’s service chair Leanne Cassap.

While this was one of the group’s many community service projects, the clothing drive saw participation from multiple organizations and individuals in Langley, and club members were “overjoyed” with the response, Cassap said when handing over the donations to Salvation Army’s Gateway of Hope.

“We filled up an entire back of an SUV,” cheered Cassap.

The two-year-old local Rotary Club collaborated with Langley Seniors Resources Society and used their parking lot to set up a donation station earlier this month.

The collected donations were then delivered to a very grateful group at Gateway of Hope, said their executive director Emmy Skates.

“We are so grateful to the Rotary Satellite Club of Langley Central Sunset. The Christmas season can be a difficult time for many, especially those who are struggling with homelessness, addiction, and mental illness,” Skates said.

“However, this act of kindness means the world to the men and women who will receive a warm jacket. It is because of our community members, like the Rotary Club, that we are able to continue serving those who are in the greatest need.”

“To everyone who contributed, please know that your contributions were well received and very much appreciated. It is so heart warming to see the community come together in this way,” added Cassap.

Rotary Satellite Club of Langley Central Sunset was established in January 2019 with an aim to “do things in the community that are hands-on and make a difference,” explained Cassap.

Since its launch, the club has conducted multiple fundraising and community service events, including park cleanups and volunteer gardening.

One of the highlights was the flag installation fundraiser in which Rotarians installed Canadian flags for Canada Day outside the homes of those who showed interest for a $50 charge. The club later decided to continue the project for the coming years and expand it to include B.C. Day and Labour Day, as well.

Club meeting chair Travis shared that he joined the club for networking but decided to stay.

“We do so many incredible events in the community with support from local charities,” he said.

“I am in the club as I believe in what they [Rotary Club] do and the difference they make in and around Langley Township, Langley City and beyond,” said another member named Tanya.

Currently, the volunteer-run service club consists of 12 members, mostly working professionals and local business owners. But, Cassap said, it is open for anyone to join.

“The only criteria is that you should be willing to make a difference in your community,” she added.

For more information on clothing drive or member applications, the club can be reached out at 604.308.6030 or via email at info@langleycentralsunset.ca. 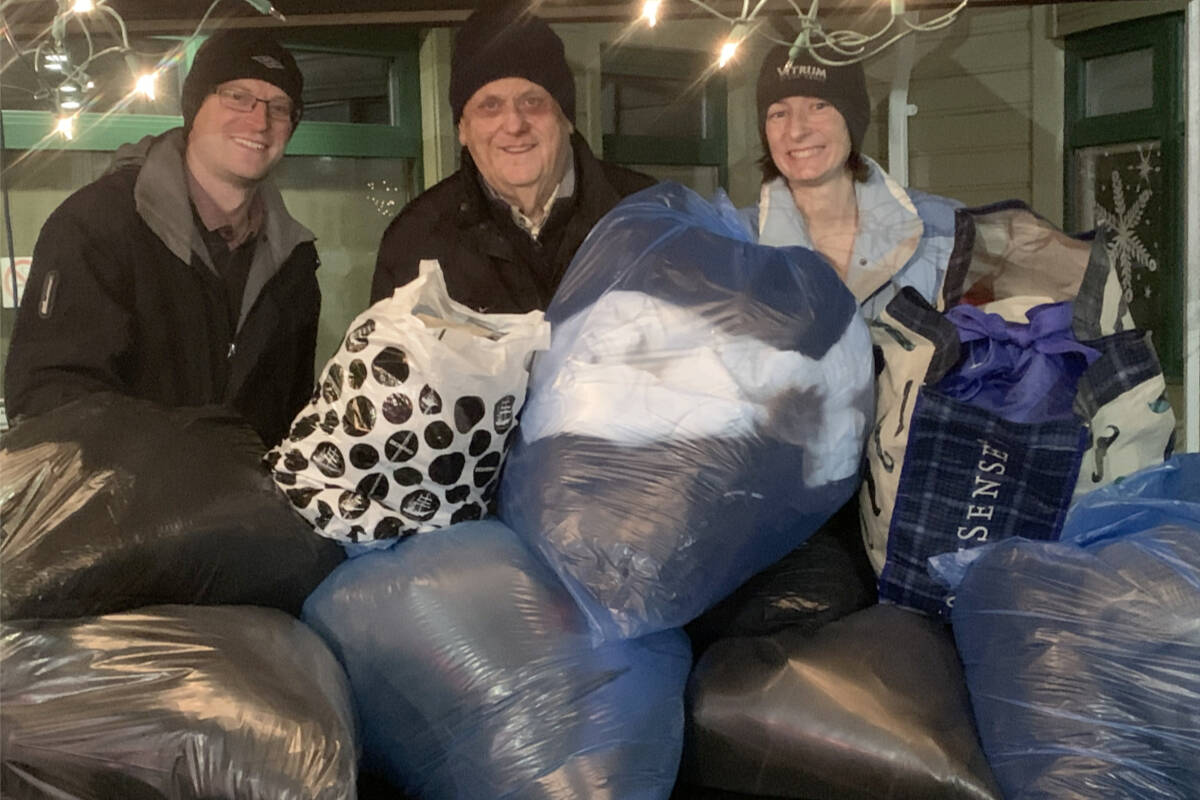 A recent clothing drive held by one of the local Rotary Clubs brought in an SUV full of clothing that was given to Gateway of Hope for distribution to those in need. (Special to Langley Advance Times)

Christmas joy at the push of a button