The latest edition of the firefighter calendar is on the streets and it will make an ideal last-minute gift for someone special this Christmas – without getting anyone in hot water.

Township of Langley firefighters are not showing off their bulging muscles and toned abs for these photos – like the more traditional firefighter calendar might.

Instead, the men and women with the Langley Township fire department are fully clothed for these photographs, and they’re posed with some of their favourite furry-tailed friends.

Several years ago now, the Township of Langley Firefighters’ Charitable Society put a spin on the typical firefighter calendars. They started partnering with the Langley Animal Protection Society to create and sell fundraising calendars with one key difference, as mentioned, the inclusion of animals.

At first, it was just shelter animals pictured with the firefighters. Then, as the years progressed, some of the pictures featured firefighters with their own pets. Now, it’s a mix, with at least one of the animals featured in each year’s calendar belongs to a LAPS donor, who purchases the spot with a large donation during the annual animal shelter gala.

This is Stefan Jones’ first year being involved with the calendar, just four years into his career as a firefighter, and 18 months in with the Township.

When he learned of the calendar fundraiser, and given his passion for portrait photography, the 27-year-old father of two jumped at the chance to be part of the giving-back project.

Not only did he organize and take all the photographs over two days of shooting, he also worked with Duolynx to design and print 800 copies, then arranged to find outlets around town where the calendars could be sold.

It was a whirlwind project, he admitted, noting he started in June and had to have the calendar off the presses in time for unveiling at the mayor’s gala in September. While he’s pleased with the outcome, and hopes the community enjoys it, he’s already planning next year’s.

Hoping to ramp up his efforts further, he wants to take pictures throughout the year, whether there’s snow on the ground or sunny skies overhead, he feels a mix will add to the project. He hopes to seek out a variety of different locations, and he also wants to see more types of pets – noting there’s only the one feline that made it in this year (the kitten on the cover), all the rest are dogs.

“I’d like to see more cats and maybe even a rabbit or something like that,” added Jones, who is on the back cover of this year’s calendar with his parents’ dog, Doug.

Having had a chance to get to know the team at LAPS during the calendar project, Jones and his fiance are contemplating adopting a kitten of their own from the shelter in the coming months. Jones, only partially joking, said maybe he and their new cat will be the star of next year’s firefighter calendar.

alendar going to LAPS, this year a portion of the proceeds will once again go to the firefighters’ charitable society to support many other community initiatives.

Jones said sales are going well, and he is hopeful to sell out of calendars this year. He noted, though they are in fewer stores this year, there have been more sales so far.

The calendars, which sell for $20 each, are available at Wendel’s Bookstore & Cafe in Fort Langley, Shopper’s Drug Mart in Murrayville, Otter Co-op in Otter, Dead Frog Brewing in Willoughby, and Langley Animal Protection Society in Aldergrove. 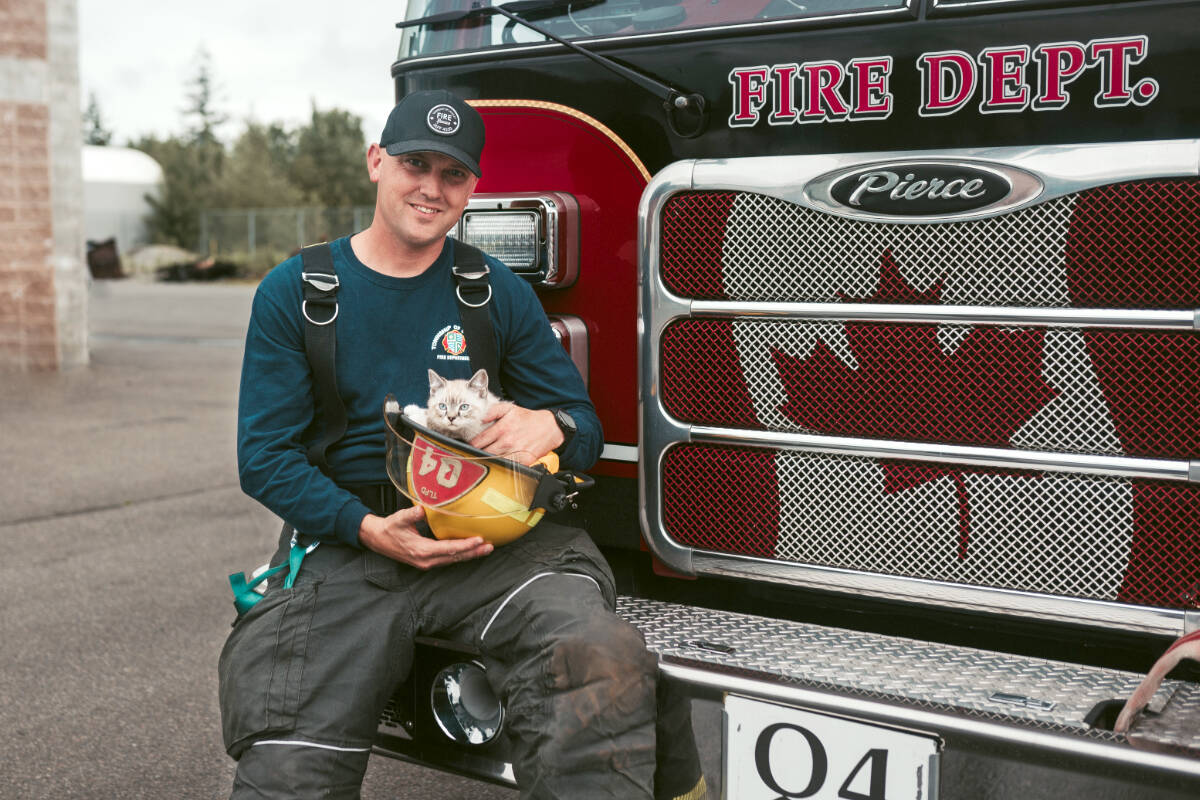 This year’s firefighter calendar only features one cat, this little kitten from LAPS. Next year firefighter photographer Stefan Jones hopes to have more cats and other pets. (Stefan Jones/Special to Langley Advance Times) 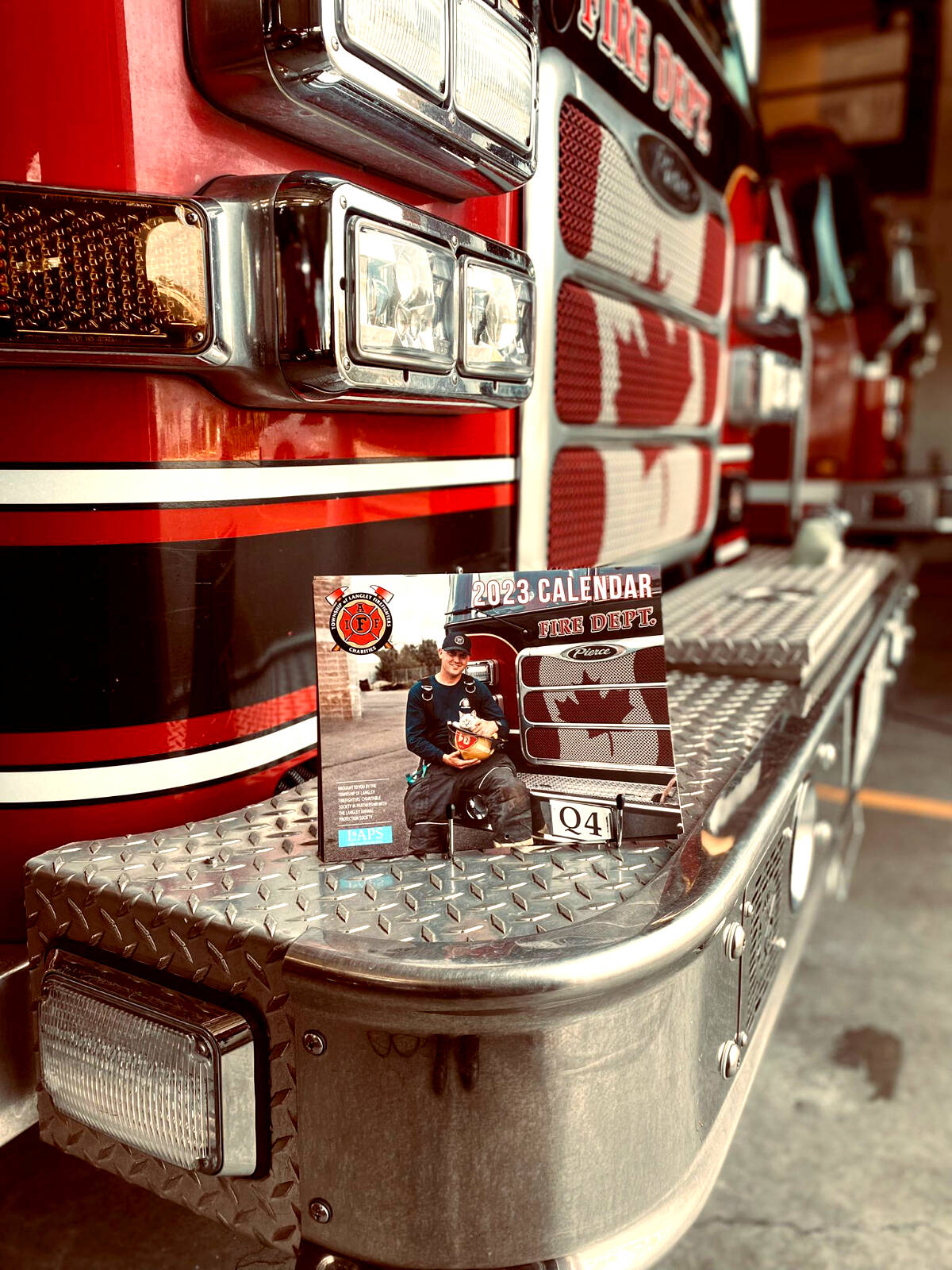 Calendars make the perfect gift idea, be it a stocking stuffer or a last-minute idea for a coworker or classmate. Well, Langley Township firefighters are one again selling a $20 firefighter and pet calendar, which will be raising money for the local animal shelter and other firefighter charities of choice. (Special to Langley Advance Times)