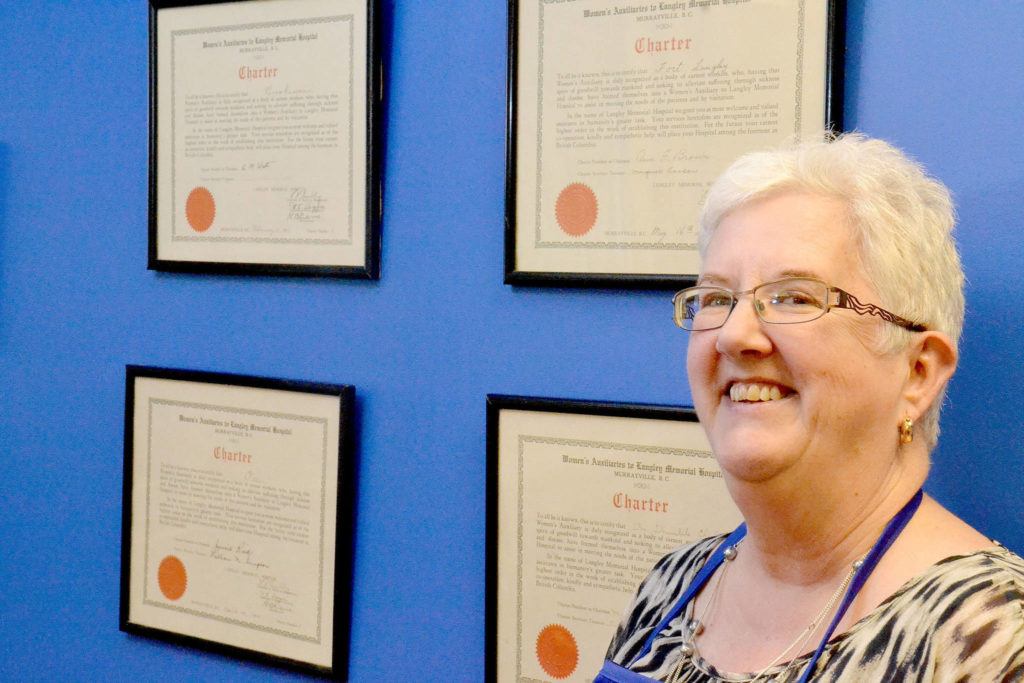 Diane Thornton is president of the Langley Memorial Hospital Auxiliary, which annually raises funds for LMH programs and equipment.

Volunteerism is in Diane Thornton’s blood.

It’s this natural inclination for helping out, and the ongoing effort of raising hundreds of thousands of dollars for equipment and programs at Langley’s ‘hospital on the hill,’ that drew Thornton to the role of president.

“I have a history of volunteering, and it just seemed to be a natural progression,” Thornton said. “I was on the executive. I was secretary to begin with (then) vice president. That’s usually how we progress. We bring people on, ideally as a director, and they’ll take an executive position and move up to president.”

She’s been the auxiliary’s president since 2011.

She added as her colleagues sitting around her chuckled, “Nobody else ran against me. Election is in quotation marks.”

Thornton’s 11-year history with the auxiliary continues a family tradition.

“My mother was a lifetime member of the auxiliary in Powell River,” Thornton said. “And I have two sisters who currently volunteer. So I guess it was instilled in us.”

When Thornton retired from her job as a customs broker, something she did for “30-plus years,” she was looking for something to do to keep her busy.

“I didn’t want to sit around all day and do nothing,” she said. “I knew what an auxiliary was, I knew what they did.”

As well, Thornton’s husband made it clear that he didn’t want her to volunteer with an animal welfare group.

It wasn’t that he didn’t like animals, but he knew how much of a soft spot his wife had for furry friends — and he didn’t want any new additions to the household.

“He said I couldn’t volunteer with the SPCA,” Thornton related, “because he figured I’d bring them all (animals) home. The thing is, you take things home from here (the auxiliary’s Penny Pincher thrift store), they’re not live.”

Thornton said she’s a lifer with the auxiliary.

“Some people volunteer for a short time and move on to something else, and there’s a few of us in a core group where we get sucked in and it’s a lifetime thing,” Thornton said. “You buy into what we’re doing.”

As auxiliary president, she has many duties.

“It’s the overseeing of the whole organization,” Thornton explained.

“I oversee the different programs that we have. We have the gift shop, information desk, Penny Pincher (thrift store that raises funds for the hospital). I volunteer (at Penny Pincher) because I like the hands-on contact. You oversee the whole operation.”

An ongoing challenge for the auxiliary is its public identity. Simply, Thornton pointed out, people don’t know what it does.

“A lot of people don’t know that we are all volunteers, and that we raise money for the hospital and health care in our community,” Thornton said.