Tiffany Desrosiers was so moved by the actions of Langley Memorial Hospital staff that she jumped at the chance to help with the recent hospital foundation fundraiser.

In fact, the Murrayville woman was appreciative of the chance to give back to the very hospital she credits with saving her life back just a few months earlier.

The 32-year-old pop-opera singer, who travels the world performing, shared her music and story with a 400-plus crowd at the foundation’s annual fundraising gala on June 1 at the Langley Events Centre.

“I had just experienced LMH’s care first hand for the delivery of my first baby,” Desrosiers said, explaining when the request came in to sing. “I can relate to the importance of urgency of care at LMH.”

Thank you to tonight's entertainment sponsor Lindsay Kenney LLP. Pictured is Langley's own @tiffanydesros, who shared her story of how the doctors and staff at Langley Memorial Hospital helped her after the birth of her daughter Isabella. pic.twitter.com/5PPsdkwYd5

The pop artist had tour dates lined up until 10 days prior to her due date, including a show in Nelson that required seeking special permission to fly.

“Would I do it again? No way, Jose,” the artist said. “Not worth the risk in hindsight.”

She recounted overhearing people in the Nelson audience saying: “I hope her water doesn’t break on stage.”

Nevertheless, the flight to the B.C. Interior and back went fine, and she went on to wrap up the tour with a show in Courtenay on Dec. 10, followed by a one-night stay over in Victoria.

Well, turns out she went into labour the next morning – four days earlier than expected.

“Labour was a piece of cake,” she said. “Totally not.”

After 68 hours of contractions that were all over the place – timing wise – and working through the early labour with her doula, she checked into the maternity ward with a fever.

The hospital obstetrician, recognizing she wanted to have a natural birth, laid out her options.

Desrosiers was told it could end easily and quickly with a cesarean, or they could wait a bit – wait for her water to break, and try to deliver the baby naturally. They waited.

“That’s where things got even crazier,” Desrosiers told the crowd. Her mother, younger sister, Isabella’s father, and her doula were in the room and in “lalaland” chatting and admiring the baby and rejoicing in her arrival, the new momma recounted. They were totally unaware things were going sideways. The first-time mother had hemorrhaged.

“Suddenly, I remember a blur of doctors and nurses scurrying around me, and the mask going over my nose and mouth,” she said.

Her uterus didn’t contract properly because she was so exhausted due to the lack of rest leading up and including several sleepless nights of contractions.

Two doctors and a team of other health care staff went into action.

They gave her three shots of drugs to stop the bleeding – where Desrosiers later learned that normally one shot would have sufficed.

She was on the brink of receiving a blood transfusion, and told if the third shot didn’t work, she would be rushed to the operating room – where she would have to undergo a hysterectomy.

“Everyone handled the stress very well among the chaos,” Desrosiers said, praising hospital staff for their professional and calm demeanour.

“I was told by my family doctor, later, that if we were living in the ’50s, I wouldn’t be here today,” Desrosiers said, reiterating her appreciation.

“I’m so grateful to the doctors, the nurses, and the staff in the maternity ward at Langley Memorial Hospital, for the exceptional care and skill they provided,” she said, “…and for literally saving my life.”

With a new and improved emergency department at LMH, she can only imagine the number of emergency scenarios – like hers – that will be helped.

“And moreover, how many more lives will be saved?” she said, dedicating a song, Because You Loved Me, to the LMH team.

Desrosiers had been a patient in LMH in past. As a youngster, growing up in Langley, she’d visited for an arm dislocated during gymnastics, and she’d been in a few times through the years for ear infections.

But she’d never experienced anything so serious as the birth of her baby girl or the subsequent hemorrhaging.

She couldn’t thank the team or the hospital enough, she said.

As a new mother, Desrosiers is still travelling for performances, but is also balancing time with her new daughter, noting she and Isabella were in Florida for a show when the baby was only eight weeks old, and more recently they were in West Virginia, Pensylvannia, and California performing.

There are a few shows scattered throughout the upcoming months, including a few Celine Dion tribute shows in the B.C. Interior during the fall, another couple of show in Regina in November, and a concert closer to home in Burnaby during early December. 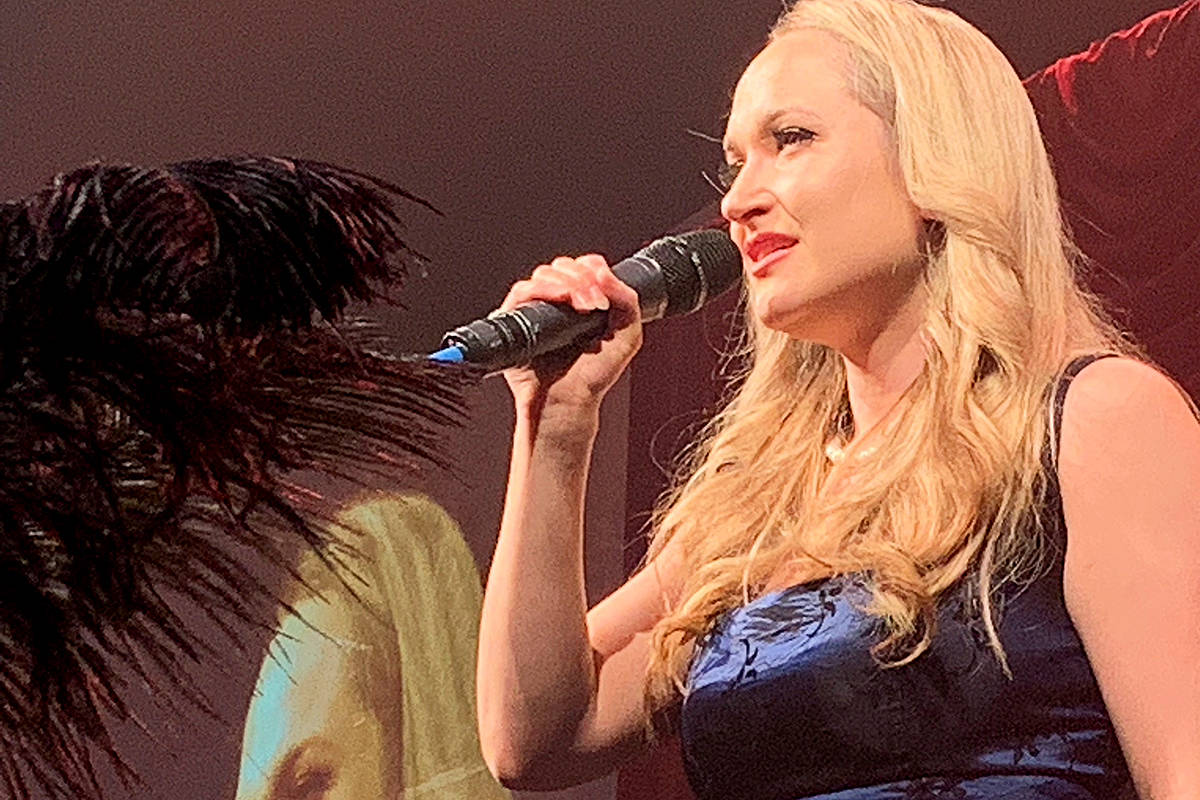 After 68 hours of contractions, Desrosiers was admitted to LMH to give birth to her baby. She then sang the hospital’s praises at the hospital gala on June 1. (Roxanne Hooper/Langley Advance Times)

VIDEO: Langley doc thanks donors for building ER for the future