Tessa is homeless after she and her family fled 100 Mile House due to the wildfires.

Sadly, following the evacuation, her family could no longer keep her, and relinquished custody to the Langley Animal Protection Society (LAPS), explained executive director Jayne Nelson.

“Her family was evacuated and were unable to find housing for themselves and the number of pets they had, so they were put in a tough position to have to find a home for [Tessa],” she elaborated.

While LAPS has not yet been called on in a big way to help with the wildfire evacuations, Nelson said the Aldergrove shelter is ready and prepared to pitch in.

“It is so tragic to see what is happening in our beautiful province,” Nelson said. “Our hearts go out to all of the people and animals who have been impacted by the fires.”

This past weekend, they donated a large quantity of food and various pet accessories to the relief efforts currently underway in Princeton. An Abbotsford woman, Brittany Ford, reached out via social media asking for help, and was “a little teary” when she showed up to find the LAPS team had pulled together a pickup literally loaded inside and out with donations.

“We had some extra food, crates, blankets, leashes, etc. that we were able to share,” Nelson said, not to mention 25 cases of canned cat food, about 300 pounds of dried dog and cat food, and another $1,000 worth Earth Options Pet Food contributed directly from the manufacturer.

In addition to donating to the cause, LAPS has taken custody of Tessa, a one-year-old female Rottweiler and Saint Bernard cross.

“She is young and good natured,” Nelson said. “She is available for adoption, but will need to complete her training and be spayed before she will be able to go to a new home.”

As for what other steps LAPS will take to help in the fire efforts, Nelson said her team will just wait to see where their help is needed most.

“We have fielded a few inquiries for others, looking for temporary housing,” Nelson said, adding that it is a busy time at the Patti Dale Animals Shelter and space is limited.

“But we will do whatever we can to provide assistance,” she added, noting arrangements could be made to help facilitate some of their animals or the evacuee animals in foster homes, if needed.

On their own time, Nelson and LAPS animal control officer Tina Jensen Fogt are heading up to the fire zones in the Interior this Thursday to lend a hand.

“We’re going wherever we’re most needed,” Nelson said, noting it’s been difficult – even for them – to get in touch with the right people.

They’re currently expecting to head to Kamloops, and likely be deployed from there, to offer assistance with the animals, whether that’s cleaning cages, taking dogs for walks, or simply offering some TLC, she explained.

“We’ll do whatever is needed. We just want to be helpful.”

Ahead of their two-day trip, the pair is currently collecting more donations of pet-related items.

It can be anything from canned and dry cat and dog food, to toys, beds, large crates, litter boxes and litter, animal shampoo, or even livestock feed.

“Everything we collect will get distributed to those in the most need,” Nelson assured.

Asked if they’re expecting to be returning with some animals, Nelson said she wouldn’t be surprised, but would just have to take it as it comes.

On the SPCA front

In the meantime, the BC SPCA has escalated its rescue efforts for animals affected by the wildfires.

“Our staff and volunteers have been very active in supporting emergency services in affected areas, but as the wildfires spread, we are escalating our involvement,” Lorie Chortyk, general manager of community relations for the BC SPCA, said Monday.

“The animal evacuation centre being operated by the Prince George Humane Society with the support of the SPCA is now full, so the BC SPCA has set up a second evacuation dog care site in a warehouse in Prince George, Chortyk said.

“There are currently 35 dogs in care, but the facility has the capacity to handle more incoming dogs.”

Dog owners will be referred to the SPCA-run centre by local Emergency Social Services personnel.

The BC SPCA has also deployed a number of special constables from its cruelty investigations department to a basecamp in Clearwater, where they will be providing support in rescuing animals trapped behind fire evacuation lines.

“In addition we have transferred more than 130 homeless animals in our care from SPCA shelters in the Cariboo region to our facilities in the Interior, the Lower Mainland, and Vancouver Island to free up space for temporary emergency sheltering for animals impacted by the fires,” Chortyk said.

In areas where evacuated families are seeking temporary shelter, the BC SPCA is also offering free spaces for kids in their week-long summer camps (as capacity allows).

“The situation and the needs are changing on a daily basis, but the BC SPCA is in regular contact with provincial and local ESS officials and our staff and volunteers are ready and willing to help however we can,” said Chortyk.

The BC SPCA has set up a special online emergency donation site to help animals affected by the wildfires.

For the larger animals

The fairgrounds in Cloverdale have also been set up to house displaced livestock, and those who have space and ability to help with larger animals, such as horses, cattle, and other livestock can also help. They are asked to register with the Horse Council of BC. 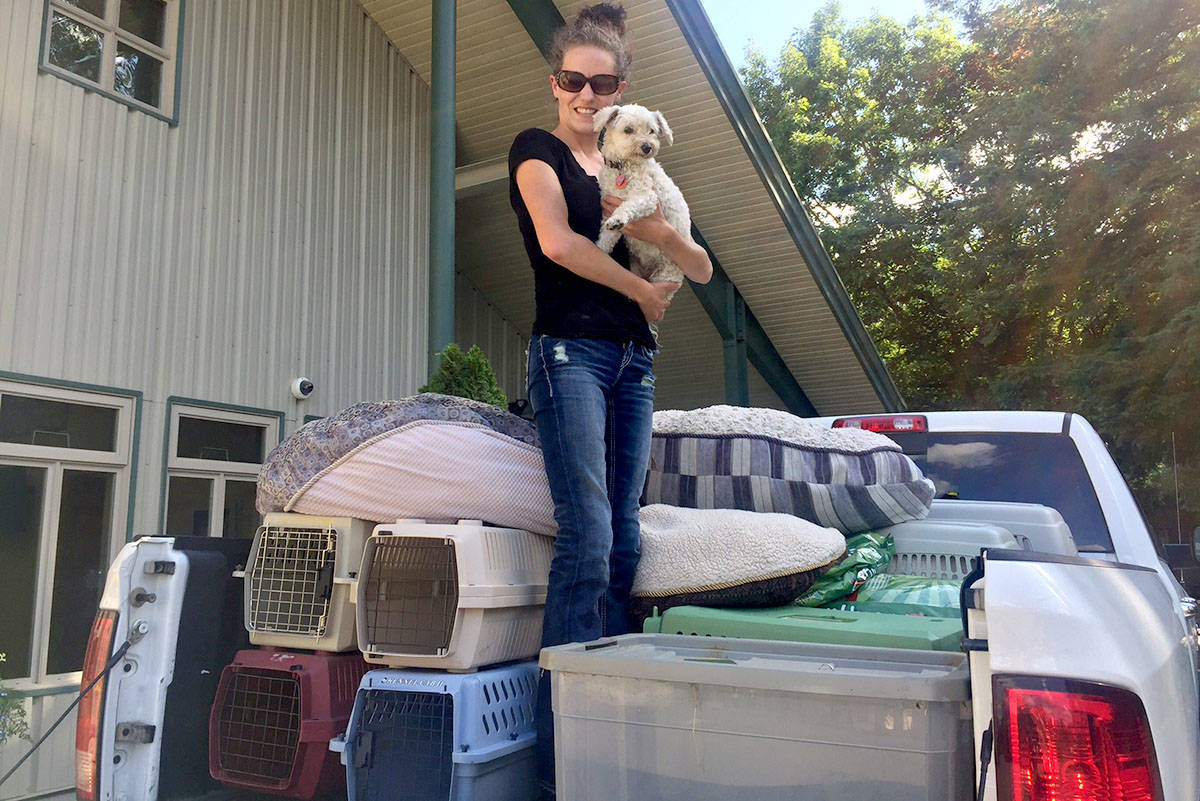 LAPS and its supporters have sent some much needed cat and dog food, blankets, beds, and crates up to Princeton through Abbotsford’s Brittany Ford. Now, the Langley shelter team is collecting more donations that will go up to the Interior with LAPS executive director Jayne Nelson and animal control officer Tina Jensen Fogt this Thursday. (SPECIAL TO THE LANGLEY ADVANCE) 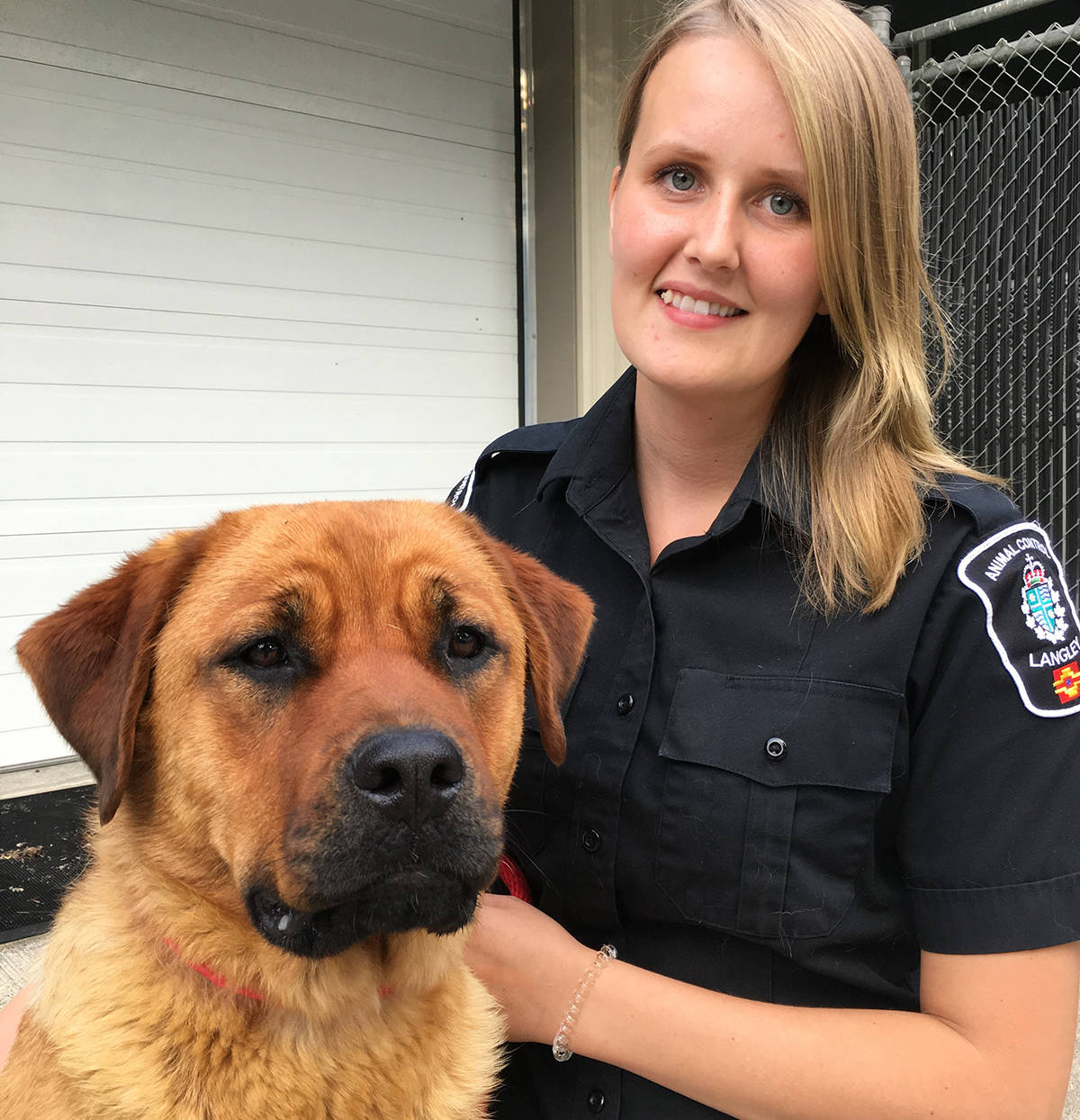 Animal control officer Tina Jensen Fogt gave some love and attention to Tessa, a 100 Mile House evacuee who has been surrendered to LAPS and is up for adoption. (LNEYA ISHMAIL/LAPS)

VIDEO: A torrent of toadlets through Langley yard