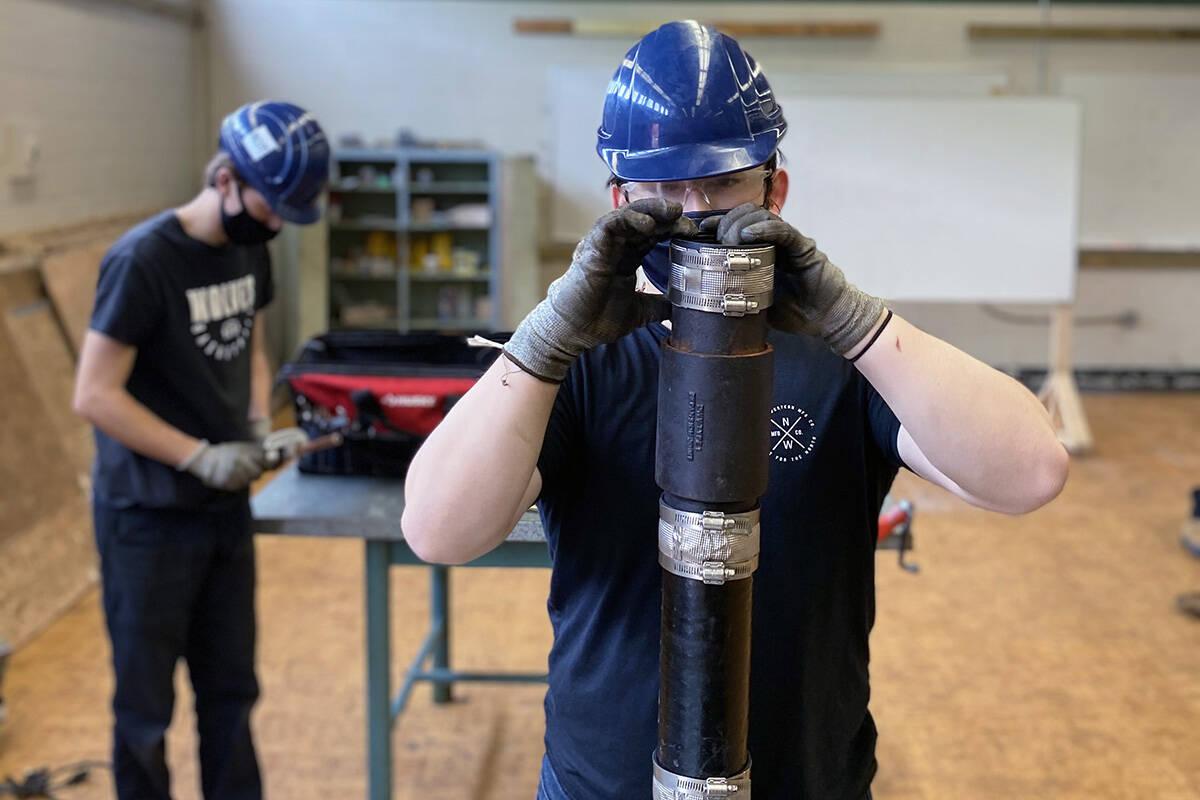 According to B.C.’s Labour Market Outlook, the job sector is both rapidly expanding but experiencing labour shortage at the same time.

Through its annual Youth Train in Trades program, the district invites Grade 11 and 12 students get trained in a field of their choice starting in high school and is tuition-free.

George Kozlovic, district principal of instructional services, shared that they do not accept every student who applies, and a “rigorous” application and interview process is involved. He further added that the district aims to receive 150 applications this year and enroll 85 students for the next intake.

“Our ultimate, long-term goal is to receive more applications per program than we have spaces and then to be able to have all programs be at full capacity,” said Kozlovic, who oversees the Career Education Department.

Each year the district has space to enroll around 100 students in total for all programs, but it has never has enough numbers use up all the capacity.

While the applications for this year are closed as students apply a year in advance, the district is accepting applications for next year. The deadline is April 1 and there’s no addition tuition fees to take the programs.

Students will be required to pay for tools and textbooks; however, Kozlovic said that the district’s bursary programs are available for those in financial need. Langley School District also works with ACCESS, a non-profit organization, to assist Aboriginal students entering these programs.

PROVINCIAL INITIATIVE CAME TO LANGLEY IN 2000

Funded and supported by the Ministry of Education and the Industry Training Authority, Youth Train in Trades is a provincial initiative, which first saw Langley’s participation in 2000 with a horticulture program. After the first program’s success, the district expanded to run more trade workshops with KPU where Langley students studied alongside adults and youth from various school districts.

“Our first standalone Youth Train in Trades Program was piping and plumbing at Langley Secondary School around 2005/06 and then we added automotive, carpentry and hairstylist at Aldergrove Community Secondary School,” Kozlovic explained

Electrical and professional cooking were added to the options.

According to Kozlovic, each program offered exciting and engaging sessions, kept students in school and provided avenues to additional post-secondary training and future employment.

RELATED: Back to school plans announced by Langley district

Emphasizing the importance of trade skills in today’s world, Kozlovic said that there is a huge shortage and an urgent need for tradespeople in many industries.

“One only needs to drive around Langley and look at all of the construction everywhere to realize how crucial trades are to our economy,” he said. “As well, we all rely on tradespeople in our everyday lives whether it is when our electrical outlets stop working, we have a leak in our house, we want to start a renovation, we need a haircut or we want to go out for a nice meal in a restaurant. We are all somewhat reliant on tradespeople in our lives, and we need to ensure that we have an ongoing labour supply to fill the demand that is out there.”

He encouraged families to consider a trades program as a viable alternative to a traditional university degree, while still being a challenge.

“What many students and parents do not realize is that becoming an apprentice also requires four-years, no different than a university degree,” he said. “The difference is that when a student is studying to become an apprentice, they actually spend 10 months of their year in the field working (and making money) and only two months of the year in the classroom.”

Kozlovic shared that the district has hired qualified instructors who have earned Red Seal trades certificates in their respective fields. According to the government of Canada, Red Seal trades are designated trades governed by regulations under the Provincial and Territorial Apprenticeship Acts.

Applications for the 2022-23 Youth Train in Trades program are due on April 1, and interviews will take place before the end of the school year.

According to Canadian Apprenticeship Forum’s 2021 report, automotive service technicians, boilermakers, bricklayers, and carpenters are in high demand in B.C. There are more than 300 designated trades in Canada with 55 offering a Red Seal trade designation, as per Employment and Social Development Canada.

The government also released data on the number of jobs each trade is expected to create from 2021-25, ranking carpentry at the top with 17,146 jobs. The government expects various industries across the nation to hire 16,362 cooks, 14,299 hairstylists, 10,735 auto service technicians, and 10,032 welders in the coming years.

To learn about the additional resources available for those interested in trade-related work, people can visit the Government of Canada website. To apply for the Youth Train in Trades program, Langley students can contact their school’s career advisors or fill up a contact form at Langley School district’s website. Alternatively, people can phone the district at 778-736-0710 or email at careered@sd35.bc.ca.