Coghlan Fundamental Elementary teacher Kristina Laven was impressed that her Grade 6/7 class wanted to do something to make refugees new to the community feel welcome and figured their toonie drive would hopefully bring in a modest amount.

The students had other ideas.

“Our initial goal was to raise about $450 (around $2 per student in the school) but after our first day of collecting, we had already exceeded our goal,” she said.

“The kids were totally shocked and excited to see how much they had raised. It was thanks to the whole Coghlan Fundamental Community that we were able to raise over $1,500 – such an accomplishment.”

Her class of 28 students approached the campaign with the precision of a military exercise.

It all started with a novel study of Alan Gratz’s book Refugee which traces the tale journeys of three refugees during different eras and from different cultures, people escaping war, famine, politics and other hazards.

It’s a historical fiction novel that follows the storyline of 12-year-old refugees. One was a German Jewish boy escaping Nazi Germany on the MS St. Louis to Cuba in the 1940s, the second a Cuban girl travelling from Cuba to Miami on a raft in 1994, and the third, a Syrian boy travelling from Syria to Germany in 2016. At the end of the book, many of the refugees talked about the positive impact of people in their new countries welcoming them with open arms, offering, housing, food, and more.

“The students absolutely loved the book, but it was also pretty heavy,” Laven said.

“I wanted to show them that even though there are so many of these sad stories, it doesn’t mean they, too, can’t be the ones that can help out and bring a smile to refugees.”

Then the class had a presentation from Langley Community Services Society settlement worker Miggy Ferrera on coming to a new land as a refugee and what happens in their own community.

“Miggy from LCSS was amazing throughout every step of the process, and I look forward to continuing working with the organization for fundraising and community-based projects,” Laven said.

The fundraiser was a class initiative advertised to the whole school of about 220 students and was completely student-run. Laven helped them organize into sub-committees for marketing, communications, shopping, accounting, and logistics.

“Students advertised the fundraiser as a toonie drive to the entire school and made it a class competition to entice everyone to donate,” Laven explained.

“The class that raised the most amount of money won a big candy bucket. We ran the fundraiser for just over a week and collected the funds from the classes every one to two days. From the get-go we were shocked to see that students were donating way more than just toonies. We had $100, $50, $20, $10, and $5 bills in the mix.”

Laven said the topic can be ‘heavy’ and difficult to learn about.

“With this initiative, my hope was that with all of the hard things going on in the world right now, the students would be able to realize that they are not too young to make a difference. It can start small in their local community and then hopefully get them fired up to do more on a grander scale,” she said.

The students recently met with Ferrera, who worked with the school throughout this initiative, to present the donations and items specially selected for a particular family new to the community.

“This is my first year at the school, and I am in awe of how involved and giving our families are – this fundraiser is a perfect example of that,” Laven said.

“Kids can impress us in the most beautiful ways, they are so interested in the world around us, especially politically. The more opportunity they have to talk about the world around them and make a difference, the more they will continue to show us how capable they are.”

Ferrera said he was impressed by the student’s initiative. He had done an initial presentation and was surprised to be contacted by Laven about the students’ desire to hold a fundraiser.

“I felt excited about the opportunity,” Ferrera said.

“Kristina initially reached out to our organization to talk about how her class was reading a novel about refugees and were learning how to build empathy towards others. Her class wanted to make an impact to their local community, so we collaborated on this campaign by connecting them with one of our newcomer refugee families.”

He selected a family of four young adults who had arrived here back in March 2022.

“I gave the family their gifts last Friday, May 6,” he said. “They were greatly appreciative of the gifts and even wrote a thank-you card to the class. They mentioned that they look forward to shopping at the local mall and use the gift cards that they received from the welcome package.”

The basket included a welcome letter from the class.

“The family felt welcomed to their new community and emphasized that Langley is full of kind-hearted people,” Ferrera said. 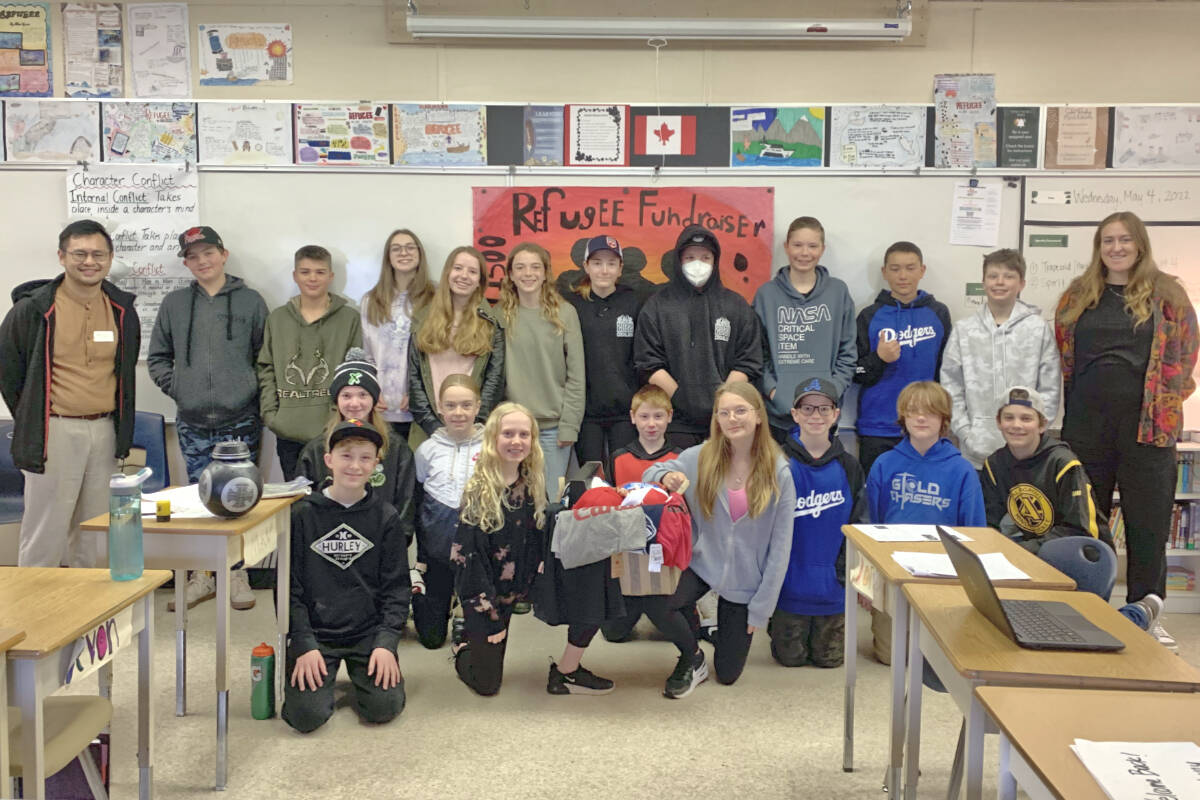 Kristina Laven’s Grade 6/7 class at Coghlan Fundamental Elementary, after studying a book about refugee children, held a fundraiser to provide a welcome basket for a refugee family new to the community. (Coghlan/Special to the Langley Advance Times)