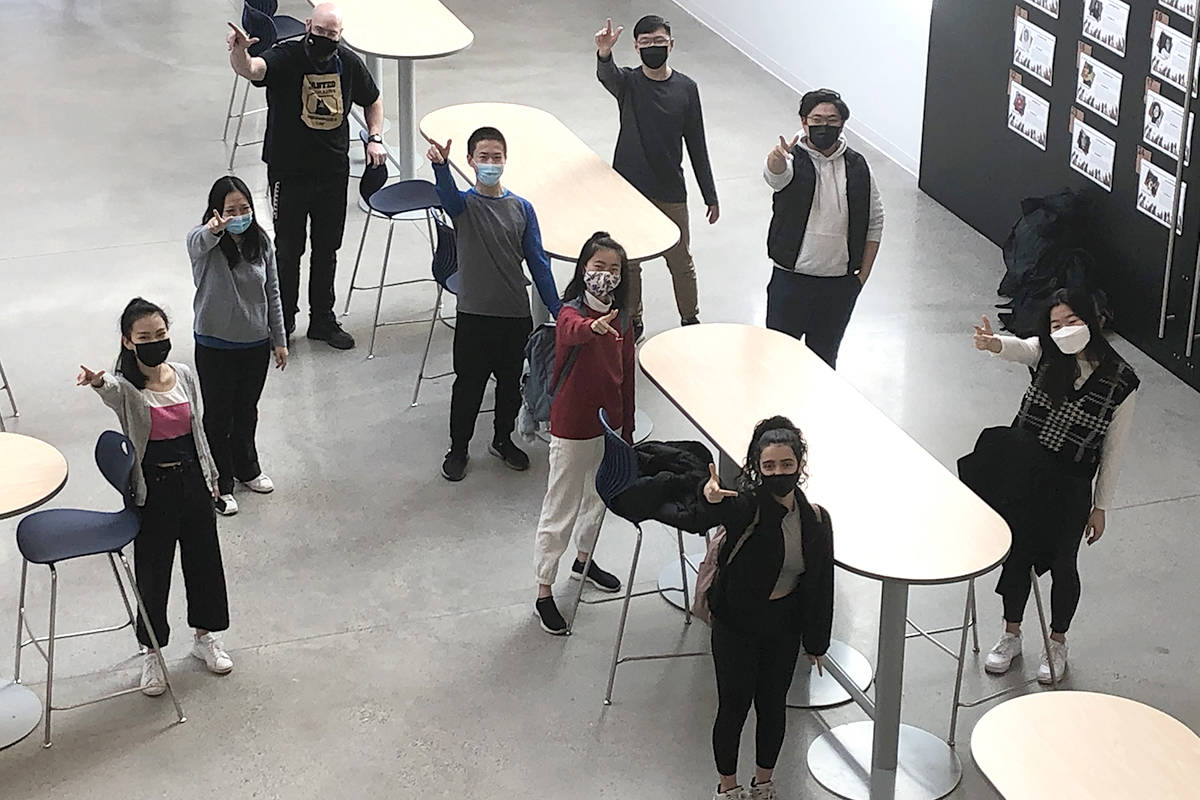 These students from R.E. Mountain alongside teacher Mr. Klassen (top left) were declared the winners of the 2021 UBC Physics Olympics, held virtually on March 6, 2021. The group is illustrating the right-hand rule, using their hands to represent the x,y,z directions. (Setare Maleki/Special to Langley Advance Times) 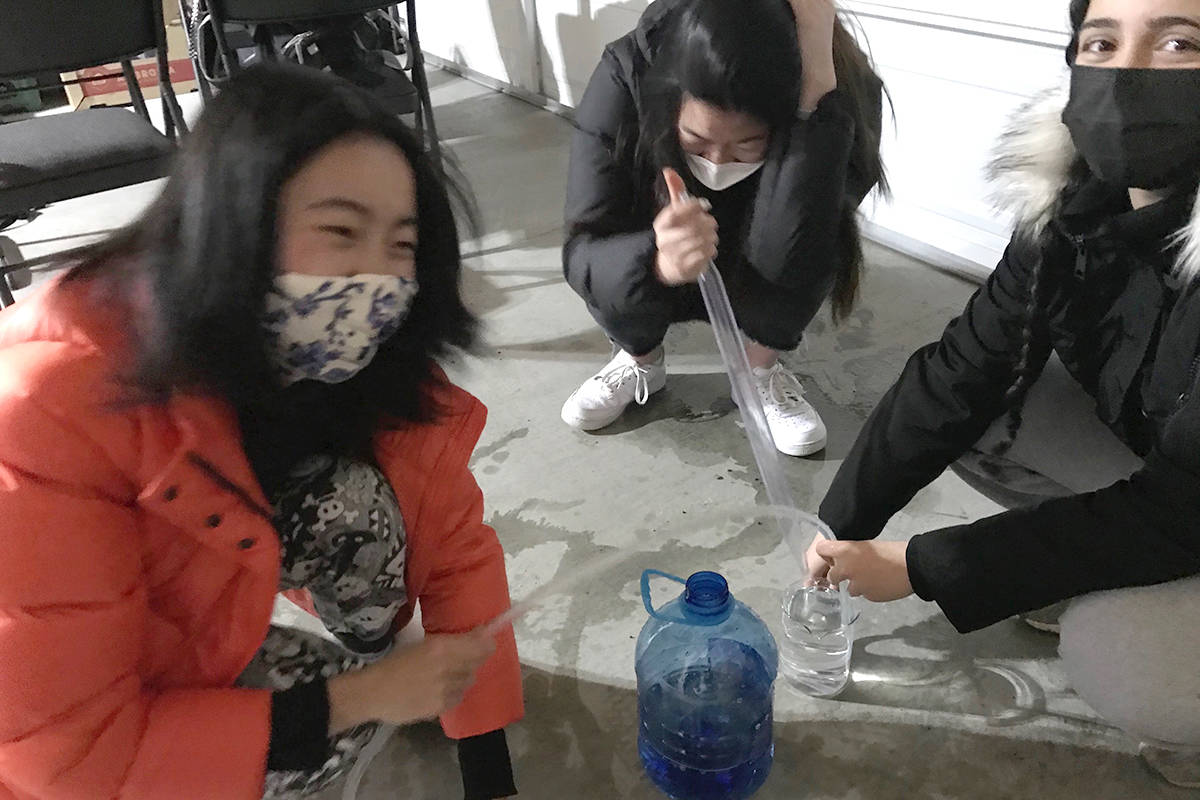 R.E. Mountain Secondary students Olivia Xu, Katherine Kim and Setare Maleki attempting to complete a gravity experiment with water, but caught themselves in a laugh after spilling the liquid. The Langley team placed first at the 2021 UBC Physics Olympics. (Setare Maleki/Special to Langley Advance Times) 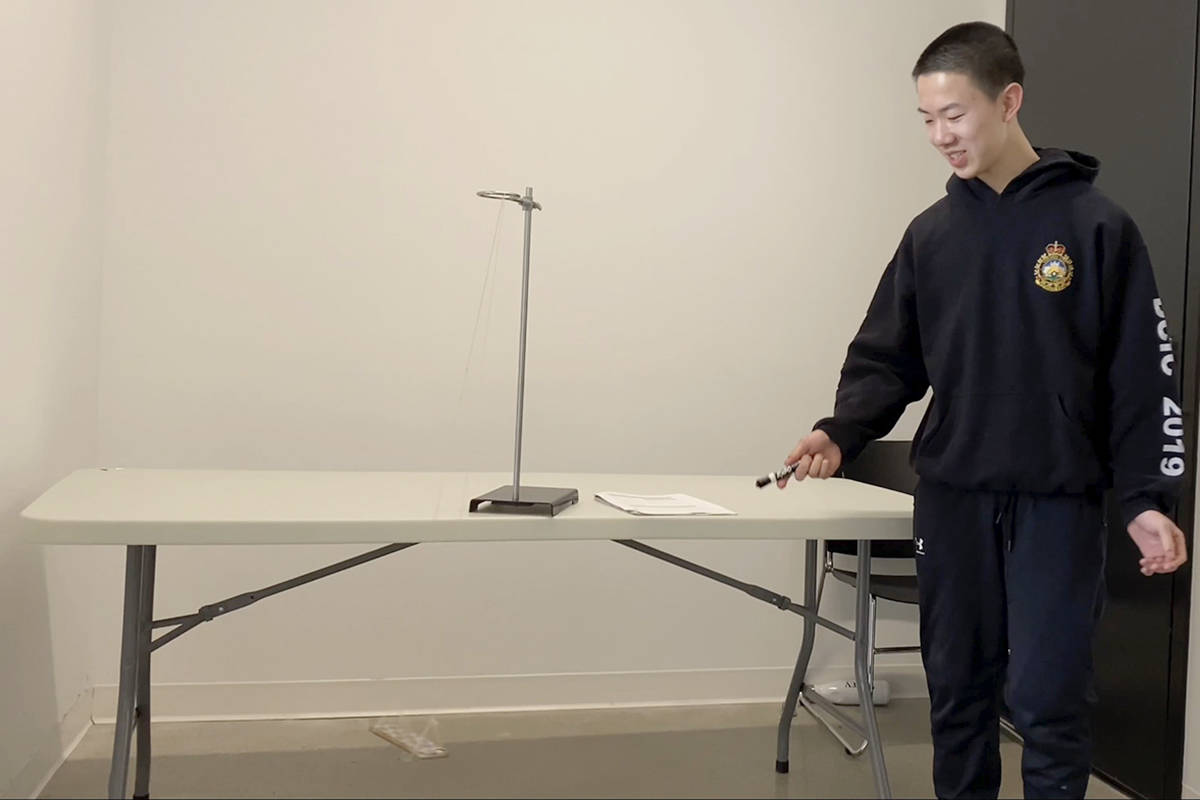 At the end of what organizers of the one of the oldest and largest physics competitions in North America called a close contest – a victor emerged, a team of students from R.E. Mountain Secondary school were declared the winners of the 2021 UBC Physics Olympics.

The annual high school competition hosted by the Vancouver-based university attracts hundreds of students from across the province. Competing in teams, the students are tasked to complete six hands-on events, of which two are pre-built by the students before the competition.

“We started off with no expectations for ourselves, but then as soon as we won we were all so surprised and we’re really proud of what we accomplished together,” said Katherine Kim, 18, a Grade 12 student on the R.E. Mountain team.

Teammate Olivia Xu, 18, noted the group’s success was a realization that they had something to offer that no one else could.

“All of us know what other people didn’t know; I think it’s a collective success,” she said.

This year’s event, held virtually for the first time, saw more than 400 high school students and teachers across the Lower Mainland and Vancouver Island participate on March 6.

The R.E. Mountain team was comprised of eight creatives from Grade 11 and 12. Four of the students will not be returning to defend their title next year as they move onto post-secondary education – one of the those students is 18-year-old Setare Maleki, who has a message to those who come after her.

“Physics may sound intimating,” she said. “[But] definitely try physics in high school, this is your time to mess up and learn.”

It’s been a challenging year for Grade 12 students who will mark a close to their high school years amid a pandemic, a sentiment that wasn’t lost on Setare. She said she was grateful to have shared this experience with her friends.

“This year felt so rushed, it was like we didn’t get to spend enough time together and this was such a good opportunity for us to bond,” she said.

The senior students have big career aspirations for life after high school. They haven’t decided yet, but are considering studying applied science, engineering or medicine.

The R.E. Mountain team was made up of Grade 12 students Setare Maleki, Katherine Kim, Olivia Xu, and David Guo, as well as junior members Coco Zhang, Isabelle Han, Eric Chen, and Ricky Ge, who will be carrying the team next year.