Locally created anti-bullying hoodies are selling as fast as a local father/daughter team can get them in stock.

Raya Crone, who turns 16 this summer, came up with the idea of the pink hoodies that say Bully This!. Her father, Steve, owner of Big2 Sports apparel and equipment, jumped on board to help her create the fundraising campaign.

The first run of 100 shirts sold out with a couple of days and Half of the second order are already sold or spoken for, Steve said.

“I was hoping for a positive reaction, but I didn’t expect them to take off as much as they have so far,” Raya told the Langley Advance Times. “I’ve always wanted to make a difference and the support from everybody in my community is making it happen. All the positive feedback and growth after a single week has left me speechless.”

The R.E. Mountain Secondary student choose hoodies as a piece of clothing everyone can wear. With minimal promotion, other than buyers posting to her Instagram page Bully This!, the apparel has become a hot fashion item thanks to its message.

“I am hoping that we can continue to raise money for as long as possible,” the 15-year-old said. “As long as I can make a difference for someone, I just always want other kids to know that no one deserves to suffer alone.”

The family has faced its own bullying issues with Raya the subject of vicious gossip and a close friend having to leave the school district due to online bullying.

The proceeds from the hoodie sales will be donated to a cause that supports anti-bullying. Find out more on the Instagram page Bully This! Project.

The campaign has given her something to do during the COVID-19 pandemic in addition to taking a part-time job at a local grocery store.

“Well for me it’s tough not being able to see my friends,” she said. “The softball season that I trained for all winter is on hold.”

The global pandemic has impacted the home-based apparel company. (Steve has also been a steelworker at Russel Metals since 2004.)

“Something comes along that shuts ball season down, as you can imagine, it pretty much brings all business to a halt,” Steve explained. “Financially it’s definitely hurt the business for the 2020 season. I’m sure that a lot of people and businesses are going through the same thing. I think that’s why it was really an immediate, no brainer to support Raya on her cause. I think it’s a great time for the community to wrap itself around a positive topic like this.”

And it’s not just family or friends buying. A woman hunted up where to get the pink apparel to make a purchase after seeing a stranger in the Bully This! hoodie. A man wants to order several for family in Alberta. Then came the virtual fashion show that can be seen on Instagram.

“People started firing us pictures of them in the hoodies,” the 46-year-old father said.

The hoodie campaign sprang from a discussion about the future of the customized uniform and apparel business. Steve was asked about his succession planning for this business in the age of the pandemic. Should something happen to him, what would happen to the business? The solution was to make a family member a shareholder who would then inherit the business. Raya, who has been involved in the business doing quality control, order checking, proofing and more, was named a shareholder.

Steve took it a step farther and asked Raya what she would do with the business if she were in charge.

“Hey big boss lady, here’s an idea, and as a business owner what would you like,” he said to her.

He admits he expected a typical answer from a teen – a request for money or a car.

“I was really caught off guard that this as the direction she wanted to go in,” said her dad.

In addition to the hoodie campaign, Raya is an active athlete who also does volunteer work.

“I do love sports,” Raya said. “Softball has been my life since I could fit a ball in my hands. I play soccer and club volleyball as well. This upcoming school year, in the fall, I’ve been accepted into the Yale Softball Academy and am very excited about that. My school volleyball team had a lot of success last year, but I am excited for what the future holds.” 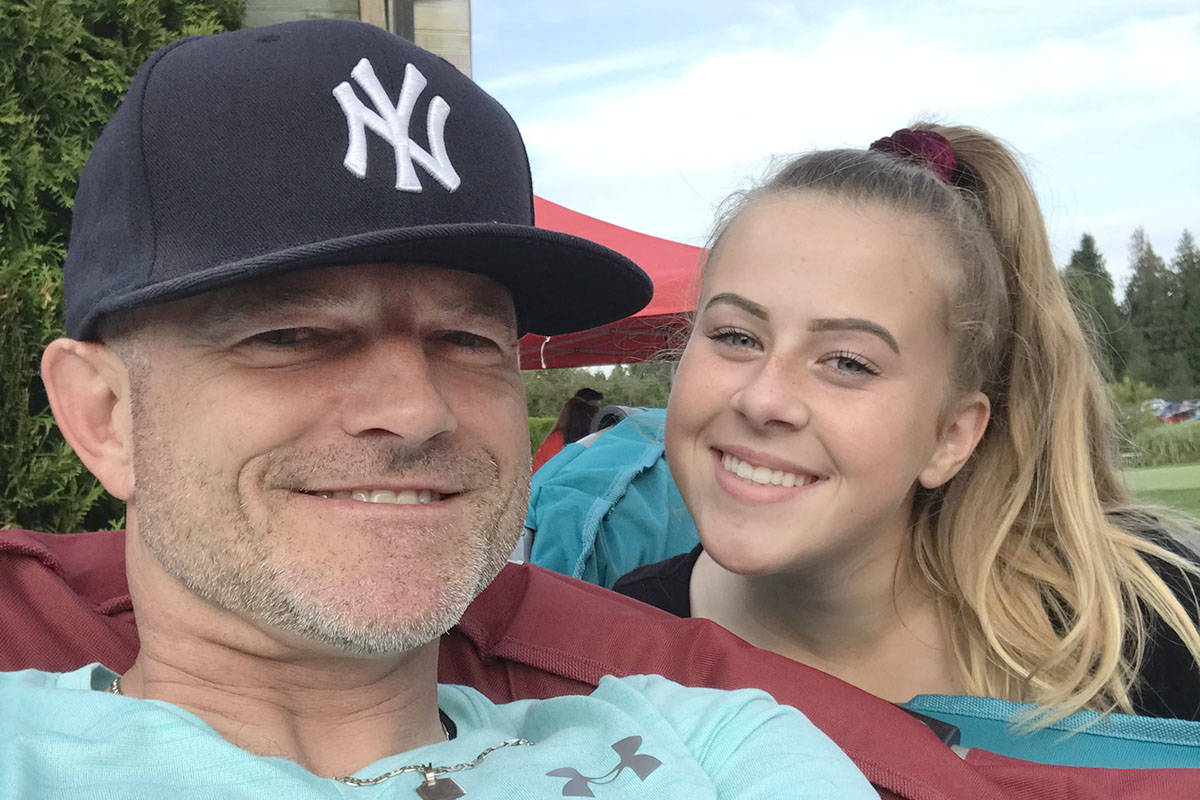 Steve Crone is proud of his daughter, Raya, who came up with the idea for an anti-bullying hoodie campaign that is taking off. (Crone family photo/Special to the Langley Advance Times)

Kaden Van Buren started at midnight on Saturday. By 3 p.m. he had completed the trek 19 times.

The man, 75, is accused of assaulting teenage boys he met through Coquitlam-area churches