Langley war hero Joseph Odin was remembered as a gentle, unassuming man and beloved husband and father at a celebration of his life.

About 50 people, including children, grandchildren and great-grandchildren, gathered Jan. 26 at the Spencer Green clubhouse in Langley to remember Odin, who passed away at the age of 96.

“He never hurt anybody.”

Son Doug said his father was the kind of parent who wouldn’t tell a son it was silly to think about attaching a sail to a canoe, instead letting them work it out for themselves.

“Dad taught us how to succeed by allowing us to fail,” Doug said.

When Odin was forced to punish his daughter for some childish transgression, Joanne remembers him coming by later to reassure her that “daddy doesn’t hold a grudge.”

Her mother and father used to say that that the secret to a happy relationship was “never go to bed angry and always have clean socks,” Joanne said.

Odin received the distinguished service award for his efforts in the navy during the Second World War.

In 2017, he was awarded the French Legion of Honour medal at a ceremony in Langley for manning a landing craft on D-Day at Juno Beach.

At that event, his son Wayne recounted one story his father told him about the day.

“The ship did strike a mine in the water, causing the stern of the ship to lift out of the water. [Suffering] no real damage to the ship, they returned for more troops,” Wayne said.

Immediately after the war, Odin returned back to New Westminster (where he was born in 1922), and went to work, first at Fraser Mills sawmill in Coquitlam and later as a tradesman for the New Westminster school district.

He retired from the school district, but Wayne recounted, how his father was too bored to stick with retirement and went back to work – again as a tradesman – for Kwantlen College for several more years.

He was married 73 years to Helen, whom he met during a double date shortly after he war.

“We just fell in love,” Helen said. “We just clicked.”

In all those years, there was only one unresolvable difference, she said.

“He didn’t dance and I liked to dance. I thought, no problem, I’ll teach him,” Helen said, laughing.

“Then I found out he had no sense of rhythm. He did’t know his left foot from his right.”

Odin is survived by his wife Helen, daughter Joanne and sons Wayne and Doug, as well as 14 grandchildren and 17 great-grandchildren.

“He was just a good man,” Helen said.

“”He was a good husband, and a great father, grandfather and great-grandfather.” 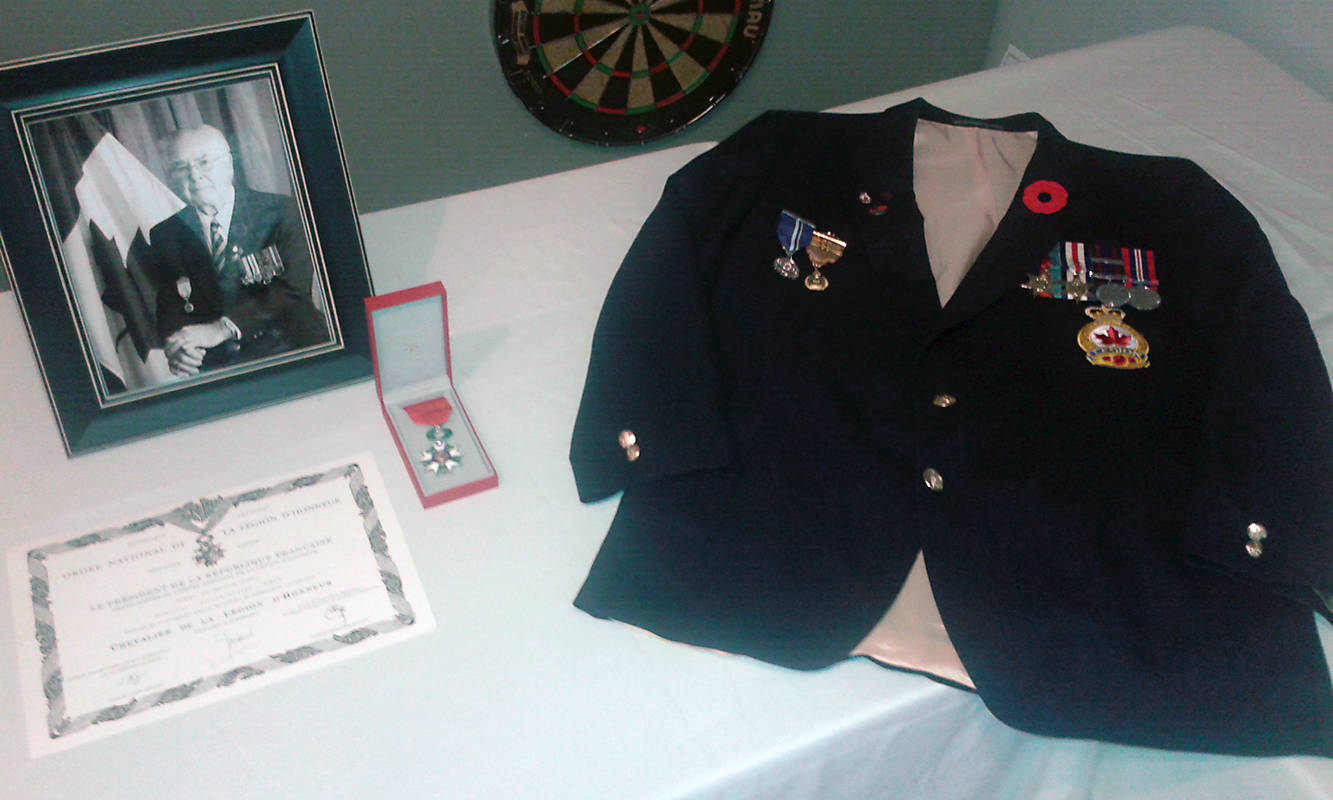 Joe Odin’s medals were on view at his celebration of life. Supplied