Esmée Estlin has packed a lot of living into her years.

And now she’s reached 100 years of age and has only recently started slowing down.

Esmée resumed downhill skiing at 86. She stopped at the age of 92, and only after her skiing companion was unable to join her anymore.

“When he passed away in 2016, Esmée moved to Langley,” said her daughter, Sally. “She chose the Avalon Gardens because it fit her lifestyle, close to the country and her family. She loves it there and continually tells her friends and family how much she enjoys life at the Avalon.”

“She was thrilled at the hundredth birthday celebration,” Sally said.

Esmée was born on Nov. 5, 1920, at the family home in Burnaby. The only girl among the siblings, she had four older brothers who helped raise her.

Esmée loved the outdoors, namely swimming in summer and skiing in winter.

She used to swim in Burrard Inlet on lunchhours with chums while in elementary school.

“She learned to ski in high school, using home-made skis, carrying the skis while going with friends by ferry from Burnaby across to North Vancouver and then bus to the bottom of Hollyburn Mountain, where they hiked up to the ski hill and its one rope tow,” her daughter said.

After graduation, she went to Sprott Shaw Business College with help from her brothers. One of them bought her a typewriter.

“Her first job was at a paint store under the Granville Street bridge, and she used her first paycheque to buy shoes for her mother,” Sally said.

In July 1941, she married Charlie Estlin in the front yard of her eldest brother’s front yard. Charlie was with the B.C. Police, stationed in Burnaby. They had two daughters, Sally and Judy.

Esmée’s mother also often lived with the family and was able to help with child care.

In 1948, the family moved to Victoria where Charlie had been transferred to a more senior position in the governmental office. But in 1949, the RCMP began taking over the BC Police. Charlie applied for and won a position as a Game Warden in Courtenay and the family moved again. Esmée went to work as a telephone operator and her mother watched the children.

In addition to the typical efforts of a wife of the era – a huge vegetable garden, hens, dogs, cats and a household, she sometimes helped tend to rescued wildlife.

“Bear cubs, fawns, and cougar cubs were sent to the game warden’s home when loggers or hunters accidentally killed the mothers. Esmée fed them all till they were transported to a zoo or wildlife farm,” Sally explained.

The family enjoyed water sports in the summer and skiing in winter.

Then came another move, off to Nelson where Charlie was now the Game Inspector for the East and West Kootenays. Esmée went to work as a secretary for Inland Gas, and bought a horse for 12-year-old Judy.

“One day Esmée while working, heard a knock at the back door of the InlandGas office, opened it to see a horse’s head! Her daughter had ridden a horse right downtown Nelson and popped in for a visit! Streets were quieter in those days,” Sally said.

After Charlie earned a private pilot’s licence, the family took to the skies.

In 1962, Charlie had been promoted to chief conservation officer for the province and they were back to Victoria again. Esmée went to work first in a ship-building office and then in a ship museum.

She learned to skate and joined a group of ladies who skated twice weekly in the mornings and swam in the afternoons. She continued gardening and skiing and flying and boating, and supervised an extension to their house to hold a family party after daughter Judy‘s wedding in 1966. She and Charlie flew her daughter Sally to join Sally’s new husband in Idaho. Then another big trip: She and Charlie joined another couple to fly their two small planes to Bermuda for a holiday, an exciting adventure that led the two couples to plan another one: fly their own planes to Expo 67 in Montreal, according to their daughter.

They didn’t just get around in the air. They also enjoyed boating in various vessels, upgrading to one with a diesel engine large enough for the family to sleep aboard.

“Esmée rented out their house for six weeks so they could live aboard the boat for six weeks each summer and travel the waters from Victoria to Desolation Sound,” Sally added.

Each February, Esmée would rent hotel rooms in Vernon for all of February so the family could do endless skiing at Silver Star. As a senior, her pass was free.

She and Charlie retired to Metchosin after she found a little house on 10 acres.

She was alone on the acreage but still had her large garden.

“She bought her own small chainsaw to continue using her wood stove to cook many meals,” Sally said. 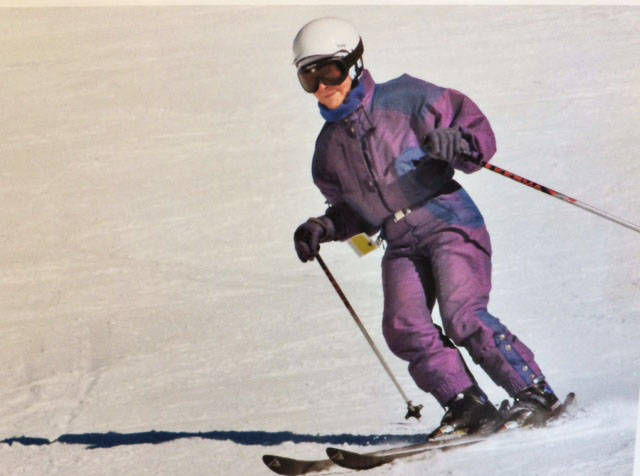 Esmée Estlin skied most of her life. She resumed skiing at 86 and only stopped at 92. She recently marked her 100th birthday. (Estlin family photo