Alice Fox’s keys often sit on the bookshelf in the entranceway of her Cloverdale apartment. But she’s lucky if she remembers them.

“I now have to hip check my door every day because I can’t take the keys,” she said.

As an RCMP officer, breaking and entering her own home isn’t physically taxing. But for someone who used to be able to remember impaired drivers she charged from two years before, it’s “a weird adjustment.”

A faulty memory, night sweats, hyper vigilance: all these are symptoms of post-traumatic stress disorder (PTSD) that Fox began facing after she went on a leave of absence from the RCMP in 2013. After dealing with alleged harassment from her supervisor in the Greater Vancouver Integrated Road Safety Unit, Fox faced struggles with the RCMP’s internal complaint process.

Fox said these issues exacerbated her existing PTSD — a claim she is making in her current lawsuit against her supervisor and the RCMP.

Related: ‘I’m willing to settle if there’s accountability. Not if there’s not’: Alice Fox on her lawsuit against the RCMP

For the first two years she was off work, however, Fox didn’t know she had PTSD.

“I was in what I would call a PTSD coma; I was in so much shock,” she said.

She would wake up covered in sweat — perimenopause, she thought at the time. Her arthritis started getting worse, something she now attributes to PTSD. Once, she leapt out of bed in the middle of the night, convinced there was someone in the room. She would stay up until three or four in the morning, calling anyone who could help solve her problems with the RCMP.

Fox’s struggle also put a strain on her relationship with her common-law partner.

“She couldn’t handle it,” Fox continued. “She literally said, ‘I can’t hear you talk about this anymore.’ But how can I stop talking about something that’s affecting my life, my livelihood and my future?”

When it ended, “it was sad. It was terrible for me,” Fox said. “Because here’s someone that I trust fully … the best thing that ever happened to me. And it’s gone and my job’s gone.

“I have never been so low.”

‘My life started to spiral’

Fox thinks the relationship ended in 2015, but she can’t remember. If it did, her relationship would have ended the same year she ran a marathon a week, and may have contributed to her decision to go to RCMP-mandated treatment for alcohol abuse.

According to psychologist and former RCMP member Jeff Morley, alcohol use is often coupled with PTSD. Morley runs a website on PTSD and sees many first responders, including Fox, come into his private practice for trauma-related issues.

Emotional numbing is a common symptom of PTSD, Morley said, and “the easiest way to do that is alcohol.”

“It could be other dugs, or even exercising to excess,” he continue. “But I think in the police culture … alcohol is far more common.”

Fox said she did not have an alcohol problem when she was on leave from the RCMP. The RCMP did not seem to agree. In April 2015, the RCMP sent Fox an email requesting that she get an independent assessment from an addiction specialist to see if she had an alcohol abuse problem that required treatment.

Related: ‘We don’t feel no more’: RCMP officer and Cloverdale resident Alice Fox on her struggle with PTSD

The email specifically cited an incident in October 2014, when Fox approached a man attempting to jump off the roof of a residence while drunk and was asked to leave by a member of the New Westminster police. That night, Fox claimed, she had three beers and several hard shots which, combined with medication she was taking, made her more intoxicated than expected.

The email also said that Fox’s psychologist had raised the issue of her drinking with the RCMP in April 2014.

Fox claims the RCMP called her on Christmas Eve to tell her she had to go to addiction treatment. Her immediate response was to back away.

“I bucked it. I thought they were crazy,” she said.

But then “my life started to spiral, you know,” she continued. “I didn’t understand what the hell was happening to me, and I was becoming despondent. I heard they had PTSD treatment and I’m like … ‘Just do it. Go through the motions. We don’t agree with everything they’re saying.’

Fox went through treatment for addiction and PTSD at Bellwood, the Toronto in-patient centre that’s part of the Edgewood Health Network. The experience, she said “was the biggest blessing of my life.”

“When you learn about your illness, then you have power over it. When you don’t know what’s happening to you, you can’t self regulate.”

Learning about the disorder has helped Fox manage some of the symptoms of her PTSD, and a subsequent program with Veterans’ Affairs was “the icing on the cake.”

RCMP Const. Sarah Brown, who went through the Veterans’ Affairs program with Fox, said it helped Fox calm down.

“Her anxiety I think is very similar to mine in the sense that you just get so worked up that you get this ball,” Brown held her hands up to her clavicle, “kind of right here in your chest. And it just didn’t seem to build up as much.”

Fox’s PTSD ‘not all that unique’

In many ways, Fox’s experience is a textbook example of post-traumatic stress disorder.

It started with what Morley calls primary and secondary trauma. Primary trauma are “those moments when we’re the ones in harm’s way,” Morley said. Secondary trauma is the “experience of confronting unfixable suffering,” like when Fox witnessed her partner get injured in the line of duty

Fox’s “experience as a police officer was probably not all that unique, meaning a lot of people go through that sort of stuff on the street,” Morley said. “But I think Alice for sure, her situation was definitely complicated by how it was handled.”

This is what Morely calls organizational stress, the added pressure of institutional processes, harassment or internal investigations.

Although it can be caused by a single incident, PTSD is more often a cumulative disorder with many incidents adding together to warrant a clinical diagnosis. This makes RCMP members and other first responders far more likely to have PTSD: although no comprehensive studies have been done on PTSD rates in the RCMP, Morley believes it is “more than double the general population.” Depending on the study, the general population has a PTSD rate of 5 to 7 per cent.

Because people experience PTSD in different ways, their treatment has to represent their individual experiences.

“There’s no one cure for PTSD,” Morley said. “Sometimes it’s about finding what fits for that person at that time.”

For Fox, the treatment program at Bellwood was a huge step forward in learning to deal with her PTSD symptoms. But she also finds help in breathing techniques, and spending time with her five animals.

“You know what she does?” Fox said about her wolf-husky pup Aspen. “She lays on me when I’m really sad. She’ll get on me and lick me all over … she’s the only thing that gets me out of the house, Jasper and her and Homer.”

Medication is also a common tool to help people deal with PTSD symptoms. In general, Morley said, people take common antidepressants, as well as anti-anxiety medication to help them deal with the adrenaline response they get when triggered.

They also often take sleep medication. “One of the hardest PTSD symptoms to treat is insomnia,” Morley said.

One of Fox’s medications was Prazosin, a medication that reduces high blood pressure by blocking the neurotransmitters that create a stress response. It can also be used to help PTSD patients deal with their persistent nightmares.

Fox used to have nightmares about facing the RCMP in court.

“I was actually in the nightmare,” she said about her experience after she began taking Prazosin, “and I’m like ‘You know what guys, I don’t get why you’re not getting this. And that’s okay. I’m just going to leave until you … figure this out.’

“And that was the last night of that nightmare.”

Fox’s PTSD isn’t cured but, Morley said, it could be.

“I don’t think anything’s going to erase our memories,” he said. “But it’s important that PTSD can be managed; it can be treated. It’s not easy. It’s a complicated situation to treat. But it is possible.”

This is the third in a series of articles on Alice Fox’s journey through the RCMP and her struggle with PTSD. 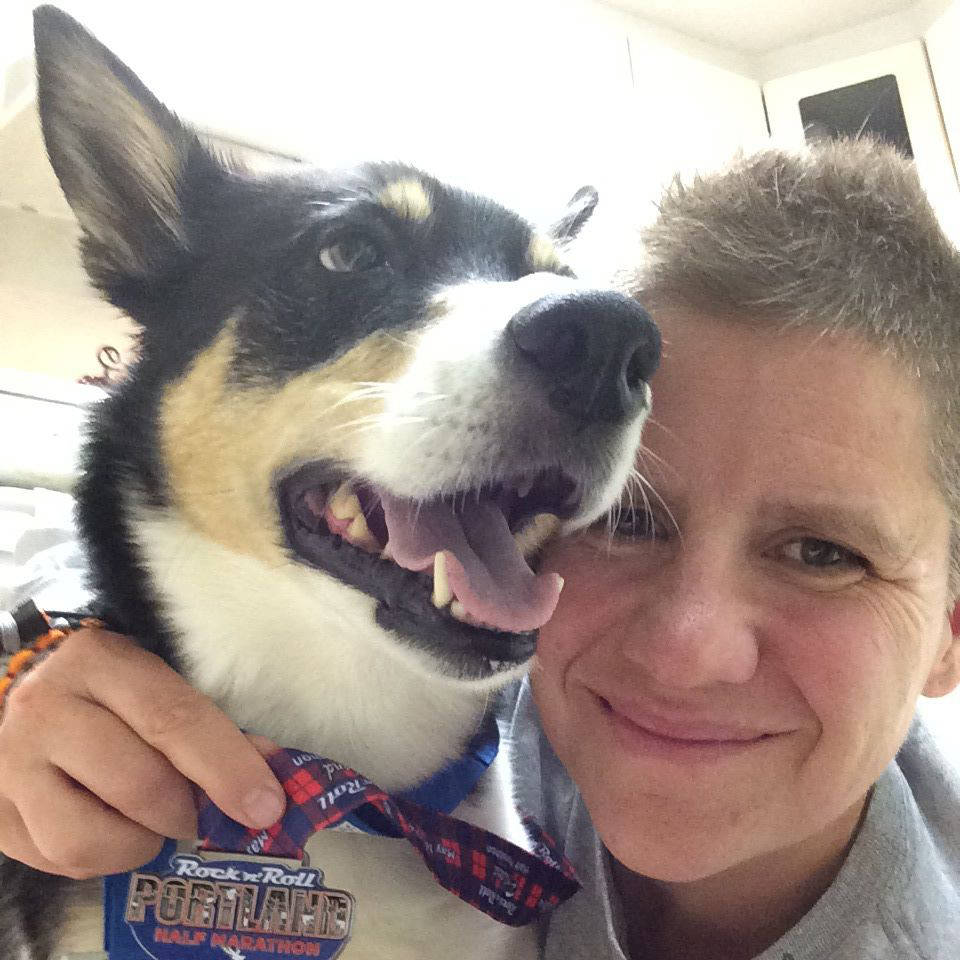 Alice Fox/Facebook
RCMP member Alice Fox with her dog Jasper, holding a medal from the Rock ‘n’ Roll Portalnd half marathon. To deal with her PTSD, Cloverdale resident Alice Fox ran a marathon a week in 2015. The medals are hanging up on her apartment wall.

UPDATE: According to a document from Bellwood Health Services received by Alice Fox in July 2017, Fox did not have an alcohol use disorder.