Dick Hooper spent his working life as an electrician, but he always made time to be involved in the community he loved.

Hooper was a member of two local Rotary clubs over the span of 44 years.

“He was a great guy and very welcoming,” said fellow Rotarian Rod Wainwright. “It’s satisfying to know that he lived a full and rewarding life. He will be missed.”

As a Rotarian, he was able to help both local causes and some far afield, including collecting medical supplies for impoverished areas of the world.

He took active role in all aspects of Rotary life, including his turn as club president and his tenure as a long-time volunteer with Rotary World Help Network. Hooper helped out because he enjoyed it but his efforts did not go unnoticed. Twice he was awarded Rotary’s coveted Paul Harris Fellowship.

“It was a pleasure to have known Dick, and a privilege to have spent some great times with him,” said May Barnard, a friend and fellow Rotarian. “I’ll keep those memories for the rest of my time.”

“It’s a real honour, and I’ll work hard to earn it,” Hooper commented at the awards ceremony.

At the time of the presentation, he explained that he’s made many good friends through the volunteer work he’s done and simply enjoys doing it. A longtime avid golfer, he was 75 at the time and had no plans to stop volunteering anytime soon – and he did not.

Locally, Hooper also devoted time to causes for which he cared, including spending more than a decade on the volunteer board of directors for the Langley Good Times Cruise-In. There was also Big Brothers Big Sisters, various Langley City parades, Community Days, Douglas Park Community School, the Salvation Army, and local Christmas bureau.

“Dick would never say no if you asked for help, he was always there if you needed anything or he ‘knew a guy’. I loved listening to his stories of his younger years and the history of Langley in those days,” said Riccardo Sestito, head of Cruise-In’s board. ”I met him the first year we started Cruise-In back in 1997, and I have been friends with him since. He will be dearly missed. I nicked named him ‘Uncle Junior’ from the Sopranos.”

When the Langley Christmas Bureau opened one year, thieves has been at work, stealing wire. There was no lighting and now way to turn on the heat. Hooper stepped forward to plan out the repairs, and sourced local contractors to help with donations and labour. When the bureau asked for the bill, Hooper said it would be a few lunches for the electricians.

“I will miss him so much… I will never forget him… I am just so grateful that I got to spend as much time with him as I did,” said Langley City Councillor Teri James.

She noted that he was one of the first people she met when she moved here in 2001. It wasn’t long after she joined the Downtown Langley Business Association and started volunteering that she hear his name.

“Need something? Dick Hooper has one. Need something fixed? Dick Hooper can do it. Need a hand at an event? Dick Hooper will help out. I started to cross paths with Dick at the many community events that he supported and we became fast friends. Anyone that knows Dick also knows that the Cruise-In was his passion, but they may not know of the countless times he helped me personally with building structures, putting up signs, moving around heavy stuff and he even came and put lights up for me in the office. This particular labour of love took him an entire day with his hands above his head feeding wires through the ceiling. I was in pain just watching him, but he did it because he wanted to help. Dick Hooper was one of the most caring, helpful and capable people I have ever known and he will be remembered by many,” said James.

She is grateful that she was able to visit him right up until almost his passing.

“And I was grateful for the opportunity to show him how much he was truly loved in this community,” James added. “Keep being amazing up in heaven my friend.”

A former City councillor also had warm regard for him.

“He will be missed immensely… he will have a special place in my heart, always,” said Sharla Mauger.

“Dick would never let a challenge get him down,” Fassbender said. “One year we had an issue with a power connection that was needed for Cruise-In and it was the day before the event and we were told the City crew could not get to it in time! Not to be deterred Dick said ‘no problem’ got his ladder, climbed the pole, made the connection and all was well! He last comment was ‘better to ask forgiveness rather than permission’.”

Rotary is a service organization, believing in “Service above Self”, and he was one of the longest standing Rotarians in Langley having been involved in two different Langley clubs during the past 40 plus years, Morfitt said.

“Dick was the ‘go to guy’. He had the contact-list to die for, and always know exactly who to call, and how to get things done. Construct a park? Build a community garden? Raise money for important community services? Dick was your man. He’s the guy we’d turn to when we needed something special,” Morfitt said. “Our community has lost a true in-the-trenches leader and friend. We hope to make him proud by continuing his legacy.”

The family plans to have a celebration of life when it is safe for people to gather and hopes it can be summer 2022. In lieu of flowers, the family has asked for donations to the Rotary Club of Langley Sunrise for its charitable works. 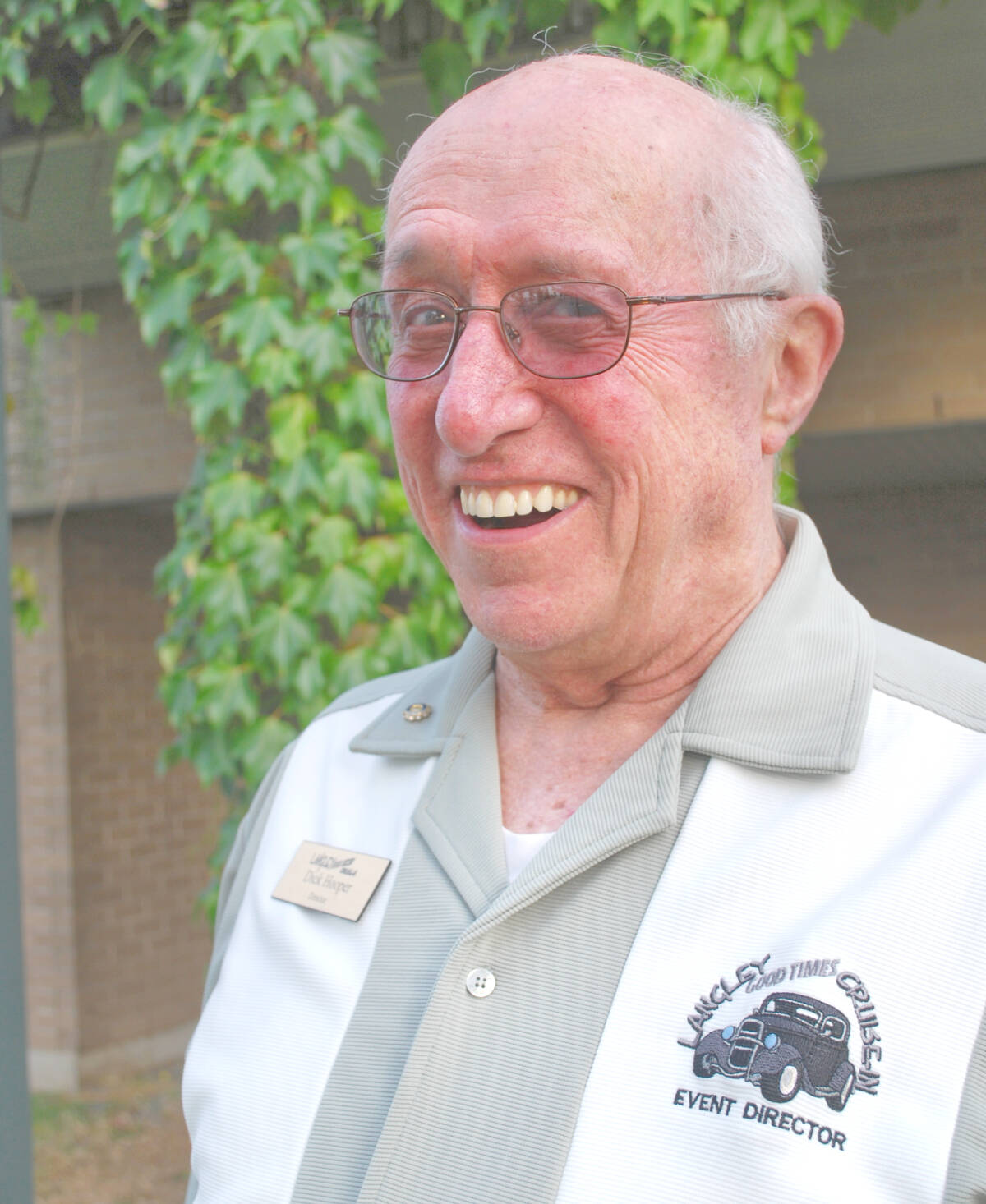 Dick Hooper was on the board of the Langley Good Times Cruise-In for more than a decade as well as volunteering for many other local causes. (Langley Advance Times files) 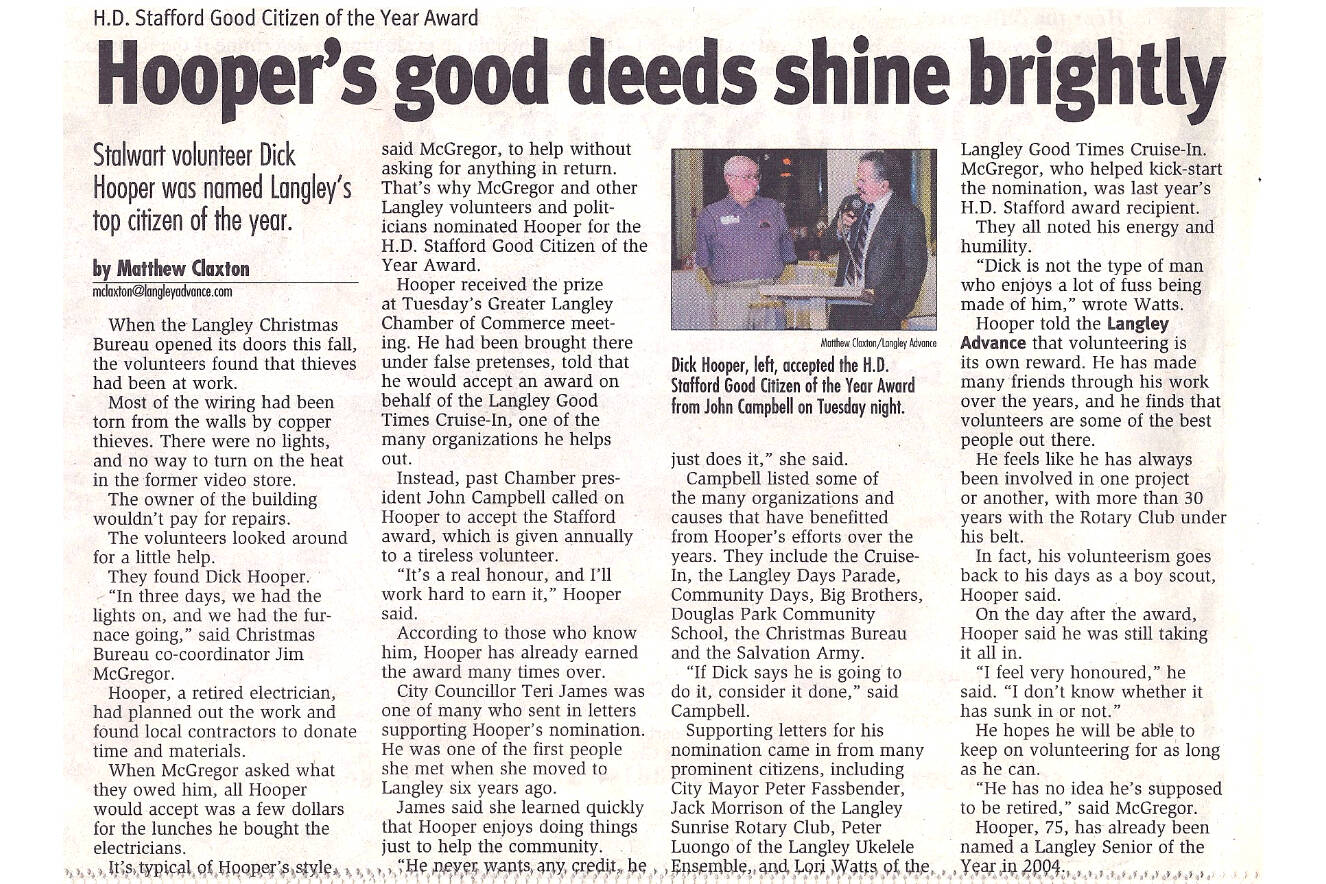 Dick Hooper was named the H.D. Stafford Good Citizen of the Year in 2007.