It goes down as one of the best years ever for the homeless, abandoned, and unwanted animals in Langley.

It was the 12th annual Furry Tails Ending gala, and while Langley Animal Protection Society’s executive director Jayne Nelson doesn’t have all the figures tallied yet, she’s confident the amount raised at the Harry Potter-themed party will shatter expectations.

Using the words of Hogwarts’ headmaster Dumbeldore, she said: “We are only as strong as we are united.”

And the sold-out crowd of animal lovers proved those words true at Saturday’s LAPS fundraiser in the Cascades Casino ballroom.

Last year’s gala raised $149,955 (the second largest amount ever) for the Aldergrove-based dog and cat shelter.

Thankfully, Nelson said, this year – with a record-breaking 430 guests in attendance – the event not only exceeded this year’s goal of $125,000, it surpassed last year’s total that came in just shy of $150,000.

Money from this year’s gala will help offset some of the huge medical costs incurred by the shelter, plus it will help augment other adoption, training, and wellness initiatives for the animals, she explained.

But she became almost giddy when revealing how some of the funds from this year’s gala will help launch a new nine-week pilot training program for “vulnerable youth.”

This program will initially provide an opportunity for up to six youth to explore potential employment, participate in training, gain experience, and earn practical certifications in the animal welfare/services sector, while working with animals at the LAPS facility, she said.Details are still being finalized, but Nelson expects to roll out the new program early next year.

While LAPS functions primarily out of the Township of Langley’s Patti Dale animal shelter in Aldergrove, and holds the animal control contracts with both the Township and City, LAPS is still a non-profit organization that has to fundraise for many of the projects and programs it offers for animal care.

The Furry Tail Endings gala is LAPS’ biggest fundraiser of the year.

“What I love about working at LAPS is all the ‘furry tail’ endings we get to be apart of, seeing the people who leave our shelter with a new family member in tow or the animal that we were able to help with the support from our community,” Nelson said, noting there are usually about 450 such cases a year.

“There is so much magic that happens every day behind the scenes, even though we are at times challenged by our work I am always so inspired by the people and animals we meet,” she added.

On that note, she explained that the gala is also a chance to party and say thanks to many of those ongoing supporters.

So, before a packed house, Nelson reiterated several times over a message of appreciation.

“Thank you for all that you do to make a difference,” she said, moved to tears a few times through the night.

“Michele Obama once said ‘success isn’t how much money you make; it is about the difference you make in people’s lives.’ We are here to celebrate the many ways you, and people like you, have made a difference in the lives of the thousands [in excess of 17,000] of animals we have cared for during the past 16 years.”

The gala team will take a two-week break from planning – primarily to give time to wrap up from this year’s gala – before starting preparations for next November’s event.

That said, Nelson has already fielded inquiries about sponsorships and tickets for the 2020 gala, and hinted that a few fun theme ideas are already being tossed around.

The Furry Tail Endings gala, hosted each of the past dozen years by Langley Animal Protection Society, is all about the animals.

Yes and no, Nelson said.

There are no shelter animals actually in attendance at the swanky soiree. But the animals and their needs are at the forefront of everyone’s thoughts during the fundraising gala that was held Nov. 2 at Cascades Casino.

So, it turns out the gala is more about the people behind the scenes, those who give so that the homeless, abandoned, and unwanted animals in Langley get a second chance at a forever loving home.

There were 430-plus people there who were lauded for their support. There were countless sponsors and regular donors who were thanked. And there were volunteers who work throughout the seasons who were recognized.

The night featured the presentation of a few awards, all in the name of LAPS founder – the late Patti Dale.

“We are so lucky to meet and work with so many wonderful people with beautiful generous hearts.”

In fact, a new award was created this year, to recognize one Murrayville woman who has given to LAPS at “every turn,” Nelson elaborated.

The inaugural Patti Dale Community Hero Award was unveiled and presented to Elizabeth Smith “for her incredible generosity in helping so many animals and people in our community,” she said.

Smith has been supporting LAPS in a multitude of ways for the past decade.

“She is a force to be reckoned with during the lead up to the gala. She works so hard to bring in unique and fun items for our silent auction. She buys, coerces, and genuinely leaves no stone unturned in her quest,” Nelson explained, noting that Smith started out as a dog walker, and became more and more involved in fundraising.

“She has opened her heart and home to some special animals adopted from LAPS. One of those special dogs inspired her to create a legacy fund in his honour, a fund that would provide veterinary care, food, and the basic necessities for pets belonging to low-income and homeless members of our community.”

The Major Legacy Fund, as it’s been named, has allowed LAPS to host two free street clinics that helped more than 100 people and their pets.

Another 70 pets have received veterinary care, for guardians who have applied for help from LAPS through fund.

“And if that wasn’t enough, she never misses an opportunity to bring a range of healthy snacks to feed grateful LAPS staffers,” Nelson said.

Smith was humbled by the presentation.

“I was really taken back,” she shared. “It’s a tremendous honour. I do it because I want to give back.”

Always inspired by the kindness and generosity of her great aunt and uncle, Smith said she “always wanted to eminate the goodness they bestowed on me.”

In addition to the new award, the annual Patti Dale Award of Excellence was also given out during the gala, to not one, but two “deserving volunteers” who exemplify all the things that Dale stood for – compassion, commitment and leadership, Nelson said.

“We have so many extraordinary volunteers it is often difficult to choose one winner…so sometimes we pick two,” she explained. That’s what they did again this year.

Out of six nominees, who between them donated hundreds and hundreds of hours in the past year – LAPS honoured Helene Robillard and Pauline Markle as this year’s recipients.

Markle has volunteered more than 15 years with LAPS, literally walking thousands of kilometres on the trails behind the shelter in an effort to enrich the lives of thousands of dogs in care.

Robillard, only a volunteer for the past four years, was recognized for not only walking dogs, but lending a hand “anywhere she is needed, giving hundreds of hours every year,” Nelson said.

Acknowledging the efforts of both women, she said: “They each make a real difference in the lives of the animals they touch.” 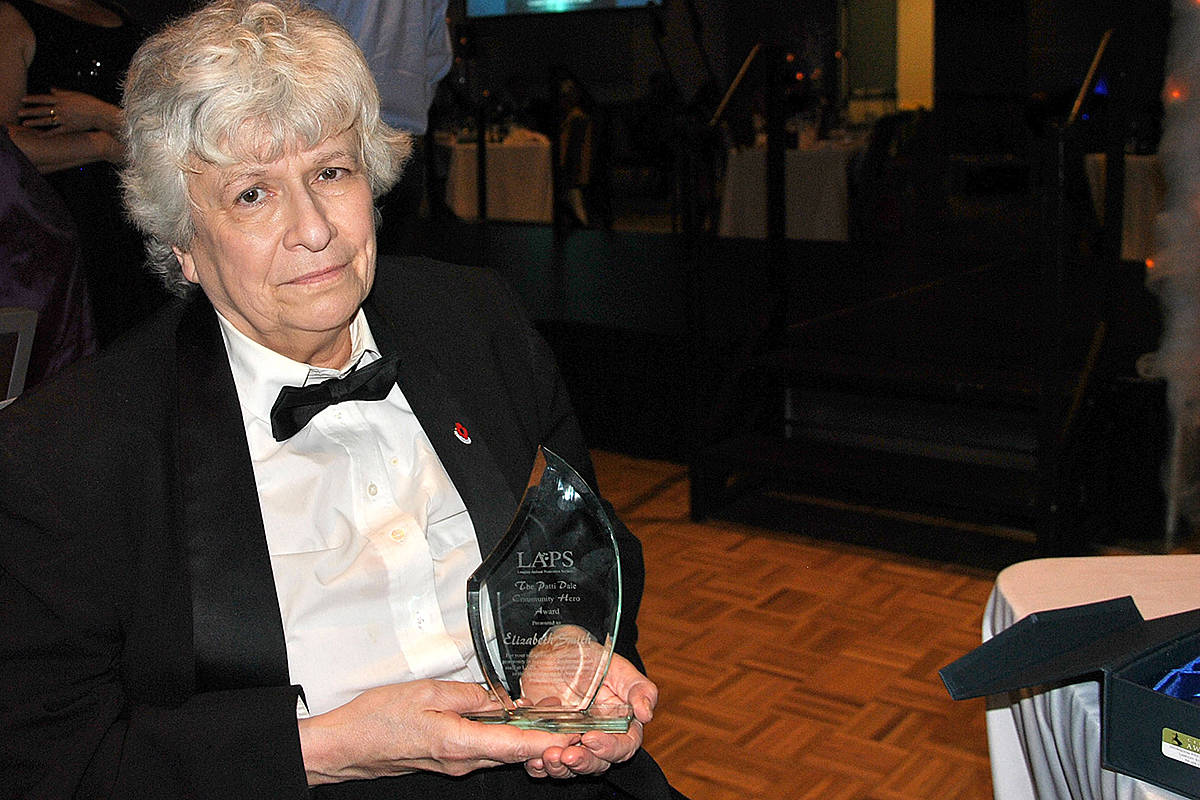 A new award was created to recognize all that Elizabeth Smith has done for LAPS in the past decade-plus as a volunteer and donor. (Roxanne Hooper/Langley Advance Times) 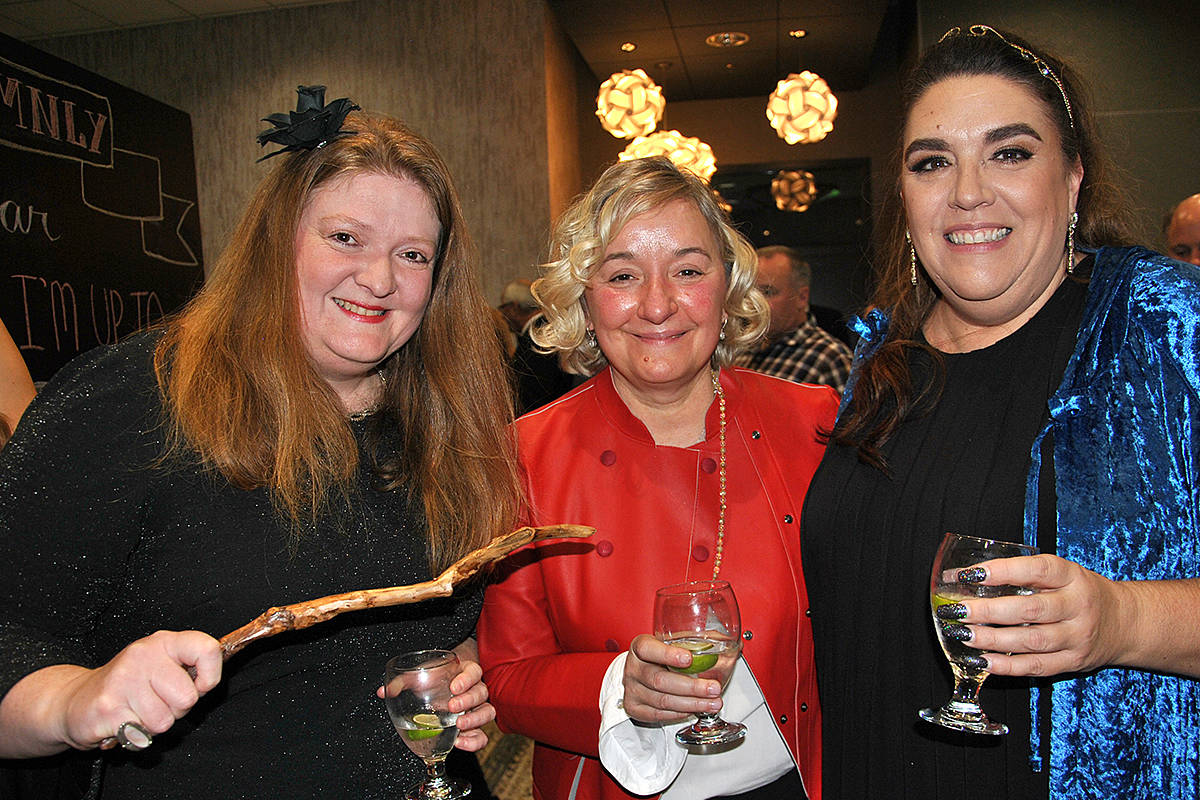 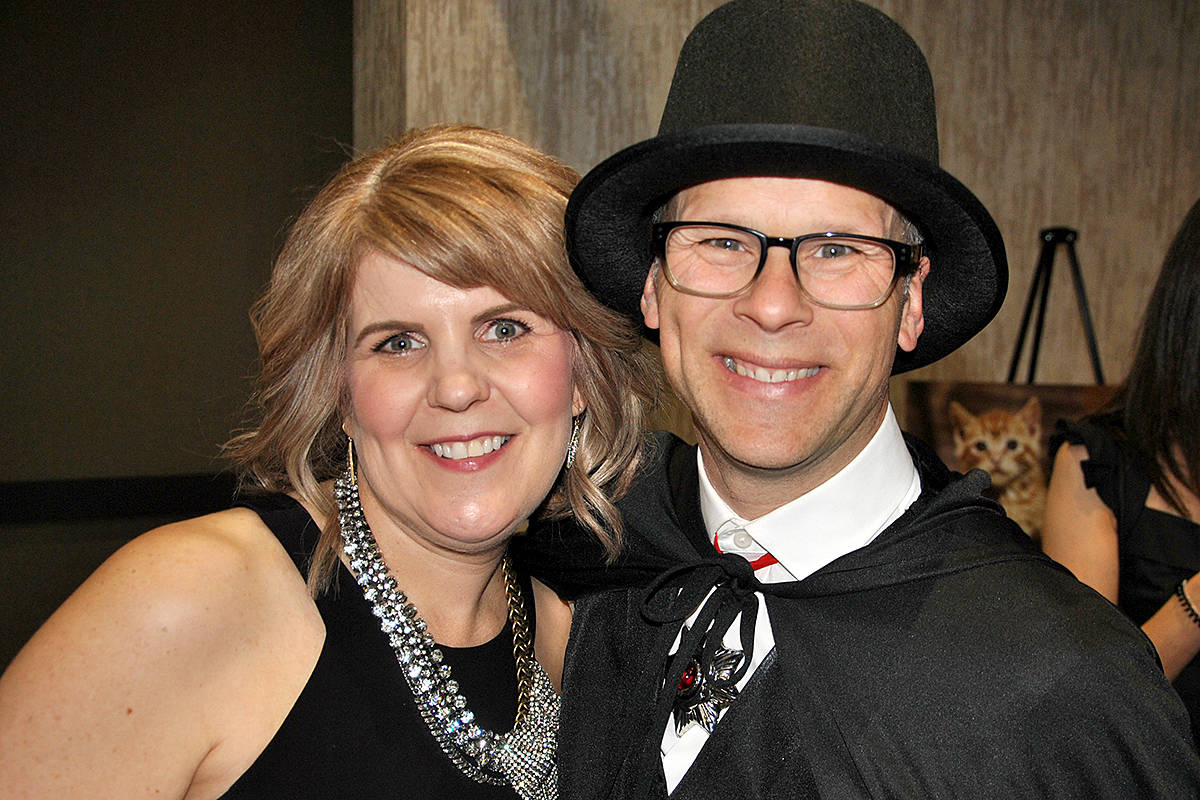 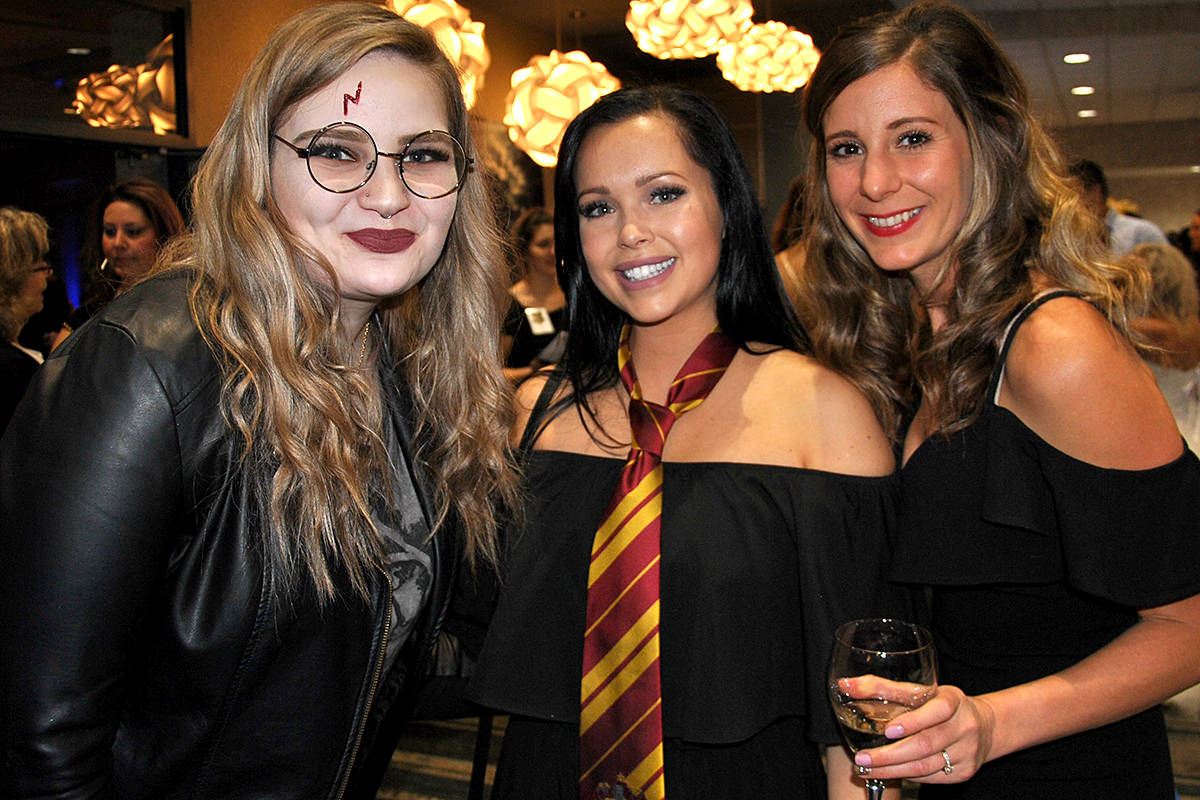 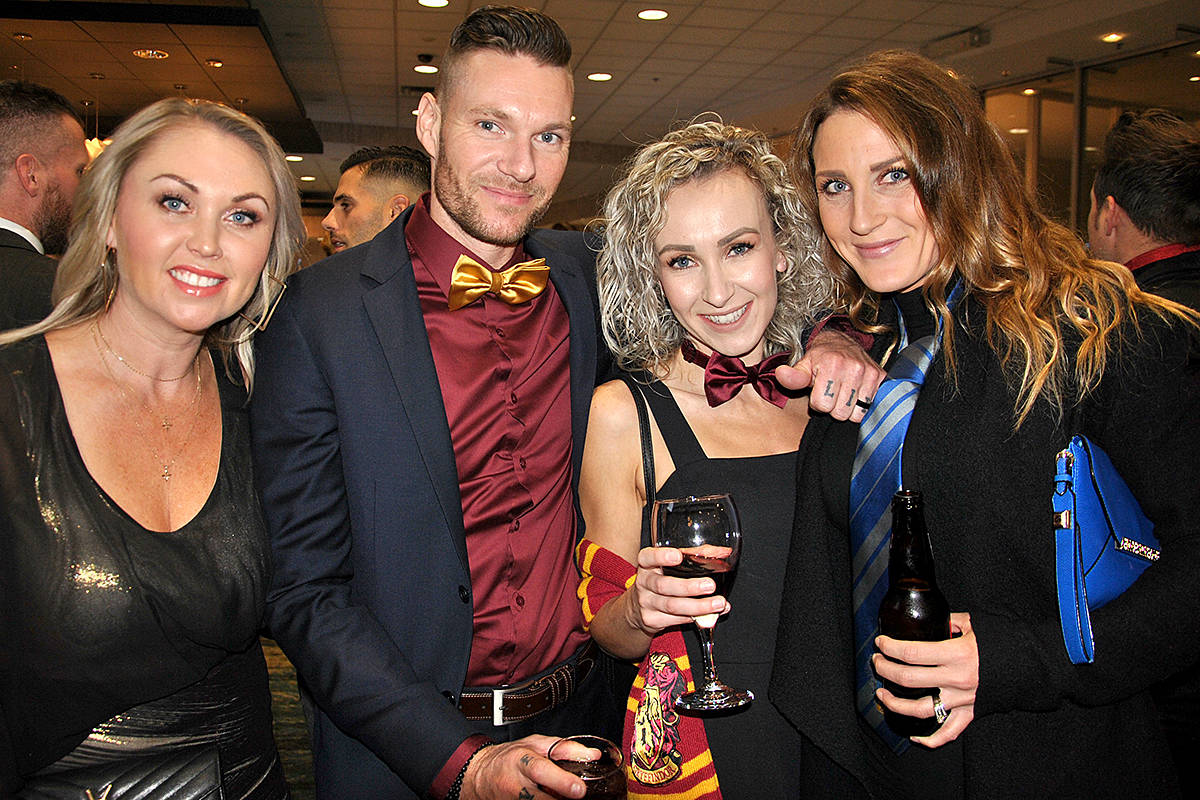