A temporary shutdown of the Maples Discovery Gardens Co-op in Langley Township has become permanent.

Because of the continuing theft of property and plants, the garden board of directors has decided not to re-open and the garden is now looking to relocate its plants and equipment.

Maples Discovery Garden director Amanda Smith said many of the plants will likely be transplanted to public parks in the Township of Langley this fall once an inventory of the Maples trees, evergreens, fruit trees, blueberries and roses has been completed.

Smith said the Township Parks and Recreation department has welcomed the donations.

“There’s not a lot of budget for Township gardens,” Smith said.

Other community groups, such as the Langley Environmental Partners Society, have been offered donations of everything from plants to garden tools and chairs.

The garden’s Nature’s Classroom program has moved locations for the year to the Langley Demonstration Garden on Fraser Highway.

“It’s a sad story, but it’s the best outcome for us,” Smith said.

Smith noted the garden was also facing a substantial reduction in size, the result of the impending development of a portion of the green space leased by the co-operative, and tougher fishery regulations that require a greater setback from nearby Latimer Creek, an active salmon spawning stream

On August 22, the garden will hold a final public open house from 11 a.m. to 5 p.m., what Smith terms a “goodbye garden party.”

Smith is hoping people who planted their own produce on the community plots will come by for the event.

“It provided a special space to Langley residents, and we hope that other green spaces in Langley can offer the same special feelings.”

People who want to attend the open house are invited to RSVP by emailing info@maplesliving.ca.

In the three months leading up to the initial decision to close the garden, an estimated $15,000 in plants and supplies were taken.

In early December, two gardeners tending to their compost discovered the electrical panel had been stripped and cut leaving the garden without electricity and unable to run any irrigation to the garden areas.

In January and February, almost every day, people were on the site stealing everything from folding tables to water cans to hose fittings as well as garden hand tools and power tools.

Smith said would-be thieves should understand the garden has not been abandoned and most of the plants and planting supplies are spoken for.

“It still is private property.”

The garden was incorporated as a non-profit cooperative in May of 2009.

The Maples mission statement was “to enable community members of all ages and abilities to learn about the connection between food, nutrition, gardening, and environmental sustainability in a welcoming and natural setting.”

It offered over 50 community garden plots (plus raised beds for access to people with physical challenges) for seasonal lease.

The garden also operated a community supported agriculture (CSA) program that generated 10 weeks of fresh, local, naturally grown vegetables and fruits produced at the garden without pesticides or herbicides of any kind, using only organic methods of mulching, fertilizing and planting.

The Maples offered education program for school children, who toured the facility and acquired some hands-on experience in small scale, environmentally friendly gardening methods. It was home to a colony of bees tended on-site by members.

It has been visited by over 1,000 elementary school age students, 400 gardeners, and over 200 ESL students . 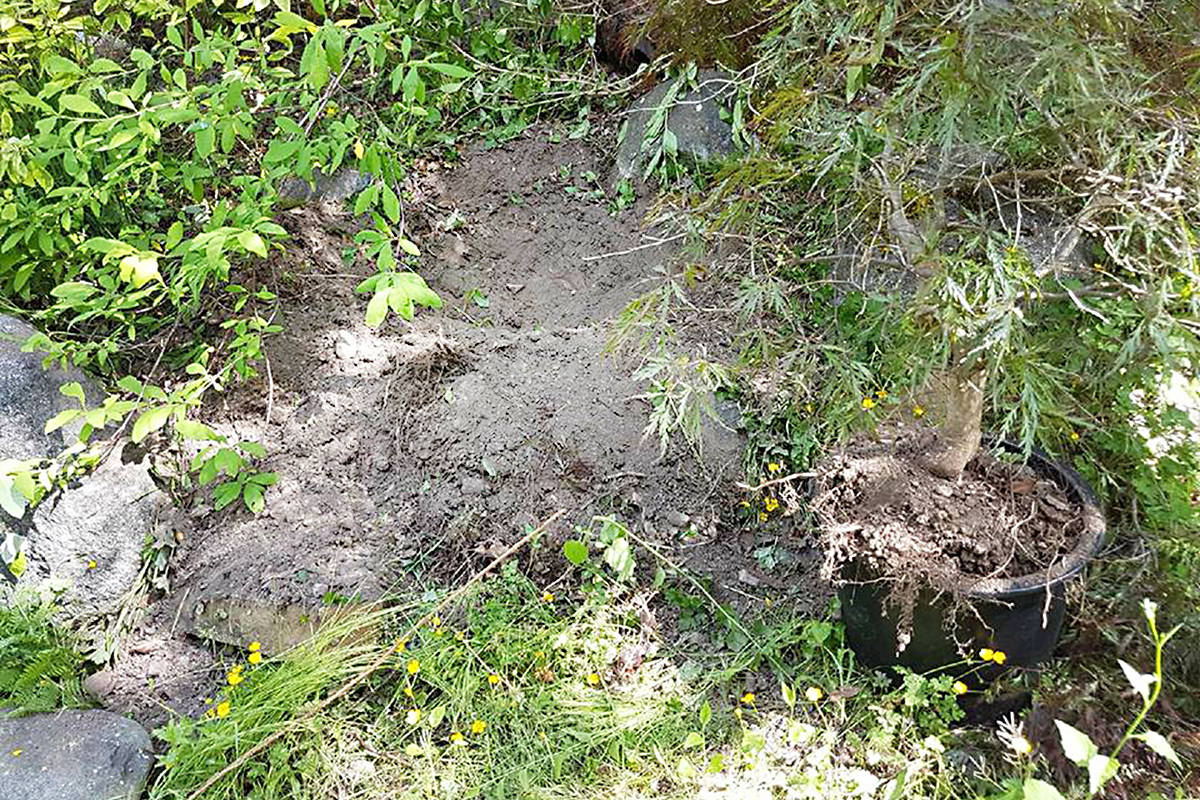 The latest theft from Maple Discovery Gardens left a space where some potted Maple trees used to be. Supplied