At 97, long-time Langley City resident Edwin Campbell’s memory is fading, but there are some things he can never forget.

He was a tail gunner on a Short Sterling four-engine bomber, flying with a multinational crew that included a British pilot, who was the “old man” of the crew at 20, a Free French radio operator who would point where he used to live during missions over occupied France, and another gunner who hailed from Ireland.

“They were just bunch of kids,” Campbell’s daughter, Shelly-Ann, summarized.

“He survived three years of that. It [the Short] was just a flying gas can full of bombs.” 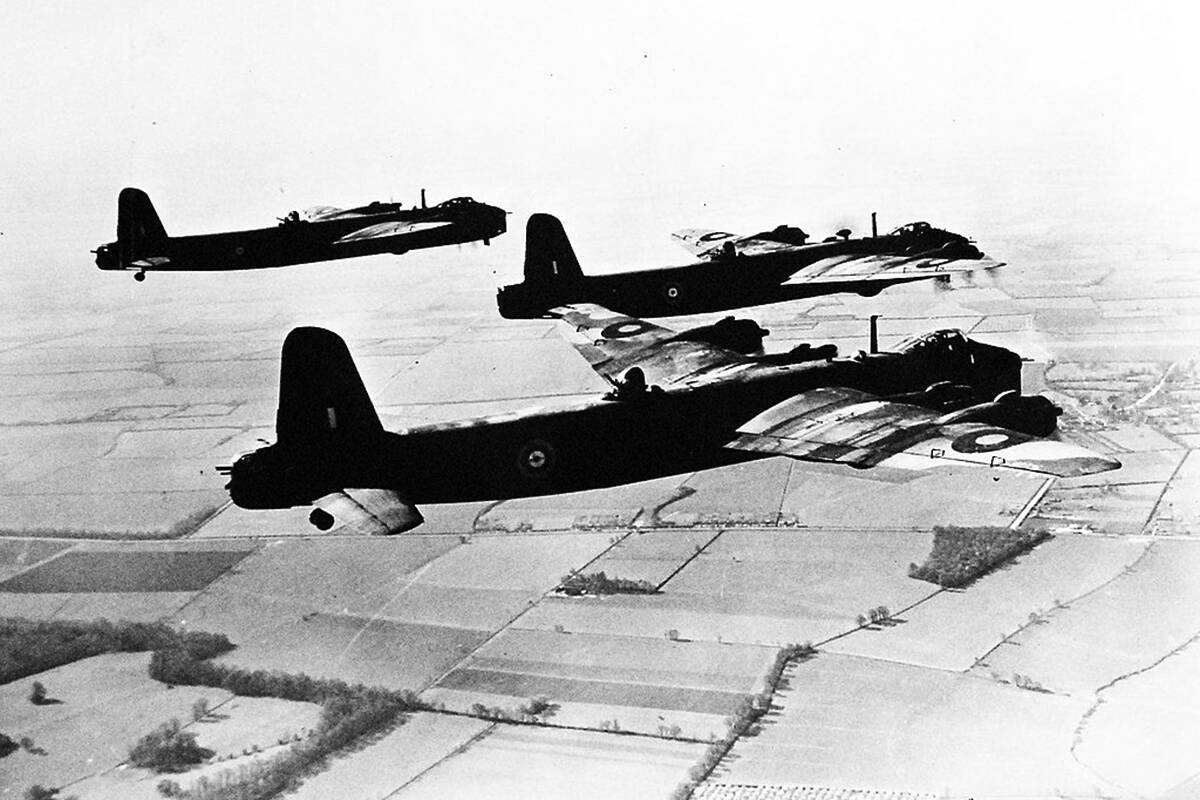 Three Stirling bombers taking off over Great Britain, 1942-43. Langley resident Edwin Campbell was a tail gunner aboard a Stirling, and his survival led some to say he had ‘horseshoes up his butt.’ (Wikipedia/U.S. Library of Congress public domain image)

Recently, when Shelly-Ann visited her dad at the Marwood Centre extended care home near Langley Memorial Hospital where he now lives, he seemed agitated and unsettled.

“I asked what was up,” she recalled.

“He said he was waiting for the train to take him back to base, [saying] he can’t be late, the boys are relying on him. So I asked if I could wait with him. He said yes. That day, his mind was in England, trying to get back to his air force base on time.”

Usually, she said, her father didn’t like to talk about what he’d seen.

But one night, years ago, after her mother had turned in, they stayed up late talking.

That was when he described going to a pub in Manchester near the RAF base for an off-duty beer with the rest of “the boys.”

When the air raid alarm sounded, they calmly sat underneath the tables, beers in hand.

Then, someone said a building nearby had been hit by a bomb and they needed help pulling people out.

What they found were dead bodies.

Campbell recalled another night, when he was out late and using a “borrowed” bicycle to get back to base in time, pedalled through a park.

It had been shot up during an air raid and there were people, dead, on the benches.

Usually, Shelly-Ann said, her father is a man of few words.

When he talked about the war, it was usually about things like how the electrically heated suits that were supposed to keep air crews warm at freezing high latitudes would short out from sweat, rendering them useless.

Or how he discovered the food in England wasn’t much of an improvement on the residential school he was sent to at age seven (he was placed there because his mom had died and his father couldn’t run the farm and look after five children, all under the age of twelve, at the same time).

“I was hoping the chow would be better in the air force,” he observed.

He was involved in supply drops to the underground resistance in Erurope where they had to find a small marker fire in amongst high mountains and low valleys with only enough fuel for one pass to spot and drop.

“Sometimes they would take a second pass to find it and drop and then cross their fingers on the way back to base that the fuel would last at least over the English Channel,” Shelly-Ann related.

When he came back to civilian life following his honourable discharge as a pilot officer (equivalent to a modern second lieutenant rank) on Sept. 27, 1945, Campbell was 20.

He put himself through university and became a teacher, the kind who would tutors kids for free if he thought they needed it, his daughter notes.

This Remembrance Day, he will sit outside his residence at Marwood with his daughter, and wait to hear the propellers of the airplanes doing a fly-past.

Shelly-Ann remembers asking him once if he had any regrets.

“I wish I’d of helped more people,” he said.

READ ALSO: Haunted by the ghosts of the Medak Pocket: a Langley veteran remembers

CP Holiday Train goes virtual again for 2021, no stops in B.C. or Alberta

Grandparents helping look after grandkids: why it’s good for both sides