Before Troy Tardiff became a custodian in the Langley School District, he worked at a hospital supervising a cleaning crew.

The job could leave him a little down at times, he said. He’d clean a room only to come back the next day and learn the patient there had passed on.

That was one reason why he took a job working in Langley schools seven years ago. Tardiff, who has a 10-year-old son, loved the idea of working with kids. It would be a more positive environment, he felt.

But his night shifts keeping schools clean meant that by the time he was working, the kids were long gone.

When the pandemic struck, cleaning schools became essential, at all hours of the day. Custodians like Tardiff were moved onto day shifts, scrubbing down frequently touched surfaces like door knobs and light switches.

His primary job now is to keep the kids at Shortreed Community School in Aldergrove safe by keeping the school clean, Tardiff said,

But he also hopes to help out and bring a few smiles while he’s there.

“He just is continually reaching out to kids in ways that bring out the best in them and the best in him,” said Shortreed principal Chris Wejr.

Tardiff has become known as “Mr. Troy” to the students at Shortreed, and he’s learned most of their names as well.

“I always jump in wherever I can,” Tardiff said.

“We’ve seen him go above and beyond,” the principal said.

During his lunch breaks, Tardiff can be found outside with the kids playing soccer and basketball, trying to make sure everyone is involved.

Inside, beyond his formal duties, he often helps out with shepherding kids around the school.

Some students at Shortreed, as at other schools, need breaks from the classroom during the day, and have to go to another part of the building.

Tardiff is there to escort them from place to place, and he says he likes to be able to provide an extra adult they can talk to.

“It’s nice to be able to take those kids, even if it’s only for 20 minutes, and sweep the halls, and we talk,” he said.

Just listening can be a big help, Tardiff said.

He sits and reads with kids, offers them a helping hand, and in general, is there to talk to.

He’s also been providing some extra entertainment for the students.

On Halloween this year, Tardiff arrived at school as normal, but several times during the day, “Spider-Man” made appearances in classrooms.

After the appearances of the Marvel superhero, he would quickly disappear again, replaced by mild-mannered Troy Tardiff.

It took the kids a while to figure out who was wearing the outfit, but by the end of the day they’d realized it was him, Tardiff said.

He’s encouraging the kids when they keep their classrooms clean, giving out a trophy, the Golden Garbage Can, to the class with the cleanest room.

Wejr noted that Mr. Troy has become such a part of the school, kids have started making custodial supply toys in class. 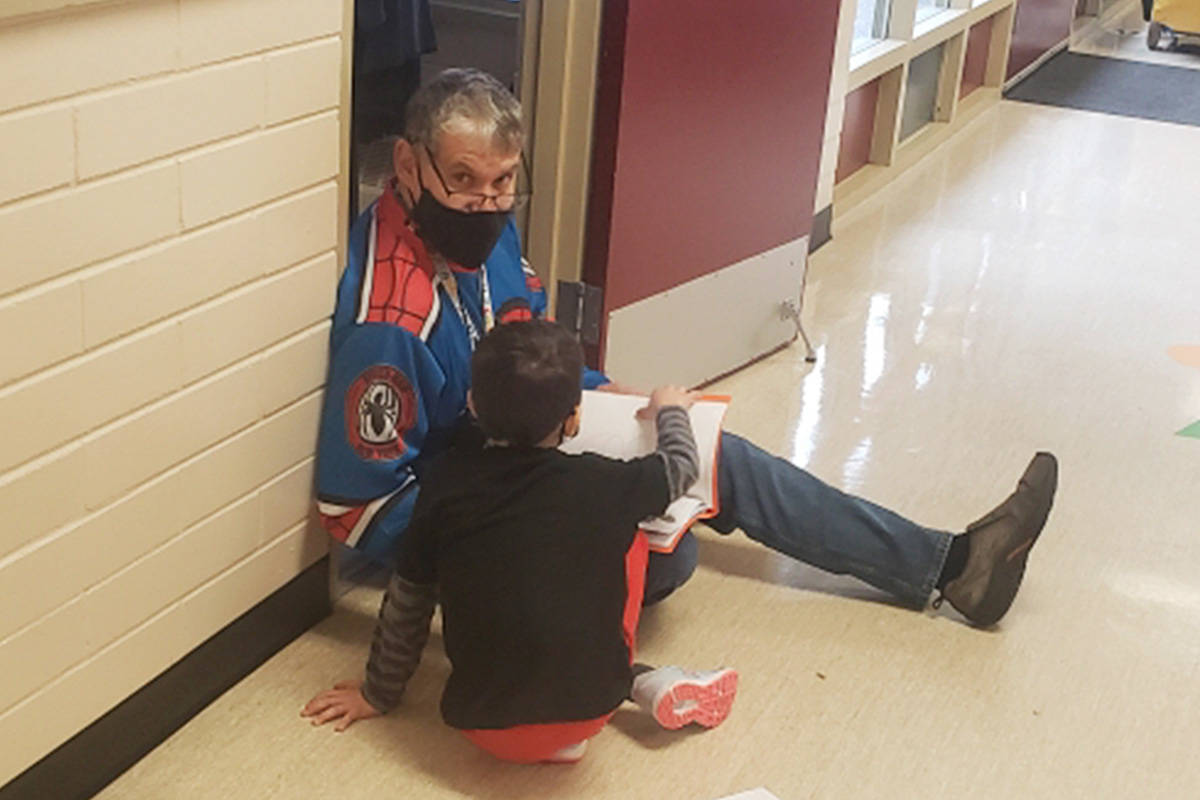 Troy Tardiff reads with a student in the hallways at Shortreed Elementary. (Shortreed Community Elementary/Special to the Langley Advance Times)

Fort Langley Christmas tree lights up without a crowd