Fourth in a multi-feature series

This week, the Langley Advance Times shares the story of a recovering addict who spent more than a decade on the streets of Langley, and how he uses art and conversation to help him cope.

REALIZATION: A little self-love is in order

FIGHTING FOR RWANDA: One book at a time

Mike Hunniford doesn’t take anything in life for granted – including life itself.

The Langley-born and raised street painter uses his art and easel as a medium to share his love of life and his personal story of “salvation.”

The 53-year-old Langley City resident is grateful for life, and doesn’t mind sharing his experiences, his thoughts, his art, or his support with others.

That can comes in the form of familiar faces or complete strangers who stop by through any given day to visit with him and watch him paint at the entrance to McBurney Plaza.

It’s his quest to help others as he struggles, day by day, to rebuild his own life.

As a recovering addict – whose drug of choice was alcohol – Hunniford spent at least 10 years of his life homeless – living on and off the streets of Langley.

He’s lost hundreds of friends to suicide and drug overdoses through the years, and he has somehow survived at least a couple dozen visits to death’s door himself.

A cross tattooed on his face, and another on each of his hands give him daily reminders that he’s fortunate to be alive and that by giving himself over to God, “God has saved me.”

Not a religious man growing up, he tells of a day three weeks into detox that change his entire life.

It was September 2009 and one of the hottest days Hunniford can ever remember.

He fell to his knees, sweating profusely.

He locked his hands together, reached up to the sky, and for the first time ever prayed.

“I didn’t think I could stay sober a second more.”

Hunniford was overcome with a sense of wellness that washed away his chronic anxiety. He calls it a spiritual awakening that changed the course of his life.

“It was so freeing, and I felt so wonderful,” he said. “Alcohol stole my soul, and God gave it back.”

Having slogged through so many failed attempts to get sober in past, Hunniford clings hard to all he’s managed to achieve since that day. He doesn’t want to ever take it for granted for fear he’d quickly relapse.

“That’s why I hang on to my sobriety so tight,” he elaborated, noting a day seldom goes by where he doesn’t attend an AA meeting.

At one point, the people in his support group were the only people who loved him – when he couldn’t even love himself.

Today, he shares how he’s grown and he is actually proud to be Mike Hunniford – something he never thought possible.

By age 15, however, he’d already discovered the world of alcohol. His grandparents left town for a weekend, and he and his cousin raided their liquor cabinet.

Hunniford remembers them downing a “gargantuan” bottle of Napoleon brandy. His cousin awoke the next morning with a massive hangover. Hunniford awoke with an insatiable thirst for more.

“‘I think you got a problem,’ my cousin said to me, when I suggested we start [up drinking] again the next morning. Boy, was he right.”

That started more than a quarter century of drinking and drugging that took Hunniford to the brink of death multiple times.

There wasn’t a drug or drink he didn’t try through the years, including creating his own hooch with fermenting fruits and stale bread made in stolen garbage pails, and scouring garbage pins at the back of local nightclubs during the early morning hours, attempting to rescue every drop of discarded booze.

“I was such a hard core drinker. I’d down a 40-pounder and then get drunk again on my vomit,” he said.

“I don’t think we should sugar coat any of this stuff. It’s life or death. I shouldn’t be alive,” he said, grateful he is.

“A river, an ocean, is never enough,” for an alcoholic, and he still recounts that today.

“How I’m alive is an absolute miracle,” Hunniford added, admitting that just one more drink now would kill him.

Because of all the time he lost to drinking and drugging, he partially jokes that he’s only 10 years old now.

“I was sedated most of my life” and never gained the tools to deal with people.

So, much like a child, he’s learning how to have healthy and real relationships.

For instance, he has a girlfriend of seven months. He’s also recently visited with his mother after more than a decade of hiding in shame.

And not long ago he met his nieces and reconnected with a few other family members he hasn’t seen for years.

“I don’t know what normal is, but I’m anxious to explore,” he said.

One of the keys to Hunniford’s sobriety, besides working the program, he said, is keeping his life simple and sticking to a routine.

He lives in a sparse bachelor suite in Downtown Langley that gives him easy access to his perch at the entrance to McBurney Plaza, where he can be found with his shopping cart full of painting supplies, canvases, an easel, and his fold-up chair.

“My routine keeps me sober. It’s a big part of my sobriety.”

The painting is cathartic for Hunniford, who doesn’t sell but gives away his pieces to people who vow to display his work.

He’s always there with a smile and a willing ear to listen.

But Hunniford is still amazed at how many passersby take him up on the offer, and actually stopping by for a visit.

Sitting down on the adjacent City bench, folks share their most personal stories with him.

In return, he hopes he can offer just a smidgen of the support he’s received through the years – be it becoming just a friendly ear to talk to for people who may be living with mental illness, addiction, or homelessness, or whether it’s offering hope and advise to loved ones who struggle as they watch family members or friends dealing with the same.

Hunniford is anxious to educate and show compassion.

Often, he said, the disenfranchised are at or near an all-time low in their life, but they are still fellow human beings.

It’s important to tap into everyone’s humanity, just like his late friend Sherry Myers did for him.

A complete stranger, Myer took a chance on Hunniford 10 years ago, literally pulling him out of the bushes in front of the downtown Starbucks and taking him home.

That sweet gesture, friendship, and compassion from a recovering addict helped Hunniford turn his life around.

And he hopes he can pay a little of that forward.

Acknowledging he’s become a bit of a fixture downtown, Hunniford said he’s like a street ministry of sorts, referring many people – some going down a similar road to him – where they can turn for help when they’re truly ready.

“Not by any stretch,” he said, taking a huge drag from his cigarette.

But each and day he sets out to be a little bit better version of himself – and he’s grateful by day’s end to realize he’s remained sober another day, that he’s shared or listened to someone’s story, he’s given a little help or direction to someone in need, he’s gifted a painting, or he’s simply have brought a smile to someone’s face.

For the opportunity to do that so much, he’s eternally grateful.

“It can be a fantastic life being clean and sober,” he said, picking up his brush and going back to a whimsical painting he’s layering over top of a discarded canvas. 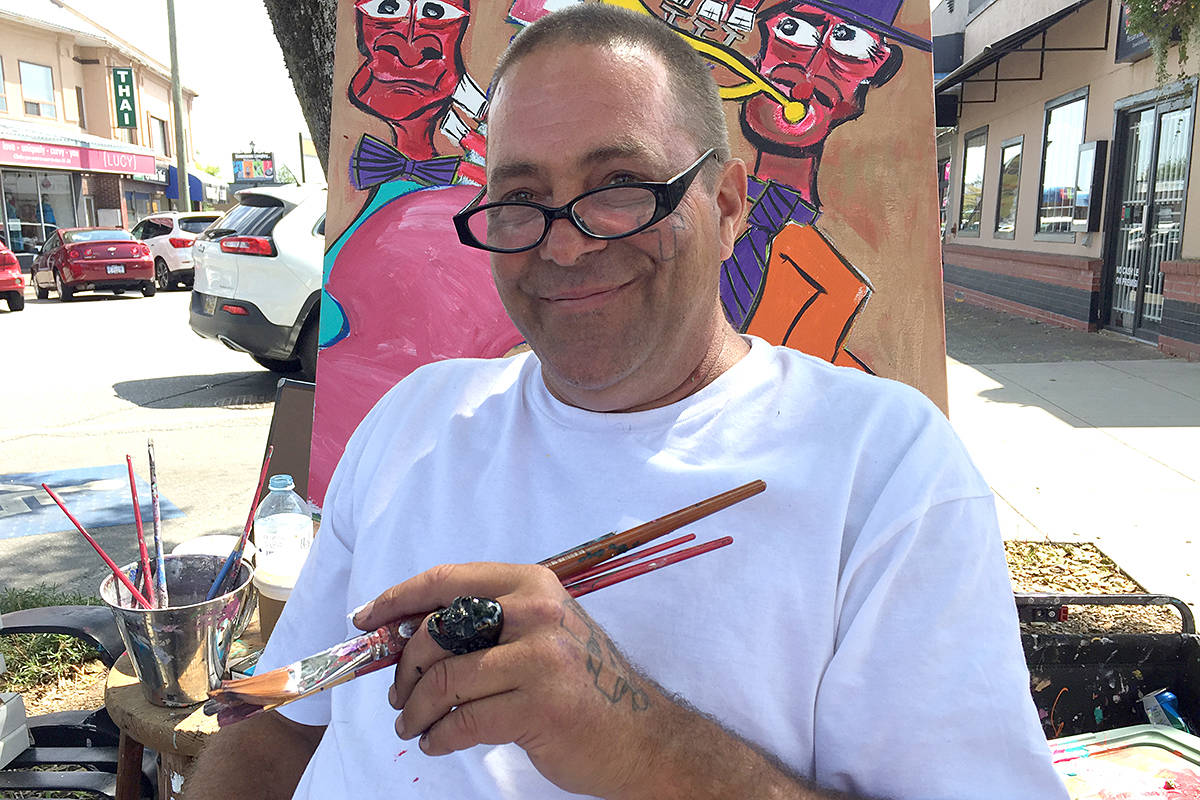 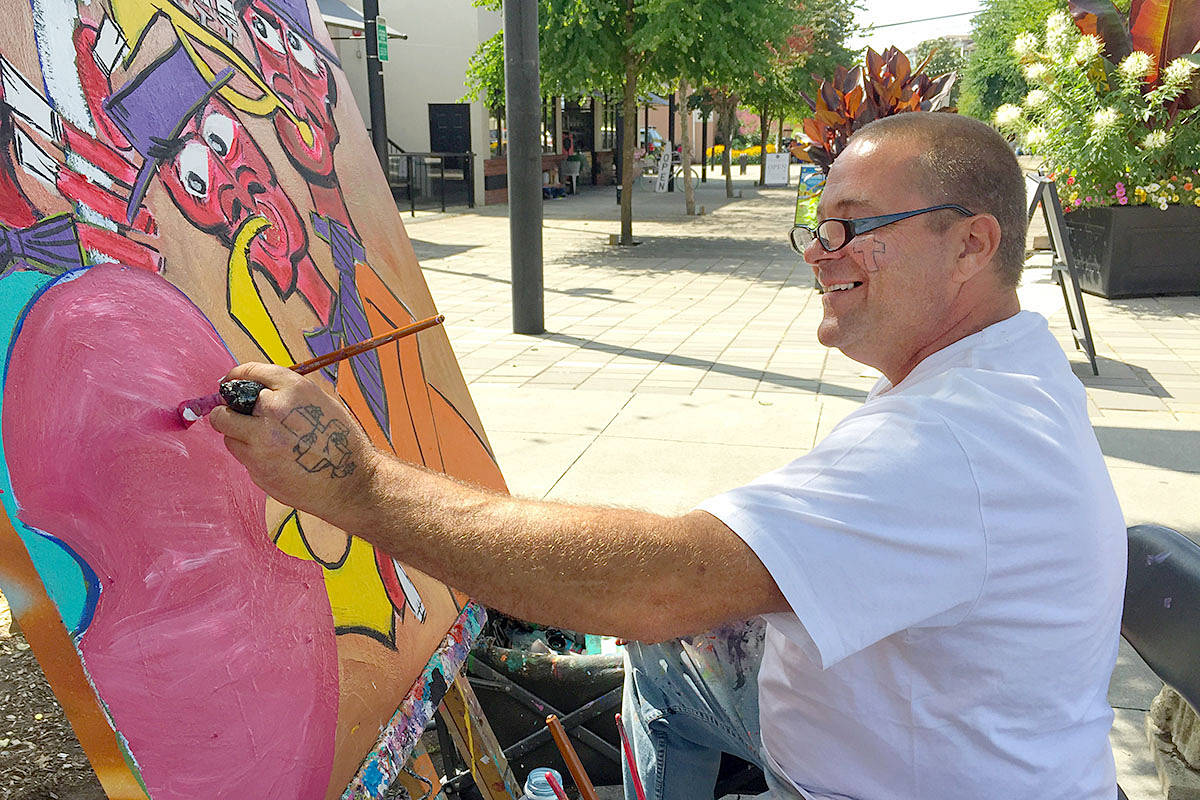 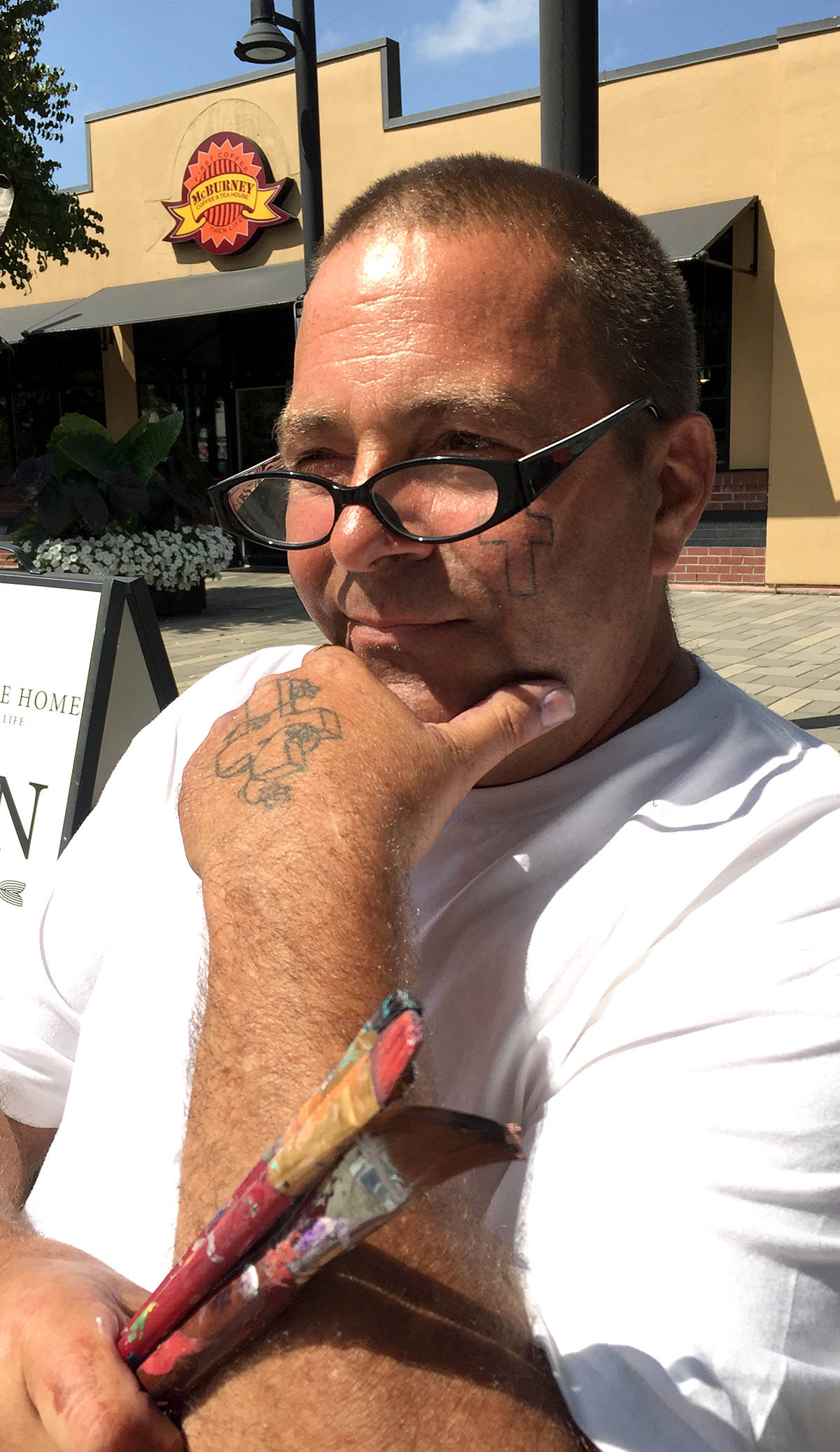 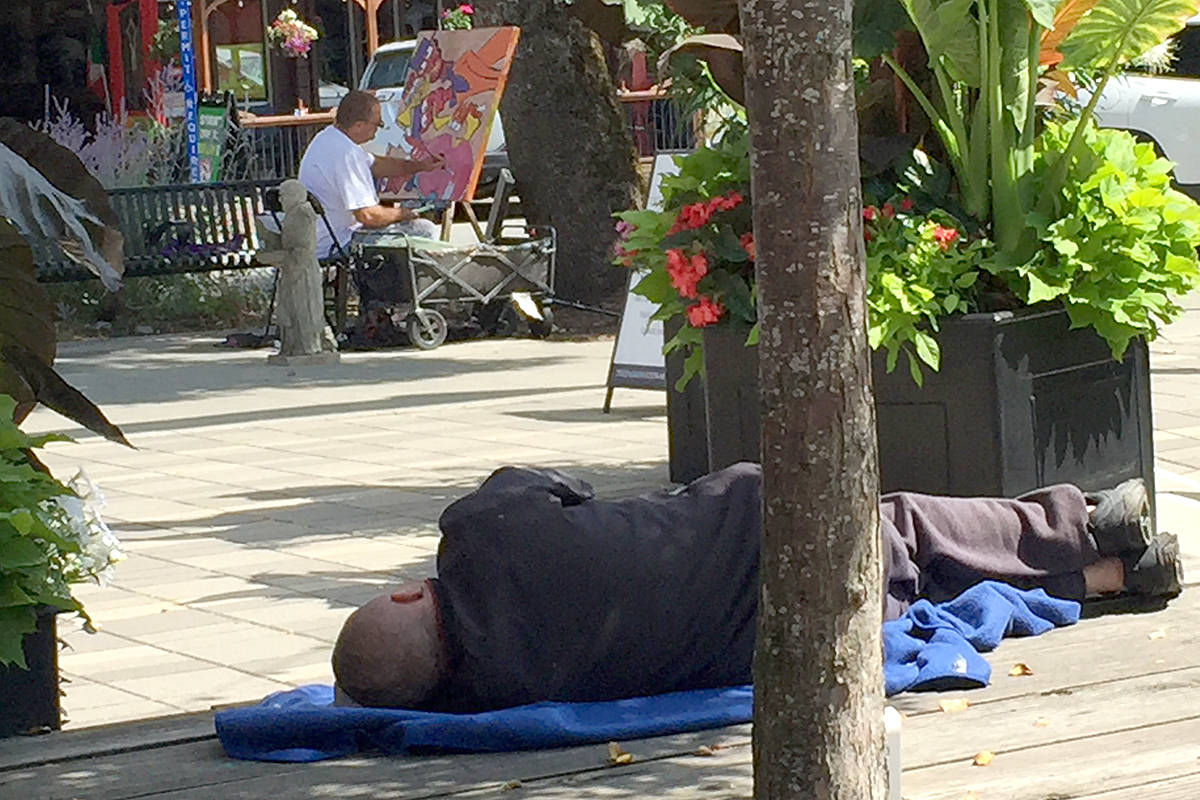 ‘Coming to you live from Fort Langley…‘