The community just got a little brighter after a local artist completed his latest project as part of the downtown Langley Mural Walk.

“The whole project started after I painted my last mural in Langley, which is the “Preserve What You Love” mural just off of Douglas [Crescent]… that’s kind of where everything started,” Stewart said, noting he completed his first mural downtown last Spring.

The Brookswood Secondary grad said it took him two days to complete his latest mural – a burst of flowers on a 36-foot long and 18-foot high wall on the C-Lovers Fish & Chips building.

“Both of [my murals] are tied more to my artist practice,” Stewart explained. “I focus a lot on the environment and sustainability because I feel those subjects aren’t addressed enough in the artist world.”

Stewart said his goal with his art is to challenge people and get them thinking about their impact on the environment.

“This [mural] is bringing the colour and vibrancy of nature into otherwise monochromatic cityscape,” he said.

Have you checked out our #muralwalklangley? @enlifestudio just added this beautiful piece of art, (which will be added to the printable map soon!), located at 20251 Fraser Highway! Please tag us in your photos and mention #muralwalklangley to share your adventures with us! 📸: @kianakms

A post shared by Discover Downtown Langley (@discoverdowntownlangley) on Sep 23, 2020 at 1:01pm PDT

Stewart earned a diploma in Fine Arts from the University of the Fraser Valley, but said creating art is not something that can always be taught in a classroom.

“A lot of it, with mural work, I feel is trial and error because there really isn’t a course that teaches you how to translate a painting into something that large,” Stewart said.

“I started out my career painting cars and that transitioned into painting everything,” he recalled. “I’ve painted everything from cars, to bridges to boats to sculptures, but I wanted to find a way to branch all that into my art, which is where murals came into play and that started about four years ago.”

Although Stewart considers himself a newcomer to painting murals, Teri James, executive director of the Downtown Langley Business Association (DLBA) calls his latest piece a “showstopper.”

“Alex is a return artist… so he sent this rendering of these amazing flowers and I got this idea in my head that this shouldn’t be a small wall, this should be a showstopper,” she said.

James said the idea for murals was an undertaking that started two years when the DLBA hosted a student mural contest and interest “exploded.” The opportunity to paint was eventually opened up to all artists and the Mural Walk was born.

“I asked a couple of artists, ‘Why are we getting approached by these very well known, and very talented artists to do these paintings at no cost?’ And apparently we’ve created a really awesome environment for artists to be creative and to come and express themselves,” she remarked.

“We don’t dictate what the artist has to paint… the reason they want to do this is that we’re giving them complete creative freedom,” she added.

Now, the Mural Walk has in excess of 23 murals.

“It was very popular the year we launched it, hundreds of families took part,” James said about the year old initiative.

The Mural Walk guides the public in a walk around downtown Langley to take in the one-of-a-kind art.

“This year has been astounding, and I want to say because of COVID, thousands and thousands of people have taken part in the walk and we know this because a lot of them have used #MuralWalkLangley.”

And the walk is expected to grow before the end of the year.

“In addition to Alex’s mural, we’ve had another one painted behind Brogan’s Diner, and we’ve got two more that are hopefully going to happen by the end of the year,” James explained.

To find a map of the Mural Walk visit the DLBA website at www.downtownlangley.com. 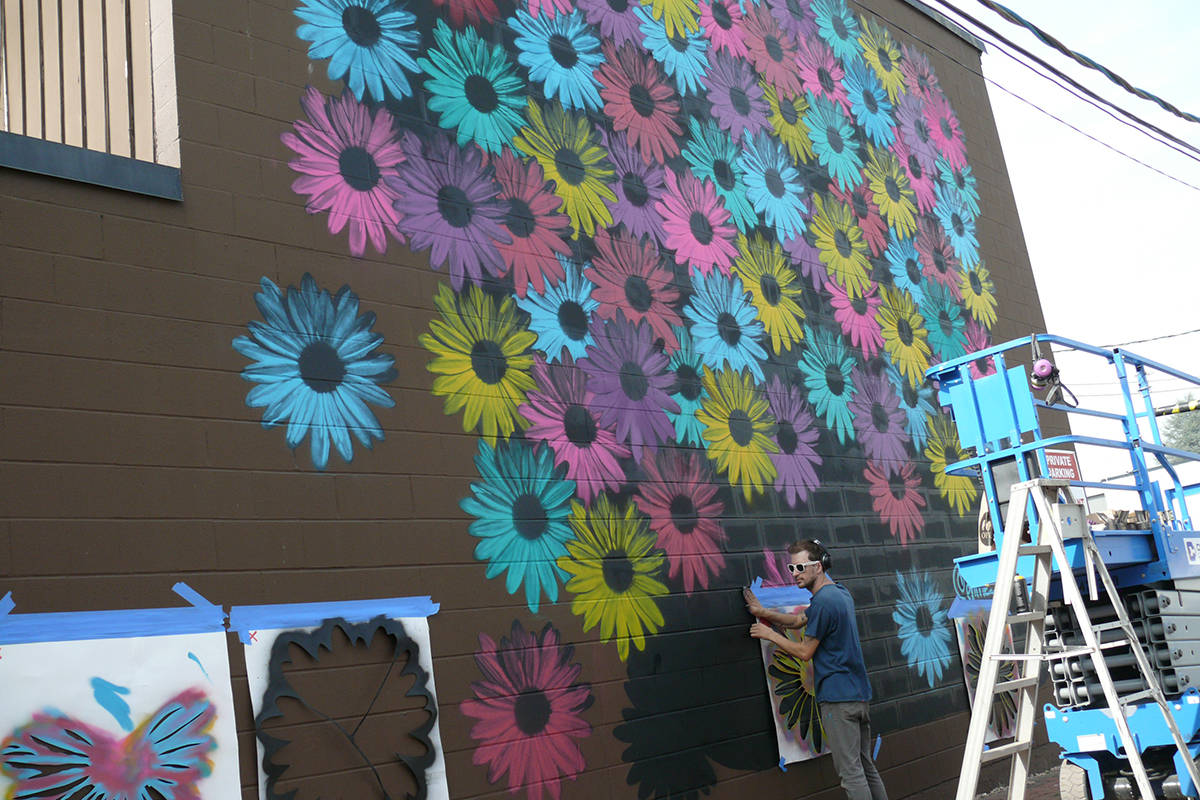