A sold-out crowd of more than 150 people attended the Hospice Plates and Glasses fundraiser in Aldergrove on Saturday, July 9, setting a record attendance for the event, and raising $22,000.

It was hosted by Dennis Quiring and Alena Buis of Quiring Trucking and Gravel Sales Ltd at their rural property, with catering by Angie Quaale and her culinary team from Well Seasoned, created with fare from with fare from 1 Fish 2 Fish Fresh Seafood Market, Bonetti Meats, JD Farms – Specialty Turkey Store & Deli, and Driediger Farms Market, served with beverages from KIS Consulting.

Shannon Todd-Booth, acting executive director of the Langley Hospice Society said the weather for the outdoor event was perfect, describing the outdoor location as a “beautiful site,” one that offered more room than their previous location, the heritage hall in Fort Langley.

“We’re hoping they will invite us back next year,” Todd Booth told the Langley Advance Times.

Speaking at the event, Todd Booth celebrated the opening of the new 15-bed “Doug and Fran MacDonald Langley Hospice Residence” which welcomed the first end-of-life patients on Tuesday, May 31’

She described how one patient moved into a private rooms at the new facility on that day after spending weeks in a semi-private room at the interim hospice location, only able to have sponge baths and unable to have her dogs visit.

“Her beautiful German Shepherds were some of her first visitors,” Todd Booth recalled.

READ ALSO: Langley Hospice Society decides to give their gala to go

“And after almost 43 days of sponge baths, she enjoyed a warm soak in the temperature controlled tub in the spa room at the new residence – our first resident to use it. Our dear friend died the following day.”

In March of 2020, when her mother took her own life, Castroparedes described how she was in a state of “shock and dismay” and as a full-time student, who worked part-time, wouldn’t have been able to afford counselling.

Because her mother had volunteered for the bereavement center, Castroparedes reached out and made contact with Linda Sheridan, the adult bereavement coordinator at their supportive program centre in Langley.

“I am so grateful for everything Linda has done for me, it is hard honestly to put it into words,” Castroparedes said, “but I think that my mother put Linda in my path to help guide and support me.”

Castroparedes was, as a result, able to win admission into her “dream law school” to become a lawyer.

“Linda has been through it all with me, the highs and lows of life after my mom passed,” Castroparedes explained.

“She has helped me see that I am allowed to have a future, and that does not mean that I have forgotten my mom, as her legacy can continue to live on through me and my surroundings.”

Todd Booth thanked the volunteers who were busy “behind the scenes and front and centre, packing, setting up the site and the amazing silent auction here tonight, serving and bussing and everything in-between.”

“Some were on site from morning to night.”

Todd Booth thanked the artists from the Fraser Valley Potters Guild Society for their generous donations to #heartsforhospice and the lovely potters market on site at the event and Alex Whittaker, who entertained the audience with music throughout the day. 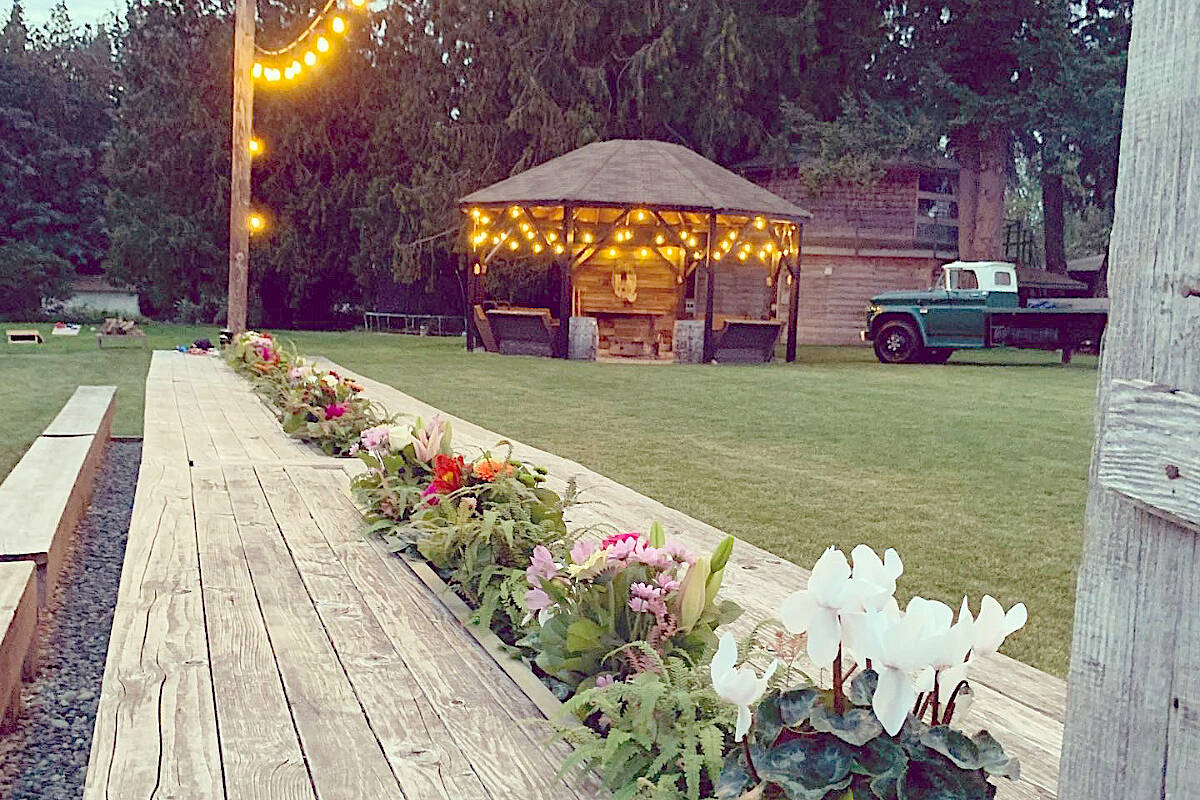 It was perfect summer weather for the annual Hospice Plates and Glasses fundraiser in Aldergrove on Saturday, July 9. (Special to Langley Advance Times)

Tribute lights up the skies over Aldergrove Fair