This year, the annual Ride For Doug from Langley is returning to it’s pre-COVID route and will, once again, have a barbecue at the end of the day.

Ride For Doug 2022 – Sunday June 5th – Back to the original format – https://t.co/OiMQONpEcM pic.twitter.com/ITzIXZNGOi

To be held on Sunday, June 5th, riders will cruise along the back roads of Langley, Abbotsford and Mission, a journey of about 200km that includes two rest stops along the way.

It will start and end at the South Langley Church, concluding with the return of the popular post-ride barbecue, where participants hang out and hear how the funds they raised have been put to use.

A food truck won’t be part of the event, however – only because demand has been so great, as restrictions have lifted, that one couldn’t be booked for the ride. 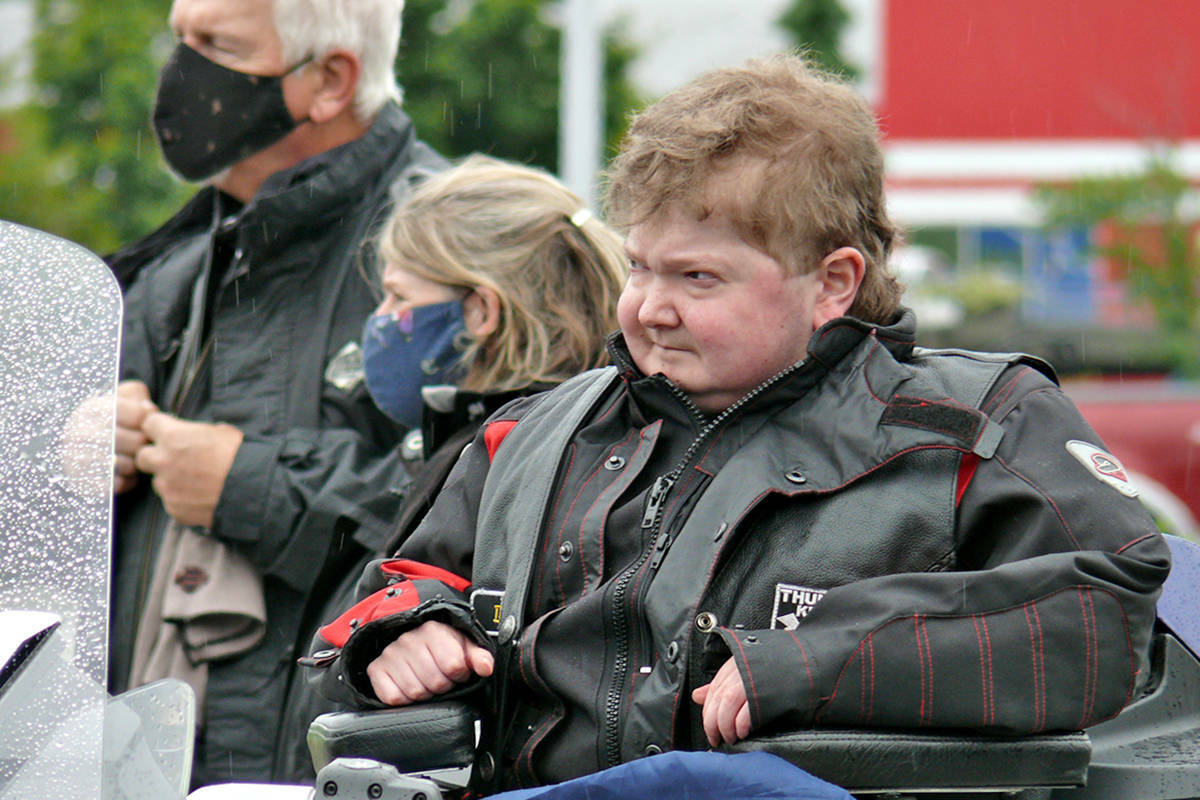 Doug Penner awaited start of the rainy 2021 edition of the fundraising ride that bears his name, held under strict COVID-19 protocols. This year, the annual event returns to its original route, with a barbecue wrap-up, again. (Langley Advance Times file)

After two years of limits on public exposure, where the ride route had to be trimmed and the barbecue cancelled, Doug’s dad, Cam, would like the 16th edition of the ride to be a “celebration year.”

They will also be celebrating Doug’s “bad-ass” accessible SUV that was the result of three years of fundraising and will be on view at the start.

Doug didn’t waste any time tricking it out, his father reported.

“Its been wrapped,” Cam said.

Doug, a AC-DC and Def Leppard fan, is also upgrading the sound system, which lost a factory subwoofer when it was modified to be wheelchair accesible.

Cam said it feels a little “weird” to be planning a ride that doesn’t require stringent COVID-19 protocols.

“It hasn’t sunk in yet,” he remarked.

At the same time, Cam wants the ride to “remember all those DMD boys who had a tough couple of years with COVID. Muscular Dystrophy Canada really needs our help with fundraising. It’s been hard times.”

It will be Doug’s third ride with a broken leg, after suffering what Cam described as a “small fracture on a slip during a transfer.”

Ride For Doug, Vancouver Island edition, is expected to return this fall, likely in September.

DMD is an inherited disorder that affects one in 5,000 males at birth. It very rarely affects girls.