Langley-raised mother Jade Schievink has faced all odds with the birth of her third child, London, who is currently on life support at BC Children’s Hospital.

More than 300 people in the community have rallied behind the family to raise funds to support transporation, accomodation, and various costs associated with a sick child, by crowdfunding approximately $14,000 on GoFundMe in just a few days.

In October 2017, baby London was born at Surrey Memorial Hospital. She was just 24 weeks old, weighing one pound, two ounces.

“I was told she would not make it,” Mom shared.

“I had three things wrong with my pregnancy that were very serious and basically the doctors told me any women who have any one of those things, their babies do not make it. And I had all three,” she recounted.

“They said she could be deaf, blind, in a wheelchair. And she has defeated all odds and beyond. She’s gone so far past what they said, and she’s a true miracle. She should not have been here,” Schievink explained.

And now the 1.5-year-old is back in the hospital to once again fight for her life.

“I look at her and I feel like this is the sickest she’s ever been, and it’s heartbreaking,” Schievink shared.

this amazing talented mama @andwhetherpigshavewings made me this photo of London with 7 angels with warm light protecting, healing, and guarding London until she heals and I am balling. 😭✨💛

Earlier in January, London was admitted back to Surrey Memorial Hospital for pneumonia. After leaving the hospital, Schievink said she thought things would get better.

But they only got worse.

Two weeks ago, London came down with a cold and was rushed to BC Children’s Hospital where she was admitted to the pediatric intensive care unit, and as of press deadline that’s where she remained.

London’s health has now declined to such a critical condition, that she is sedated and on life support.

“She has a high risk of passing away right now,” Schievink added.

Aside from London’s birth, Schievink said her child’s health has been fairly good until now.

“She just smiles in every photo. She’s so happy and full of life. She’s just like a regular baby,” Mom added..

“Her smile is contagious and she has the world rooting for her right now. She’s the most precious, happiest, loving baby.”

Schievink, her husband Cody McConnell, and their children Ayla, 7, Kashton, 5, and London recently moved from Langley to Surrey.

As a result, the family has been sleeping in hotels in Vancouver or at the hospital room that London stays in – to lessen travel time – as they don’t qualify to stay at the Ronald McDonald House on the BC Children’s Hospital grounds, due to proximity.

To help offset the family’s travel costs and accommodations, a GoFundMe was set up earlier this week to help Schievink and her family during London’s stay at BC Children’s Hospital.

Those interested in donating can do so by going to: https://www.gofundme.com/support-for-london-amp-family?utm_source=facebook&utm_medium=social&utm_campaign=fb_dn_cpgntopstickysmall_r 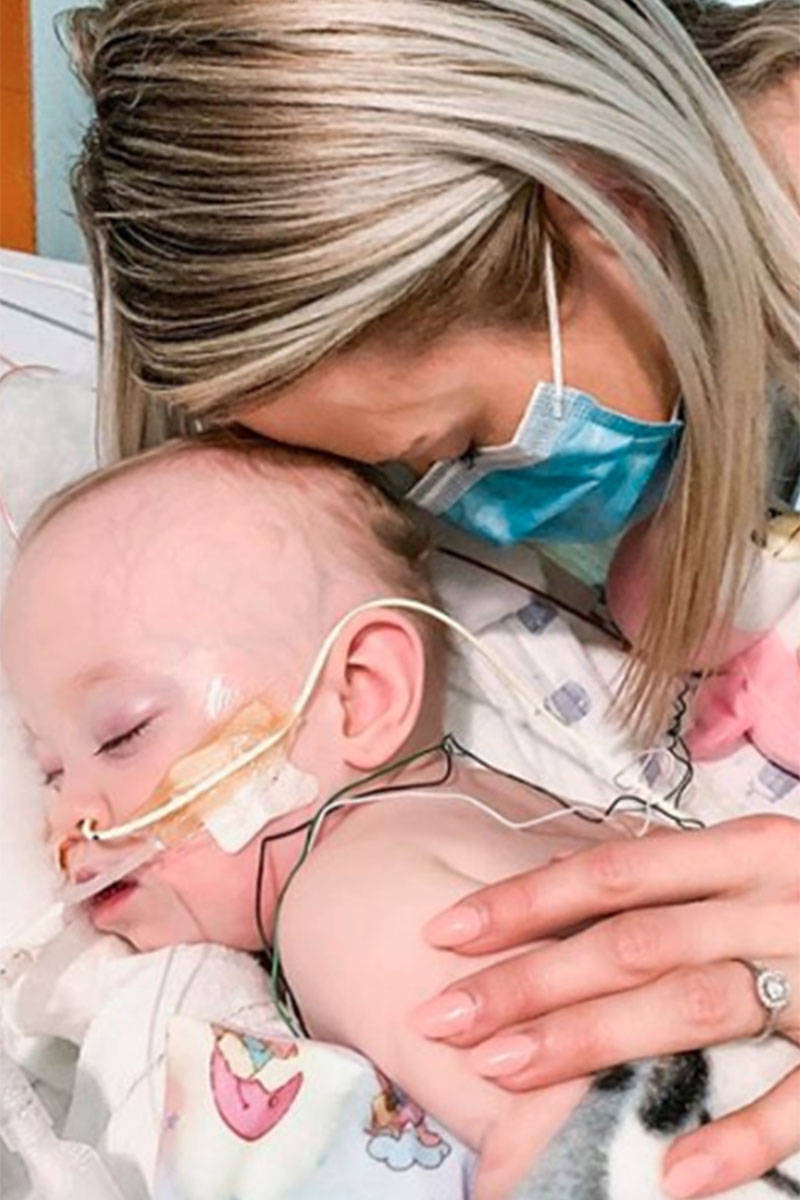 Young London fights for her life at BC Children’s Hospital, with the support of her mother Jade Schievink. Submitted photo