Christmas is a time of joy and a time to be grateful for the many gifts of life that most of us enjoy.

It is also a time to help spread those gifts and joy around to those among us who have come through or are currently facing hard times.

This is the motivation behind many individuals as well as service organizations in the Aldergrove community who have stepped up to lend a helping hand to those in need.

Among those who have been coping with difficult circumstances, it has been cancer that has been particularly hard-hitting and heart-breaking for families. This has been where the Aldergrove community members and organizations have been especially outstanding.

Earlier this year cancer claimed the life of a middle-aged husband and father of four young daughters in Aldergrove. Don Graham, who had been the main ‘bread-winner’ for his family, lost his battle with cancer on July 20.

The community stepped up with several fundraisers to help the family stay on top of living expenses while Don’s wife Lenka stayed at home to take care of Don — and their children — for his last few months in this world.

Thousands of dollars were raised in the community during the past year, and on Dec. 15, the Aldergrove Elks and the Aldergrove Save On Foods brought some Christmas cheer to the family by providing a shopping spree for Lenka and the four girls.

More than $1,100 was spent on food as well as gifts for the family. And some of those gifts were also for others less fortunate in the community.

Aldergrove Elks president Guy Whitford told The Aldergrove Star that when the Elks met with the Grahams recently to discuss the shopping spree, the daughters said that they wished to share some of the gifts with friends at their school who were also in difficult times.

“I think it says something of the girls’ character that they want to give before they receive,” said Whitford.

A similar outpouring of community support has been growing for another Aldergrove family dealing with cancer.

Little Ariel Seydel was not yet four years old when she was diagnosed with craniopharyngioma, a rare type of brain tumor derived from pituitary gland embryonic tissue that occurs most commonly in children. Her young and doting parents, Shea and Makaila, were alerted to it when Ariel complained that she could not see out of her left eye. An MRI at Nanaimo hospital confirmed the tumor last February.

“The tumor is intertwined between her optic nerve and pituitary gland and it stretched her optic nerve so much it detached and she has lost her vision in that eye,” said Makaila, age 22.

The family was referred to Children’s Hospital in Vancouver, where doctors said the only option was to insert a shunt, which would drain the tumor as well as provide local application of chemotherapy.

Since the chemo is applied directly to Ariel’s tumor in her head instead of intravenously, there are fewer side effects such as hair loss. However, the three-times weekly treatments do require a local anesthetic and it is hard on her and leaves her fatigued each time.

Ariel underwent her first round of chemo — thrice-weekly treatments over four weeks — in May, and is undergoing her second round of 12 chemo treatments this month. After her 12th treatment on Dec. 31, she will be re-assessed to determine the next step.

Faced with the need for regular trips to Children’s Hospital, the family cut their ties to Nanaimo and moved to an Aldergrove basement suite in June.

“It’s no more than an hour to get there from Aldergrove, with no long ferry trips, and Aldergrove is much more affordable than living in Vancouver,” said Shea.

Still, it’s been a challenge for the young couple to make ends meet, as Shea is on a disability pension and Makaila has just started a job at an Abbotsford furniture store. And they have no family or community connections here on the mainland to help them get through the hard times.

This is where the Aldergrove community has stepped up to help the family. Through word of mouth and social media, Aldergrove residents from all walks of life have simply showed up at the family’s door, bearing baskets of food and other gifts such as gas cards.

When The Aldergrove Star visited the family on Saturday, Dec. 15, to drop off more grocery and gas cards, Ariel was having a “good day” creating a gingerbread house and chatting away with The Star reporter about little girl things. Shea and Makaila were beaming as well, pleased that she was enjoying her day, after a stress-filled day before with her chemo treatment.

“She has her good days and bad days, and we live for the good days,” said Makaila.

The Aldergrove Legion became aware of the family’s needs this week and vice president Karen Hobbis said the Legion will personally deliver a Christmas hamper of food along with gifts on Sunday, Dec. 16.

“I had heard about the family on social media and it was like $20 or so from each of us, but when we (the Legion) became aware of the family I called Makaila up and I now understand how serious their situation is, how great their need is,” said Hobbis.

“So we will be bringing extra gifts, clothes and books for Ariel, little presents for the parents, a $100 gift card for Walmart and $150 in gas cards to help them get to the hospital this month, along with the Christmas hamper of food.

“And we will look at their situation again in the new year to see what they need once the chemo is completed. This is what the Legion is all about,” said Hobbis. 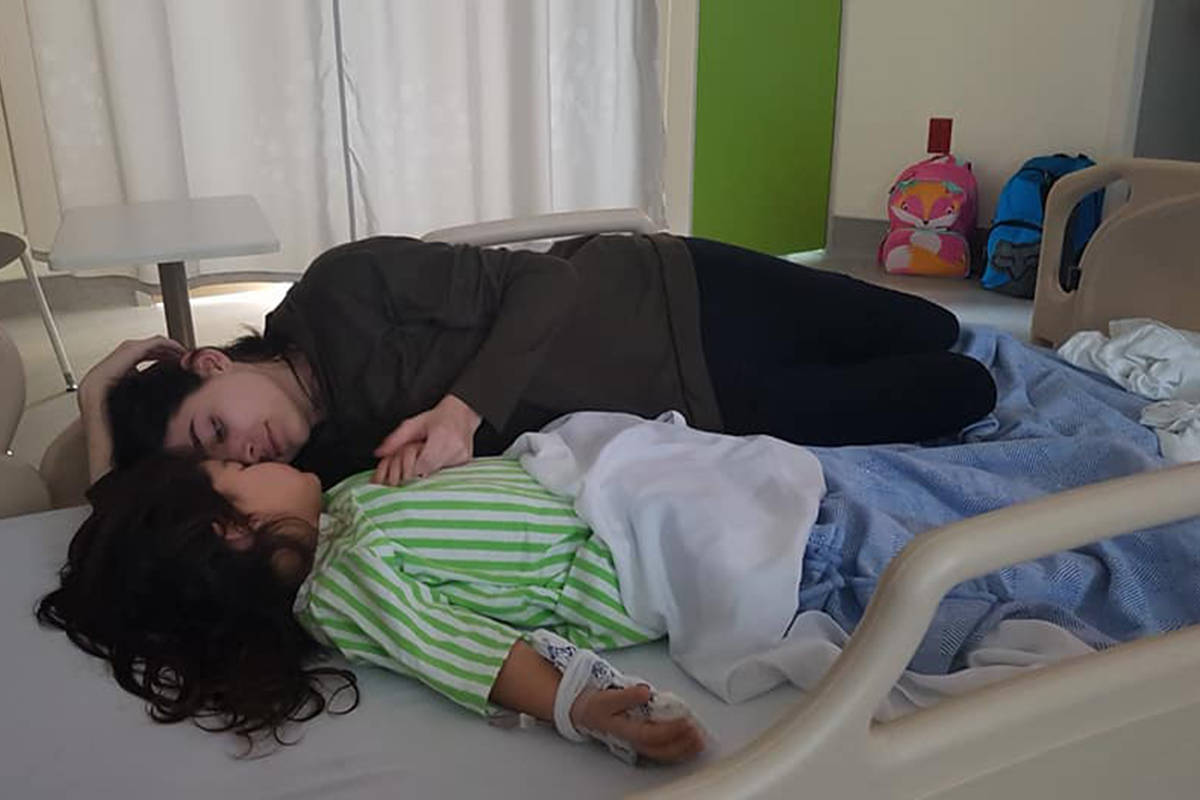 SUBMITTED PHOTO: Ariel and her parents, Makaila and Shea, are having a tough Christmas getting through Ariel’s chemo treatments at Children’s Hospital.

VIDEO: why the founder of Kimz Angels feels it’s “sad” the charitable group has grown