A Langley-built replica of the York boats used to transport cargo during the days of the Canadian fur trade will re-trace the route the boats used to take from Fort Hope to Fort Langley for Canada’s 150th anniversary.

The 32-foot boat, built three years ago by the the Bedford Rowing Society (BRS), will leave Fort Hope of August 4 and arrive at Fort Langley on August 7 in time to celebrate Brigade Days.

Last year, in recognition of the support provided by Kurt and Brenda Alberts to the Bedford Rowing Society, the York boat was renamed the “Brenda A” in memory of the art gallery owner and community volunteer who passed away in July of 2016 after a short battle with cancer.

The plans call for the Brenda A. to begin the journey at the Hope Mountain Centre, which has opened up the historic Hudson Bay Company’s 74-kilometre trail from Hope to Tulameen.

The send off from the centre will include a group marching from the original Fort Hope site to the encampment on the river bank where the boat will cast off.

The oarsmen and members of the BRS will row the boat to Fort Langley Airport.

On August 7, the boat will be joined by dignitaries and the canoes for their final approach at mid-day to the foreshore in Fort Langley.

MP John Aldag and Township of Langley Counsellor Blair Whitmarsh are scheduled to man oars for part of the journey.

John Aldag is credited by the BRS as instrumental in providing an area of land below the Fort for building and operating the boat, while the Township of Langley was supportive in providing a permanent home on the banks for the York Boat/bateau.

York boats were preferred as cargo carriers to the birchbark canoes by some in the fur trade because they carried more cargo and could take more punishment.

They had a pointed bow, a flat bottom, and a stern angled upward to make beaching and launching easier.

The boat was propelled by oars and by a square canvas sail and had a crew of between six and eight men.

While canoes were vulnerable to tears and punctures, the York boat’s heavy wood construction “could simply bounce off or grind past obstacles that could easily inflict fatal damage on a soft-hulled vessel” a Wikipedia entry notes.

The negative side was the weight, which meant York boast crews couldn’t portage the vessel overland by hand the way canoeists could.

Crews would have to cut a path, lay log rollers and drag the boat. 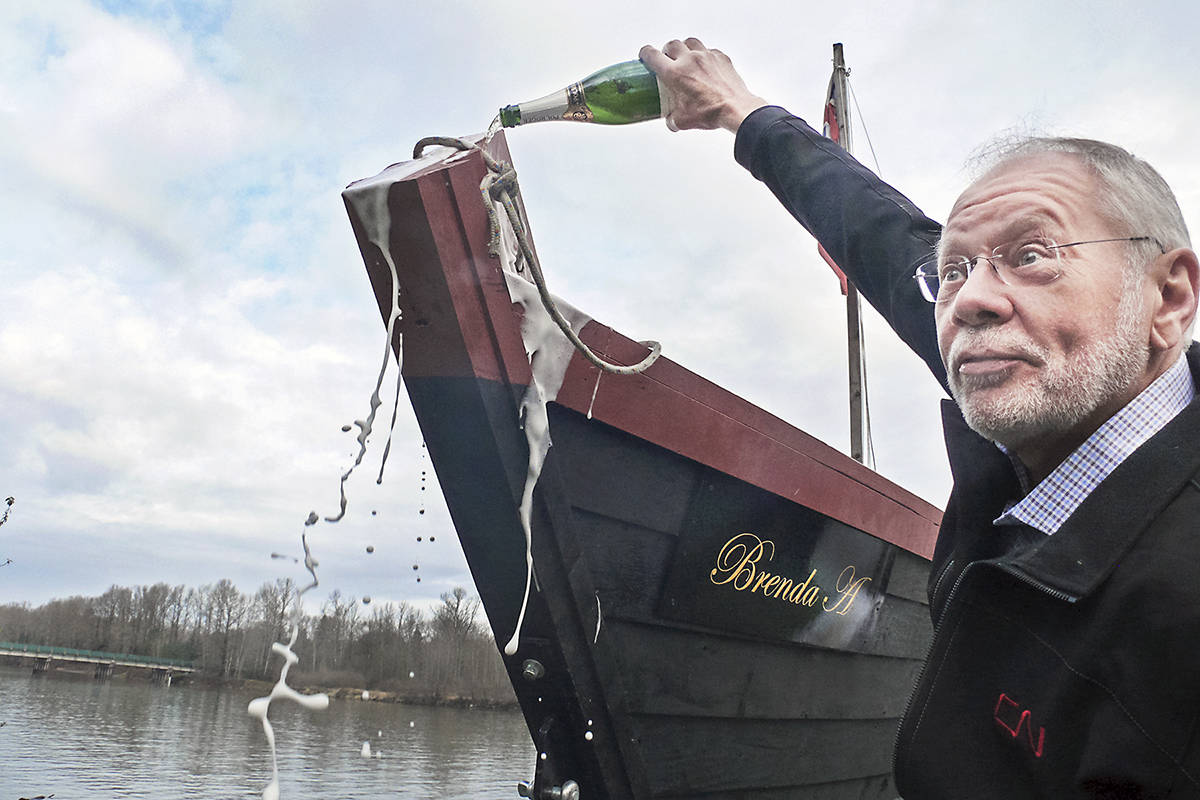 Kurt Alberts christens the “Brenda A.” Now named to honour his late wife, the replica York boat was created by the Bedford Rowing Society in tribute to the workhorse wooden boats that served Fort Langley during the fur trade. File photo

SLIDE SHOW: A close-up look at vintage aircraft in Langley