“The box is full,” a pleased Thomson noted, heavy with coins and bills.

Many who contributed thanked the retired lieutenant for his service.

“Much thank-yous,” is how he responded.

During his 25 years in the military, Thomson served in Cyprus, Egypt and Germany, maintaining and repairing armoured personnel carriers and tanks.

He describes himself as a “third generation soldier.”

He is the son of a Second World War tank commander, who barely survived when his Sherman tank got shot up during the allied invasion of Europe.

On Monday, the grandfather of eight and great-grandfather of two was in uniform with his United Nations peacekeeper’s blue beret, and medals which chart the stages of his career, beginning with tours of duty with NATO, then Cyprus, and Egypt, before ending with an award for service from the Canadian Forces.

“Then I quit,” Thomson smiled. 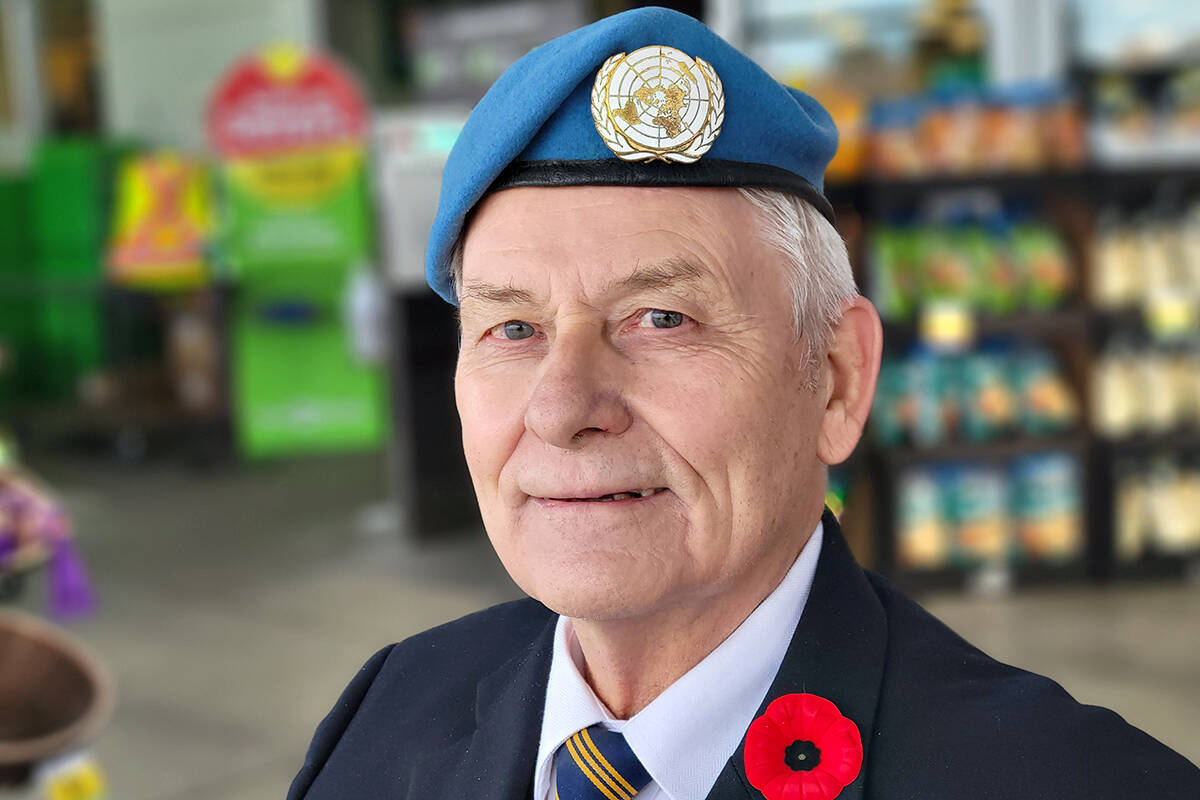 In 1981, he returned to civilian life, and completed a four-year degree in industrial education, in two years, then going on to teach for 18 years.

While Thomson is a Langley resident, he is campaigning on behalf of the Cloverdale legion, because the Langley City branch went under a few years ago, requiring the Aldergrove and Cloverdale legions to expand their coverage.

Langley Legion Branch 21 ended up in the red after moving from its former home on Eastleigh Crescent and finally closed in 2018.

In addition to searching out legion members like Thomson to make a contribution, or poppy boxes in local businesses, Canadians can also make a donation towards the campaign at mypoppy.ca, where they can create a digital poppy, add a customized commemoration and share it on social media.

Donations to the Poppy Fund are placed in trust to be used for the care and benevolent support of veterans and their dependents.

Poppy Funds may be used for grants for food, heating costs, clothing, prescription medication, medical appliances and equipment, essential home repairs and emergency shelter or assistance; housing accommodation and care facilities and many other benefits.

Halloween fireworks no fun for dogs in Langley

INTERACTIVE MAP: Langley is lighting up for the holidays