The worst part of the job was the telegrams, Elsie Reid recalls.

As an 18-year-old in Yorkshire, England, during the Second World War, she worked as a radio operator at an air force base, maintaining contact with the bombers as they headed across the Channel to bomb German targets.

When some didn’t make it back, telegrams had be written and sent to their families.

“It was very hard,” Reid recalled.

“If you were on day shift, there was always telegrams to be sent out to the relatives of the guys who hadn’t come back. The first time I had to do it, I never got through that shift. I was crying so hard, someone had to come and take over.”

“You didn’t know the guys, but you know, it still got you.”

Reid, 96, now lives in Langley, the result of a Canadian soldier asking her to dance one evening. It happened at a local establishment while both were off-duty.

Jim Jones, an aero engine mechanic from B.C, was light on his feet and made a good impression.

“He was cheeky. He was a lot of fun, and he was a good dancer,” Reid described.

That was important for a young woman who loved to dance.

“If you find a good dancer, you stick with him,” she observed.

Jones couldn’t have helped noticing Reid, a beauty contest winner with the nickname “Bubbles” because she loved to laugh.

She still laughs about winning that beauty contest, where one judge informed her she had “come-to-bed-eyes.”

Reid likes to tell the story about a moment, when, for a panicked second, the teenager thought a German spy had somehow invaded the base where she worked.

“I was going down the hallway and I saw this German [in uniform] coming towards me,” Reid laughed.

Flustered, she fled, only to discover the man she saw was indeed a spy, but not for the enemy.

“It was one of our guys dressed as a German and he was going to be dropped behind the German lines to find out what he could about what they were doing.” 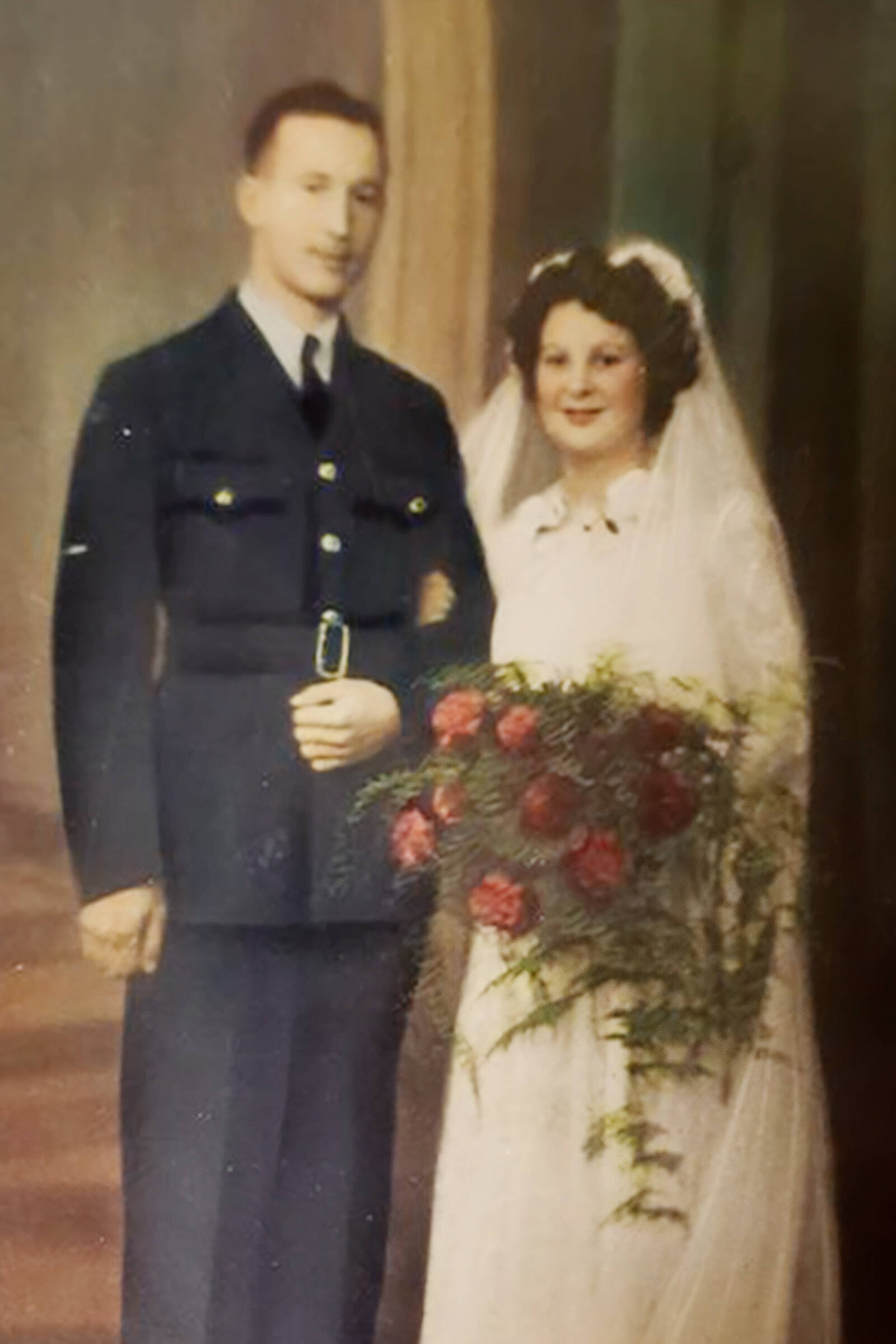 When she married Canadian soldier Jim Jones, Elsie Reid remembers wearing something borrowed – her wedding dress - and something both blue and new - a garter. (Courtesy Elsie Reid family)

Reid married her Canadian in England, then sailed to Canada as one of many “war brides” aboard the Queen Mary, the former liner turned troop ship during the war, then converted back to post-war duty to bring the brides to Canada.

She remembers having to take her marriage vows in a borrowed wedding dress, because with rationing during the war, clothing was issued using coupons.

“Being in the air force, we didn’t have many coupons.”

In addition to the “something borrowed” she had something new, and blue, to follow the tradition.

“I had a blue garter,” she explained.

Reid had to have permission of her commanding officer to marry, and it was granted with a letter, possibly tongue-in-cheek, that said she had “deserted” her post by getting married, and was discharged from service.

Reid and Jones had five children, two boys and three girls, before they split up and she remarried.

She now lives with her oldest daughter, Patricia Garrett, in Langley’s Otter neighbourhood.

According to the online Canadian Encyclopedia more than one million Canadians and Newfoundlanders served in the a forces Canadian army, navy and air force during the Second World War.

By the end of 1946, there had been 48,000 marriages between Canadian servicemen and women from other countries; these unions produced 22,000 children

740 turn out for Santa visit to Canadian Museum of Flight