The B.C. Farm Museum in Fort Langley is still rearranging it’s exhibits after a movie production company used the space for a Christmas movie during the off-season, converting the main exhibition hall into the community centre and museum called for in the script.

That required the temporary relocation of many exhibits and it turned out to be a good thing, said museum librarian and membership secretary Hilary Ruffini.

“The only thing they couldn’t move was the plane (that hangs from the ceiling),” Ruffini said.

“It was an opportunity to clean in places we normally can’t get at.”

Ruffini was being interviewed by The Times on Sunday during a low-key re-opening of the museum located at 9131 King Street in Fort Langley.

The B.C. Farm Museum in Fort Langley was the result of the donation of a single high-cut walking hand plow 63 years ago to the University of British Columbia (UBC).

After the British Columbia Farm Machinery Association was formed to raise funds for an agricultural museum at UBC, the location was switched to Fort Langley.

Then, the first choice for a Fort Langley site ended up with a road running through it when the federal government decided to restore the historic fur trading post.

A 33-foot lot on King Street was then donated to the museum by the Township council, on condition the association would pay for buying another 66 foot lot next to it, which it did.

Nine years after the deal was done, the first of two buildings officially opened on Nov 19, 1966.

Over the years, the collection has expanded to include more than 5,000 historical artifacts and over 10,000 books, pamphlets and manuals of historical information, a valuable resource for researchers.

Since federal funding dried up in 1990, the museum has operated as an all-volunteer facility, functioning because of long hours of unpaid work put in by supporters.

Last year, the museum obtained funding for new murals inside and outside and and high-tech interactive terminals.

The downstairs workshop area underwent extensive renovations that include moving walls, adding a new heat source and other enhancements.

READ MORE: VIDEO: Train Day at the BC Farm Museum

Run by volunteers, the museum is a non-profit organization that charges a small admission fee to help cover the cost of operations.

A $10 yearly membership allows access all year as well as gift shop discounts.

For much more information go to www.bcfma.com. 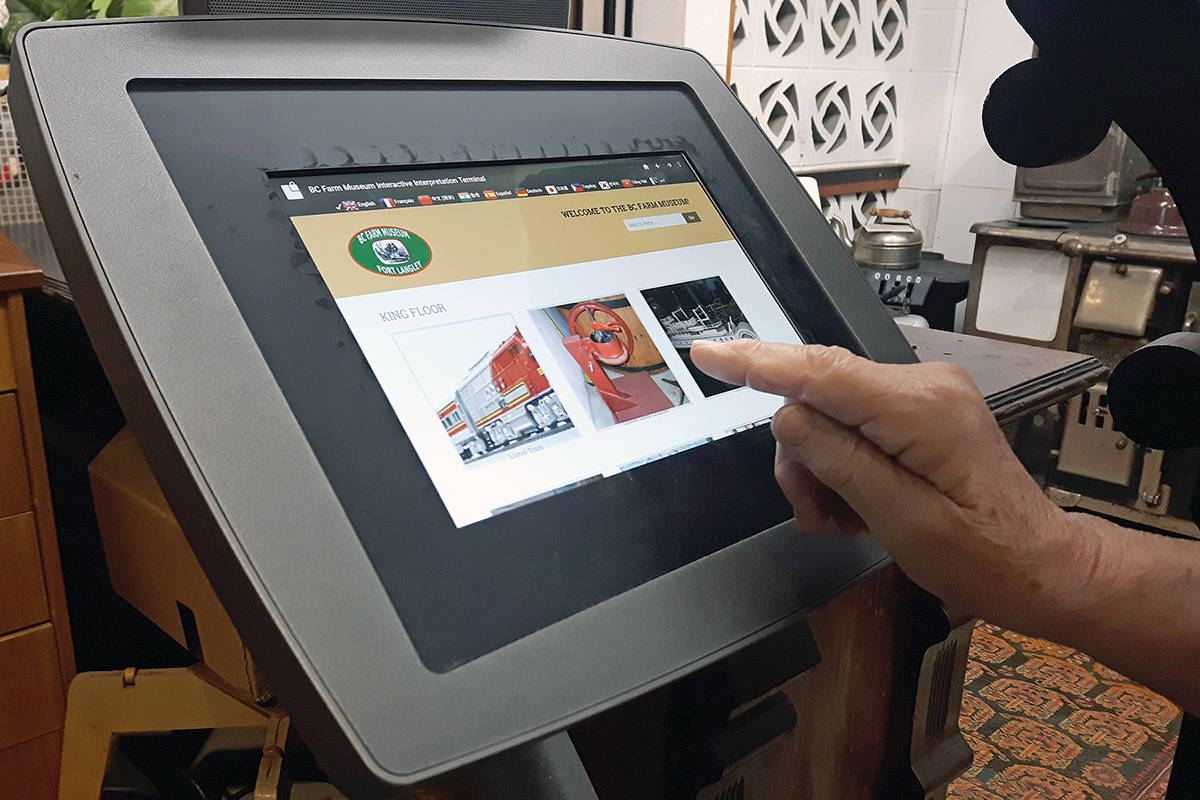 One of the new touchscreen displays at the B.C. Farm Museum. Dan Ferguson Langley Times